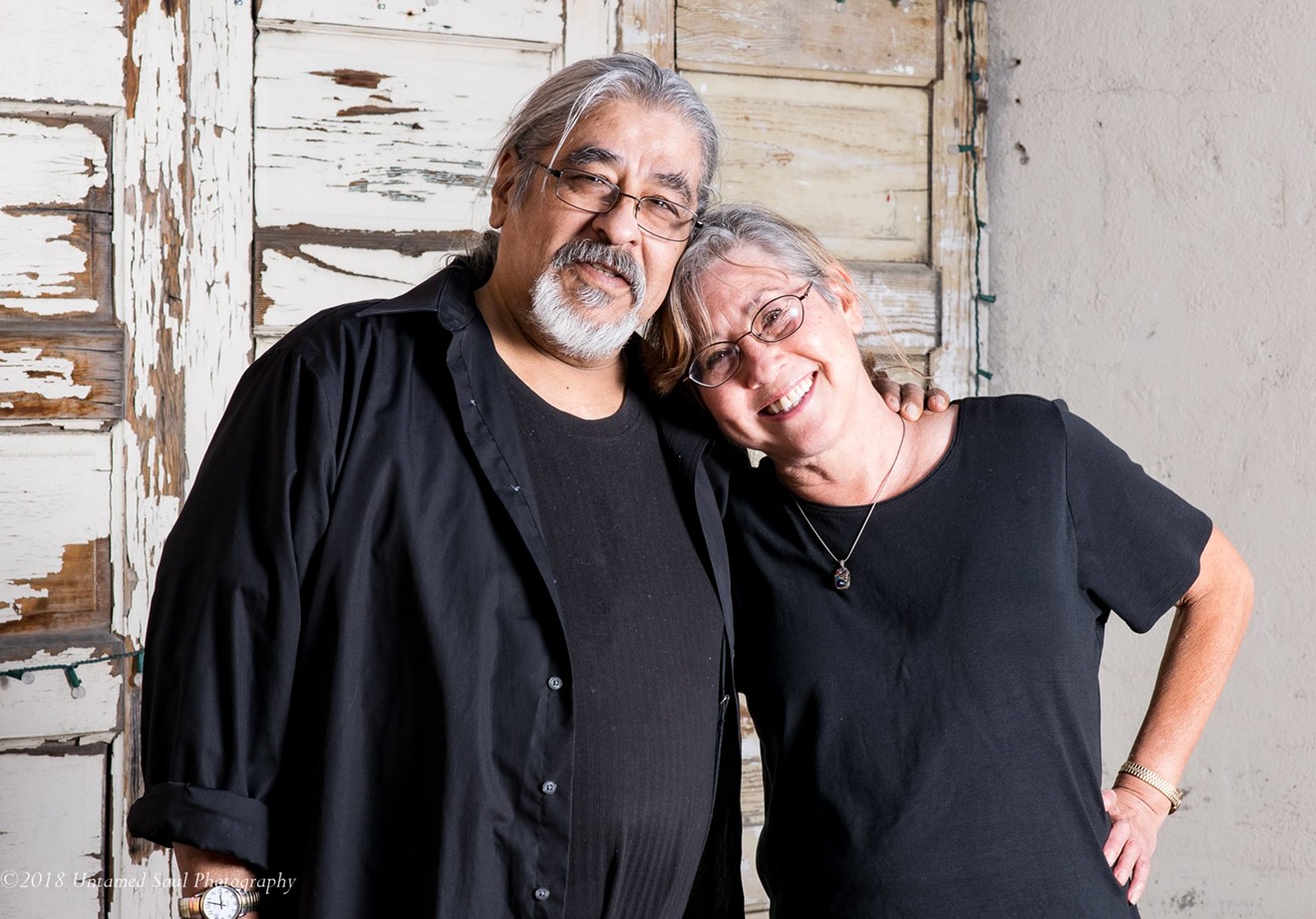 Chicano arts power couple Stevon and Arlette Lucero. Photo Credit: Tammy Montoya Yancey
Stevon Lucero, who passed away on Sunday, November 28, at the age of 72, was born in Laramie, Wyoming, on the Day of the Dead: November 2, 1949. His father, Miguel Saens, an illegal immigrant at the time of his birth, had chosen to go by the surname Lucero north of the border, and Stevon was encouraged to be an artist from childhood by his young mother, Ruth Gonzales.

“My grandma wanted him to be an artist,” says Tana Lucero, Stevon’s eldest daughter. “She wouldn't ever let him use his right hand. I guess she thought that if she could turn him into a lefty, that would make him an artist. She was his biggest fan. She was so supportive, and always a champion for his art.”

Lucero’s drive as an artist was no fluke. Though he did begin to formally study art at the University of Wyoming, the artist was already forming his own nonconformist ideas about the purpose of art. He eventually dropped out and in 1976 moved to Denver with Tana's mother to pursue his own path.

Lucero and Tana’s mother split up a year or two after moving to Denver. He later found lasting harmony with his partner of forty years, fellow artist Arlette Lucero. They had two sons, Paul and Joshua, and shared a commitment to raise up and give back to their friends in the Chicano arts community.

“They were such a good team: so ornery, so loyal and loving. They were always all about the art, and living that authentic life,” Tana notes.

Arlette Lucero knew there was something special about Stevon even before she formally met him. “I saw his ‘Rainbow Boy’ in the newspaper and wanted to meet him,” she recalls. “I clipped out the picture, went to his show and waited endlessly for him to stop talking to others. I never got to meet him that night, but was later introduced to him by our mutual friend Tony Shearer.”

Lucero teamed up in 1978 with other Chicano artists in his constellation, including Jerry Jaramillo, Al Sanchez and Carlos Sandoval, to create the Chicano Humanities and Arts Council (CHAC), which he envisioned as an interdisciplinary art center. Tana calls it a turning point: “There was a lot of energy at that time in Denver. They started circling each other, and decided to put together an organization to enable and empower artists — something like an LLC that was a nonprofit — so they could get funding to help artists navigate financially. Whoever wanted to join, could. CHAC’s been an ebb and flow over the years, but has always had a place in the art scene.”

Lucero was a familiar sight over the years at CHAC openings, where he would hold court in his own gallery nook, relating his inspirational dreams to all who would listen and offering advice to emerging artists.

“He was so committed to bringing spirit into the art world and supporting young artists, being the guide and mentor he could be for anyone who wanted to talk to him,” Tana says. “People would find him, and they would hang with him, talking about the universe.”

Lucero primarily painted imagery in two categories of his own invention: metarealism, a style visually related to surrealism, but with a spiritual rather than psychological nature; and neo-pre-Columbian art, a modern repackaging of the stories and ancient cultural symbols of Mexico and Central America. He also made traditional art, worked on murals and created the diorama background for the Denver Museum of Nature & Science’s “Tlatleloco Market” display in 1992.
click to enlarge

Detail of "Indigenous Futurist Dreamscapes Lounge."
Kennedy Cottrell
“He was first influenced by the painting philosophy of metarealism in Laramie,” Tana says. “It’s been his core philosophy for his full adult life. Everything he did, he saw from a spiritual lens, and that informed us, too — we all have that peculiar sensibility. That’s not to say he didn’t beat himself up about not being the bread-winning stereotype of what a dad is supposed to be. What he gave us was so precious and profound.

“He lived what he preached, and suffered for his art,” she continues. “He loved people, the community and the earth. He was a quester, a mystic looking for answers. He was so joyful in his creative process, and he wasn't a glamorous Indigenous artist. He didn't have that look — he was not a rock star-type person. He had that look of esteem that happens when you grow up in a cowboy town and are treated poorly.”

He was also prolific. “He must have donated a million paintings over the years,” Tana muses. “He left behind rooms and rooms of art. We don’t know how we’ll ever catalog all of it.

“But that’s what he loved,” she adds. “He was driven, always refining the ideas. As he grew as a person, he could look at an image and understand it better. He’d look at paintings from thirty years ago, and even redid some of them.”

When he wasn’t painting, Lucero indulged in his love of pop culture. “He was quirky; he was a huge Jack Kirby fan," Tana notes. “He loved all that stuff — comic books, monster figurines. He was a collector with a sense of playfulness that comes out in his pieces. It’s like he was just a little kid at heart.”

Molina, one of many young artists Lucero mentored, remembers him with a new poem, Ode to the Master Artist:

When the final tear arrives and dries on the third day,
when all that was not complete is reconciled,
after all the ceremonies close, a blue giant
will remain standing in the grand spectacles of space,
etched lovingly into the memories of social chaos.
There is a drum beating at the base of every human heart,
the grit of sand and mud and dirt, molding crimson clay
into visions that haunt the wakeful spirit.
Let it be known that he beat death multiple times,
a gentle trickster taking the reins of his final rodeo,
resurrecting to complete his Masterpiece,
to remind himself and his friends of the insatiable gift,
to bask in the last bursts of tangerine and turquoise;
king Chicano in plain clothes painting his dreamscapes,
casually sailing east into the prussian blue sky,
making his final jokes, enjoying the resplendent parade,
waving farewell to old doubts, philosophizing wildly
about the Heyoka and the Mexica, telling his faraway tales
of old souls who lit up his many days and nights.
He was quick to remind you about the Long Count.
Let it be known that he did his thing on his own terms.
Let it be known that his mission was to put god back into art,
to be the grand fool, to bring joyful comedy to the tragedies,
laying his beloved soul bare for the world to see:
Metarealist mirrors of jade and obsidian futures
that root humanity back into earth, water and sky.
Let it be known that he completed his quest.
Master Artist, master teacher, treasured friend,
master of the dimensions, we are with you always
until the end of the age and beyond.


Stevon Lucero transitioned at home after a long hospitalization and period of rehab. A celebration of his life will be held from 11 a.m. to 2 p.m. Sunday, December 5, at Evergreen Memorial Park, 26624 North Turkey Creek Road; there will be Aztec dancers, music and food, and guests can also bring dishes.

A GoFundMe has been started to help the family with funeral and other expenses.
KEEP WESTWORD FREE... Since we started Westword, it has been defined as the free, independent voice of Denver, and we'd like to keep it that way. With local media under siege, it's more important than ever for us to rally support behind funding our local journalism. You can help by participating in our "I Support" program, allowing us to keep offering readers access to our incisive coverage of local news, food and culture with no paywalls.
Make a one-time donation today for as little as $1.