Volunteers standing in front of Crossroads Theater in a 2016 photo. Anthony Camera
The Crossroads Theater at Five Points could be closing soon, according to Dennis Malone, director of operations at Hope Communities. The theater, which sits on the ground level of Hope's Welton Homes at the Point apartments, was built in 2007 by visionary Kurt Lewis and has endured its share of ups and downs since then. For a time, it was run by Denver Arts & Venues, with minimal success, before it became headquarters for the Center for Spiritual Living for three years. Then in January 2016, a young theater group named Crossroads Creative took over the space.

Crossroads Creative, headed by Jaryd Smart and Erik Rodne, has used the space to host community events, comedy shows, original plays and concerts. But as is the case with many small theaters, paying rent without consistently packed houses can be tough, and the group has fallen behind. That puts the financial burden on Hope Communities, an affordable-housing nonprofit. “It's not going well," Malone says. "They haven't been able to meet their expenses, and they haven't been able to make rent payments, and they're really, really struggling. They just can't keep it as a daily or even a weekly operation.” 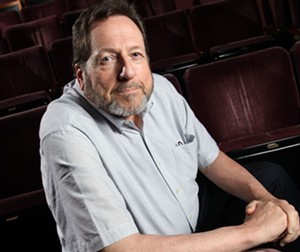 Dennis Malone, director of operations at Hope Communities.
Anthony Camera
While in limbo, Crossroads Creative will continue to host events, and there are at least two more on the books. The first is a comedy show, NICE!, on March 25, with local sketch group The Agency; it was included on Byron Graham's list of the ten best comedy shows to see in Denver this month. The second is Crowns: The Gospel Musical, slated to run from March 31 through April 14. And after that?

Although there are no firm dates set for when Crossroads Creative must make good on the rent or get out, Malone thinks Crowns could be the last play in the theater. Different proposals and ideas for the space have been coming in, but he declines to discuss specifics.“I would simply say that we are exploring options," Malone says. "What those options might be is across the board. We really have to think about where it's going, because it's not doing us any good. We're fronting the mortgage payments and things, and not having any income coming in.”

Rodne believes Crossroads Creative can still make it work, though. “We have a formal request for first right of refusal should a sale be planned between Hope Communities and any interested party,” he says. “Regarding the closing of Crossroads, we have seemingly always faced this rhetoric.”

With Hope continuing to subsidize Crossroads Creative, rhetoric could soon turn into reality, however. “I think we're at that point where we have to make a decision pretty soon, because we can't keep just adding to our debt,” Malone says. “We're in the affordable-housing business, not the theater business, and that's one of the problems that we have.”