Richard Crowther's Home, a Lab for Architectural Ecology, Could Be Demolished 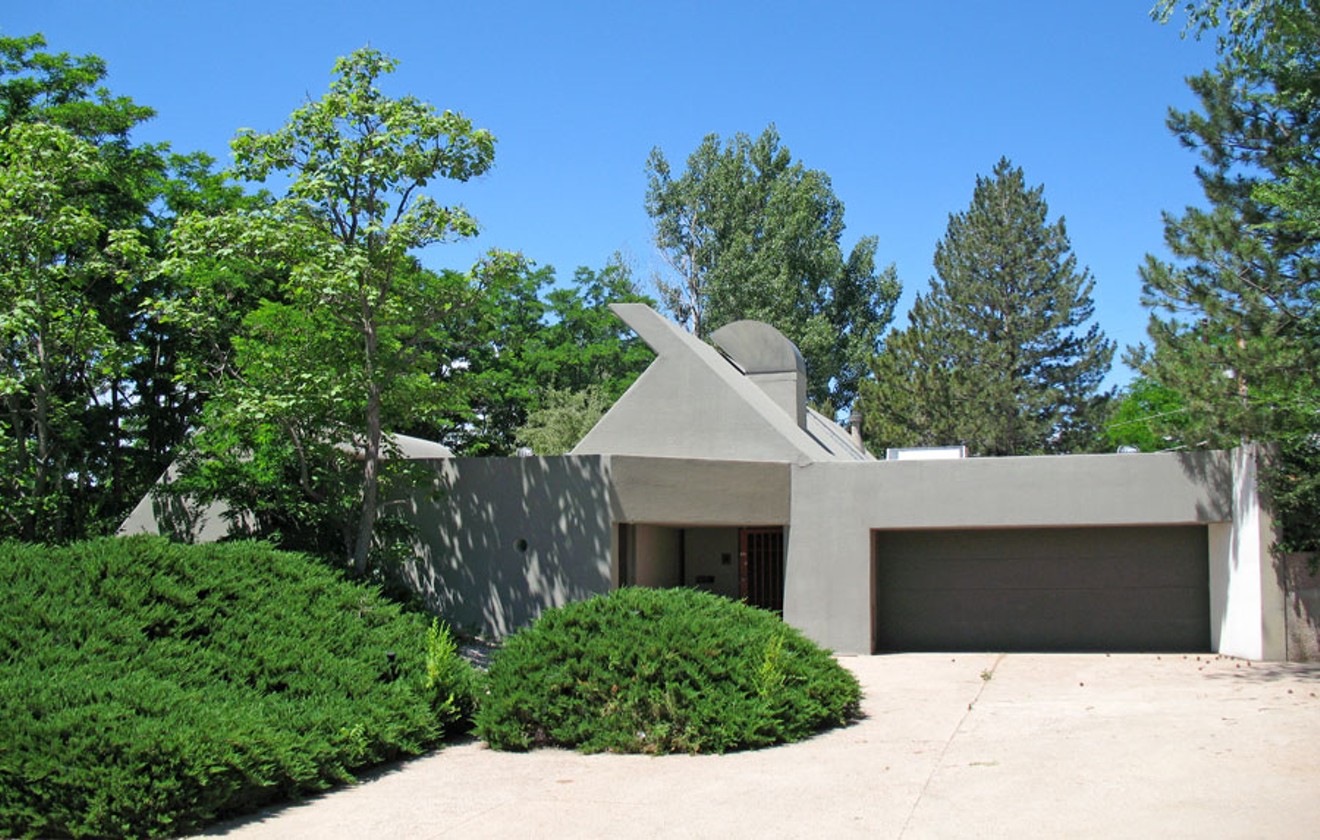 Richard Crowther designed his own house in Cherry Creek North in 1979. Shannon Stanbro/5280mod
The groundbreaking structure that renowned architect Richard Crowther created at 401 Madison Street as his own home has been purchased by Denver-based Mag Builders, which wants to scrape the structure and build two duplexes — if the city determines it is not a landmark and issues a Certificate for Demolition Eligibility. You can see the Denver Community Planning and Neighborhood report here; keep reading for Michael Paglia's piece on Richard Crowther published on January 11, 2007, shortly after Crowther passed away.

In the last twenty years, the "Built Green" movement has gone mainstream, with big developers such as ForestCity at Stapleton promoting the environmentally friendly features being incorporated into their buildings. But a generation or two ago, only kooks or visionaries thought about such an issue.

Here in Denver, we had a pioneer of architectural ecology: Richard Crowther. As an architect, Crowther made the relationship of the structure to the environment a key part of his commercial and residential designs, and he became internationally famous for his theoretical writings on the subject. But unlike the works of so many others who've embraced the Built Green mantra, Crowther's are not ugly neo-traditional buildings; rather, they are shamelessly modern and breathtakingly beautiful. They show off groundbreaking technologies contained within vanguard formal expressions, and the best of them are as sophisticated as anything anywhere in the world.

Crowther was born in Newark, New Jersey, in 1910, and moved to San Diego as a young man. Though he did have some formal training, Crowther, as was common to his generation, learned on the job, starting with lighting design for amusement parks and coming up through the profession. He arrived in Denver in 1948 and was hired by Lakeside owner Ben Krasner, who wanted him to give the park a partial facelift. It was a modest start, but within a few years, Crowther had a built a booming architectural business. He built several luxury homes in Cherry Creek North, an upscale neighborhood that he helped start. He also did several office and retail buildings in the same area. Set among the shops, for example, is a striking two-part office complex at 310 Steele Street and 3201 East Third Avenue. The sleek, low-slung buildings sport ribbon windows slashing across light-colored walls, flat roofs at different heights and triangular atriums marking the skyline.

Among Crowther's most important commissions were the three Cinerama theaters he did for the Cooper Trust in the early 1960s. One was built at 960 South Colorado Boulevard in Denver, with another in Minneapolis and a third in Omaha. The theaters were nearly identical, with the curved auditorium inside being expressed on the outside as a robust, drum-like form. Sadly, all three have been torn down — the one in Denver to make room for a Barnes & Noble parking lot. (To see photos of all three Crowther theaters, go to cinematreasures.org.)

I've been lucky enough to visit a couple of Crowther houses — one in Cherry Creek North and the other in Greenwood Village — and believe me when I say that both were drop-dead chic. I've never been inside one of Crowther's greatest masterpieces, the 1979 home and studio he designed for himself and his wife that sits on the northwest corner of Fourth Avenue and Madison Street. The house was a laboratory for the working out of Crowther's environmental theories. The elaborate forms of the place include a lively constructivist rhythm of rectilinear blocks set off by a wedge-shaped roofline with an integral canopy shielding a row of solar panels. Separated by flat roofs is another wedge and a long barrel vault. The severe-looking painted concrete structure is definitely one of the coolest residences from any date in Colorado, right up there in the top tier with Charles Deaton's Sculptured House in Genesee.

Crowther, who was a Fellow of the American Institute of Architects, donated his plans, documents and drawings to the Western History Department of the Denver Public Library. Crowther died on Christmas Day, 2006, at the age of 96, capping off a lifetime well spent in the single-minded pursuit of his art and science.
KEEP WESTWORD FREE... Since we started Westword, it has been defined as the free, independent voice of Denver, and we'd like to keep it that way. With local media under siege, it's more important than ever for us to rally support behind funding our local journalism. You can help by participating in our "I Support" program, allowing us to keep offering readers access to our incisive coverage of local news, food and culture with no paywalls.
Make a one-time donation today for as little as $1.