Destiny Acuna spotted at the Gothic Theatre. Photo by Mauricio Rocha
Sometimes the stars align to create an exchange of energies between the famous and the up-and-coming. Such is the case with fashion designer Destiny Acuna, who managed to get her creations to the first lady of top Dawg Entertainment, SZA, a five-time Grammy-nominated R&B singer. SZA played the Gothic last fall on her CTRL tour, named after her critically acclaimed album. At the show, we spotted Acuna's distressed-denim look, hand-crafted with customized patches, made especially for SZA. We chatted with the creative seamstress about her work and how she got it to the star. 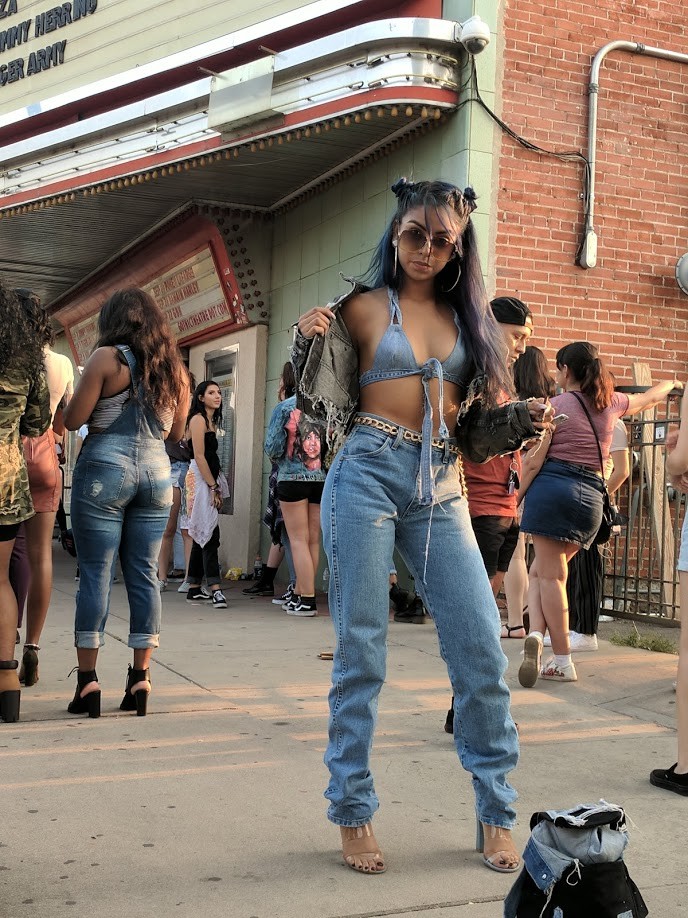 Photo by Mauricio Rocha
Westword: How do you feel about SZA?

Destiny Acuna: After listening to SZA for the past five years, I bought a meet-and-greet. Once I bought my ticket, ideas were pouring, so I began to sketch a customizable jean jacket for her. I pulled SZA's personal sketches she used on her album booklet and website, and painted them all onto a white canvas fabric. I patched the jacket with doodles and CTRL in scraps of denim. I cut the jacket in half, added distress, yet I still didn't feel complete on only giving her one piece. The night before the concert, I made her a laced denim tube top and distressed jeans, along with a bra for me to wear. SZA is super-humble and enlightening...we exchanged information, and she decided to wear my items on stage that night and throughout the rest of her tour. The jeans were spotted in L.A. and Oregon, while the jacket was worn in Las Vegas and L.A. I still get a high thinking about the situation. She adored the bra I was wearing, so I know this is barely the beginning of a relationship.

Where are you from originally?

I was born in Los Angeles, California, but I've been living in Denver for the past twelve years. 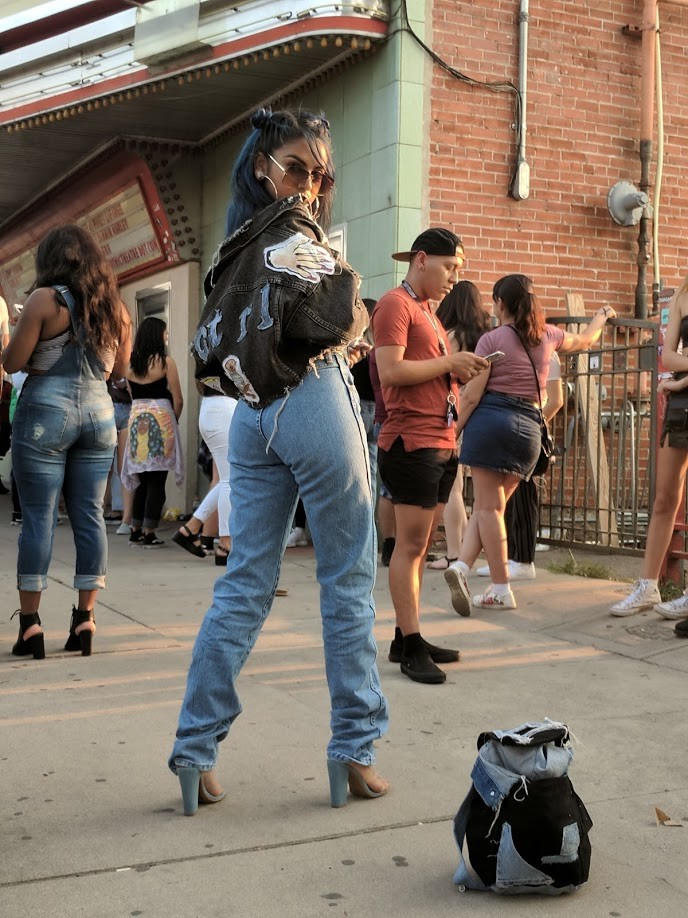 Photo by Mauricio Rocha
Who or what inspires your style and fashion?

I've been inspired by early pop stars, street wear, Bratz dolls, high-end designers, ’90s-2000s pop stars such as Aaliyah, Destiny's Child, Spice Girls, J-Lo, etc., street wear ranging from the ’80s to the mid-’00s. Working at Station has introduced and exposed me to the depth of street wear. Playing with Bratz dolls throughout my childhood definitely had an impact on me, always changing their clothes. Honestly, inspiration varies from everyday people — since I'm always on the go — to high-end fashion designers such as Rick Owens, Alexander Wang, Raf Simons, head designers of Louis Vuitton and Coco Chanel.

How long have you been designing clothes and sewing?

Seven years on sketching and designing. My first pieces go around sewing, while still reconstructing the piece. I learned how to sew my junior year of high school, and it's insane to think I've been perfecting my craft the entire time. However, I'm barely getting into the ideas and looks I'm going to execute. Photo by Mauricio Rocha
How did you learn to sew?

I actually taught myself; my mom bought me a sewing machine. I attempted a few projects; however, I realized I needed to lock down basics, so I enrolled in a class my junior year. I literally had the worst teacher, speaking to me as if I was five, who would threaten to kick me out her class, so we never got along. I ended up telling her to stop talking to me; if I had any questions or problems I couldn't figure out, I'd go to her. Learning from classmates, I got what I wanted and passed. After a year and a half, I was repeating senior year due to moving for the fourth time and came to the realization that I need to advance my skills and take it to another level. I attended Career Education Center for its sewing class while being enrolled at Emily Griffith High School. I adored Mrs. McMann and Mrs. Nancy at CEC, who would contribute to my ideas, teach me proper techniques and even gave me an old Singer sewing machine, recognizing my passion for the class.

What is your jam of the moment?

Can't get away from the CTRL album by SZA, but Jhene Aiko's Trip album has been very addictive as well. It's super-rejuvenating along with being in love with the moment. 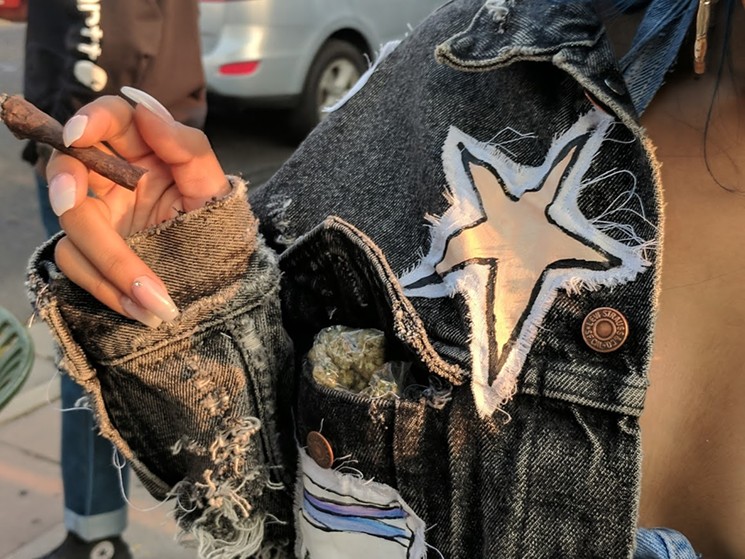 Photo by Mauricio Rocha
What is your favorite film?

I'm not a big movie girl, but I'll be happy if you put on Clueless, Baby Boy, 10 Things I Hate About You, The Wolf of Wall Street, Boyz N the Hood, Kids, Beetlejuice, Wonder Women and Great Gatsby. I'm a mixture of it all. While watching the film, most of my attention is on wardrobe...so no scary movies, please, thanks.

What is your favorite color?

Blue. It represents enlightenment and happiness to me. I love each value, tint and shade of it. The way Barbie loves the color pink, one can imagine me a Bratz doll decked in blue. A belt from my mom's closet or the thrift store. Preferably a gold or silver one with charms or a bold buckle. A belt ties into the hoops and other accessories I'm wearing and really captures the attention of the waist. Or my jean jacket that's cropped in half and super-worn with small amounts of distress. Perfect to throw on when looking to complete a look.

It's a versatile textile with several personalities for every individual, and I like to challenge it. Corny to say, but I didn't choose denim, it chose me — and it gave me recognition on what I love to do. Seven years of thrifting pants to make shorts and I've mastered the perfect distress, while using the scraps to reconstruct into tops, bras and add onto other jeans. Denim holds a bold statement and will never go out of style.

Destiny Acuna's bag is stenciled with "Station," the name of the street-wear boutique where she works.
Photo by Mauricio Rocha
Where do you shop?

I get my clothes from three places: Goodwill, Station, or I make it. Goodwill definitely makes up 75 percent of my three closets, and let me tell you I hit the jackpot every time I walk into a thrift store. The way I shop is visualizing an outfit with the piece, and I usually buy everything. But, come on, with that price you can't really complain. I also shop at Station for the hottest vintage and street wear. Since I actually work there, I get first dibs on pieces because things come and go so quickly: Come visit me and check it out! If I'm still missing a piece to complete my outfit or spark an idea on what to wear, it results in me cutting and sewing all night in my room until it's complete.

What is your style mantra, something you say to yourself while getting dressed?

SZA wearing a jacket made by Destiny Acuna.
Photo courtesy of Destiny Acuna
Is there anything you'd like to add?

Just to simply commit yourself to doing something you absolutely love, and as long as you have the intrinsic motivation, consistency and effort to follow through, life becomes limitless. Effort is recognized as a signature, and the support system is larger than one can imagine. Take a risk and put your creations out there; the reactions are priceless. Remember, you're not prospering if you're not uncomfortable. Acuna's fashion designs made for SZA, before she gave them to her at a concert in Denver.
Photo courtesy of Destiny Acuna
Don't miss Acuna's personal Instagram page and her Instagram page dedicated to her favorite textile, Destiny's Denim. Acuna will host her own pop-up shop at Station this year; check the store's website for updates.

Mauricio Octavio Rocha graduated from Metropolitan State University of Denver in 2014 with a bachelor's degree in English writing and a minor in cinema studies; He has been writing about fashion and style for Westword since 2012. Rocha also writes songs for his music and art project, VULGAR FEVER.
Contact: Mauricio Rocha
Follow:
Facebook: Mauricio Rocha
Twitter: @mauriciooctavio