Lexie Bader will walk the runway at Fashion West. Randi Rheaa
When model Lexie Bader walks down the runway, not only is she tall, beautiful, graceful and commanding — she also looks like some sort of futuristic bionic woman. And she owns it.

“The running blades are badass,” she says of her prosthetic limbs. “I wish I could wear them all the time, but they aren’t made for that. When I do, people always come up to me and tell me they look so cool.”

Bader lost both her legs as the result of a nerve disorder she contracted after shattering her left ankle in a snowboarding accident in 2012 at the age of sixteen. The condition is called complex regional pain syndrome (CRPS), a form of chronic pain that usually affects an arm or a leg and can develop after a trauma to the body, such as an injury, surgery or a heart attack. For Bader, it started after years of surgery trying to mend her broken ankle. In 2019, she’d had enough.

“I went snowboarding, and it was just so painful. It felt like someone was driving over my foot with a car. I had to stop doing everything. I couldn’t even walk normally,” she says. “I was told I’d live in chronic pain for the rest of my life.” For people living with CRPS, amputation of the affected area can often relieve the pain, but there’s a catch. Since the surgery is yet another trauma to the body, CRPS can spread to other limbs.


The Boulder model, who started hitting the runway in 2011 at the age of fifteen, says she found some solace in seeing other amputees online who were still living very active lifestyles. “I just thought, I’m already facing pain for life. Why not take the risk to live with no pain? If it spreads, I’ll know at least I tried to live a better life than just giving up.”

She made the decision to amputate her left leg in June 2019. For a while, things seemed to be going well. Her leg was healing, and she was able to get back to doing activities she loved. But then, in early 2020, the pain returned, this time in her other leg. “I was told it’s super rare for my nerve condition to spread. But it did. And it was worse on the other side.”

She made the tough decision to remove her right leg in January 2021. Six months later, she made her modeling debut at Denver Fashion Week as a double amputee using running-blade prosthetic lower limbs. “It felt so good to walk again,” she exclaims, adding that she didn’t expect to be cast for any of the shows. She ended up being asked to walk for designers on all three nights. “I started hearing from designers that they wanted me to walk for them, but someone else had beat them to it.” 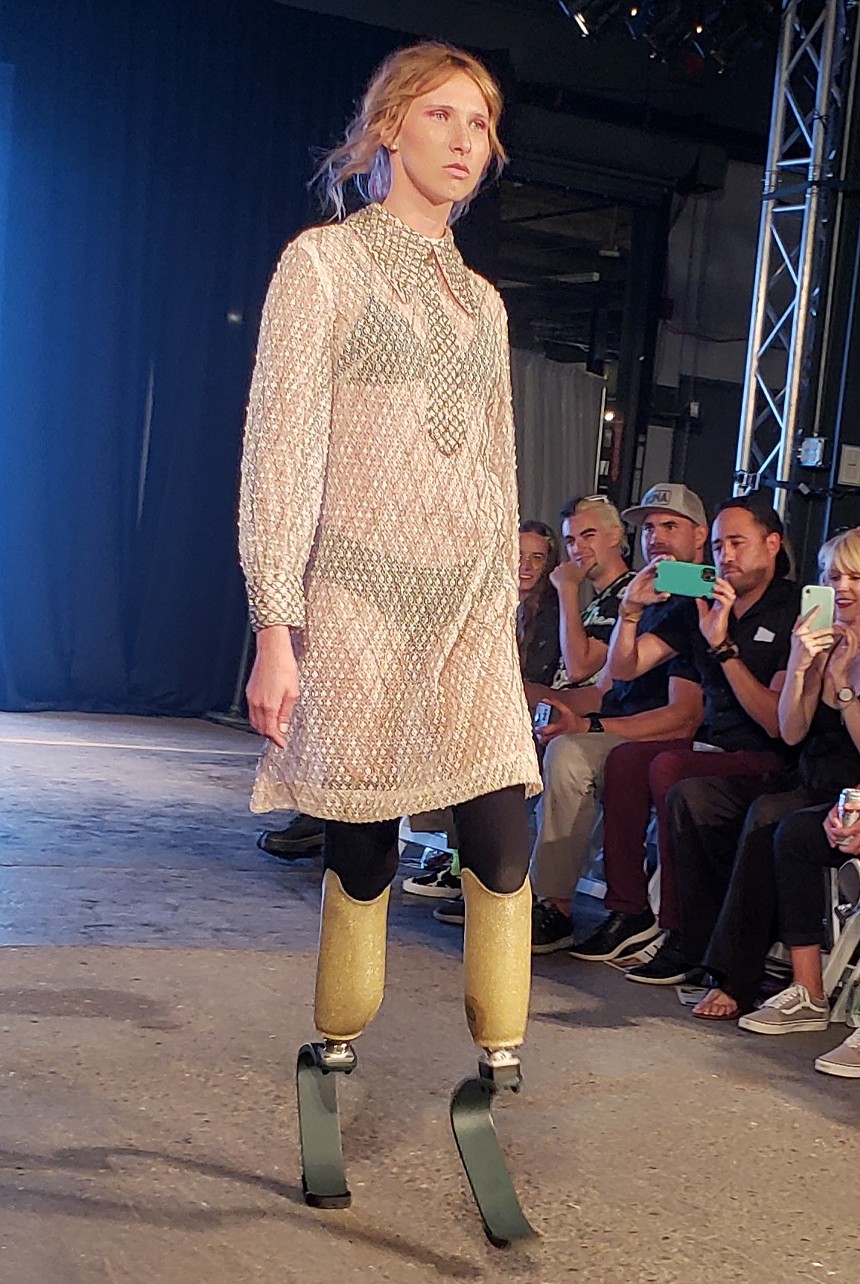 Lexie Bader walks the runway at Denver Fashion Week
Kastle Waserman
The model is currently looking forward to participating in the upcoming Fashion West show on August 16. “I’m just so happy that I’m actually able to do something,” she says excitedly.

As a new amputee, Bader is finding her place as a model who represents people with disabilities. She says she feels lucky to be in Colorado because it feels more accepting of people who are different. “Things are opening up for models,” she says, “They look for all sizes and abilities. I want to help others feel like they’re not alone.”

She says she hopes representing people with disabilities will offset the stereotypical image of a model. “I want people to see me as just another person. When I go to castings, I don’t want designers to pick me because they feel bad for me. I want them to pick me because I’m a good model and they like my look. I also want to get picked because I’m not perfect, and to show we don’t need to be perfect to be beautiful.”

Her experience is also helping to teach others how people live with disabilities. “As someone who wasn’t born disabled but became disabled, I see people’s reactions. People baby us like they feel sorry for us,” she explains. “I ask the people who’ve seen me crawling around or trying to get into a bed or use the bathroom if it’s changed their perspective. They always say yes. They just have more understanding,” she says.

Lexie Bader
Randi Rheaa
Bader says the response isn’t all sunshine and positivity. When she launched a GoFundMe page to help pay for medical expenses, Internet trolls came out with accusations and judgments.

“People can be so ignorant and rude,” she explains, “There were people saying, ‘You didn’t have to amputate your legs; you just did it so people feel bad for you.’ Who would want to lose their legs to fit in?” she recalls, exasperated. Another response she didn’t expect was people with disability fetishes who now contact her on Instagram. “It’s creepy. I have to block people every day.”

She says for the future, she hopes to land an ad campaign with Target. “They feature so many people with disabilities. I want to show that you don’t have to be this skinny, tall, perfect person to be a model.”

She also hopes to travel and eventually sign an international modeling deal.

“I don’t want people to think being disabled means you can’t do anything,” she says. “People with disabilities are doing all kinds of things. They’re wakeboarding. They’re mountain biking. It’s a disability because we’re different and life is harder, but I don’t feel disabled. I’m still very capable.”

Lexie Bader will walk the runway at Fashion West, from 5 to 11 p.m., Monday, August 16, at ReelWorks (formerly Exdo Event Center), 1399 35th Street. Tickets are $30 to $75 and available at Fashion West. Vaccination proof or a COVID-19 negative test will be required. Rapid testing will be available on site.

Correction: An earlier version of this story misattributed photographs by Randi Rheaa to the wrong photographer. We regret the error.
KEEP WESTWORD FREE... Since we started Westword, it has been defined as the free, independent voice of Denver, and we'd like to keep it that way. With local media under siege, it's more important than ever for us to rally support behind funding our local journalism. You can help by participating in our "I Support" program, allowing us to keep offering readers access to our incisive coverage of local news, food and culture with no paywalls.
Make a one-time donation today for as little as $1.