That was all part of Erin Barnes's teen years in the white-picket-fence world of Fort Collins, which she chronicles in her latest book, Glory Guitars: Memoir of a ’90s Teenage Punk Rock Grrrl. Barnes is the communications manager at Meow Wolf's Convergence Station, but she's been leaning into her alter ego, Gogo Germaine, as the book's October 11 release date through University of Hell Press approaches. She decided to use the Gogo Germaine byline in order to not conflate her career and life as a mom with the PBR-swilling, headbanging, rebellious grrrl with punk-rock proclivities and two middle fingers thrust at societal expectations.

Those middle fingers are still in the air, at least a little. "I first sat down to write Glory Guitars in October of 2018. I just remember being so burdened with responsibility. I was a new mom, and I had to work a lot just to survive in this society, especially as a creative, so I had, like, eight jobs," Barnes recalls. "It was an escapist thing to think about: The idea of running through a field, ditching class as a teenager with very little responsibility, was just so magnetic to me." 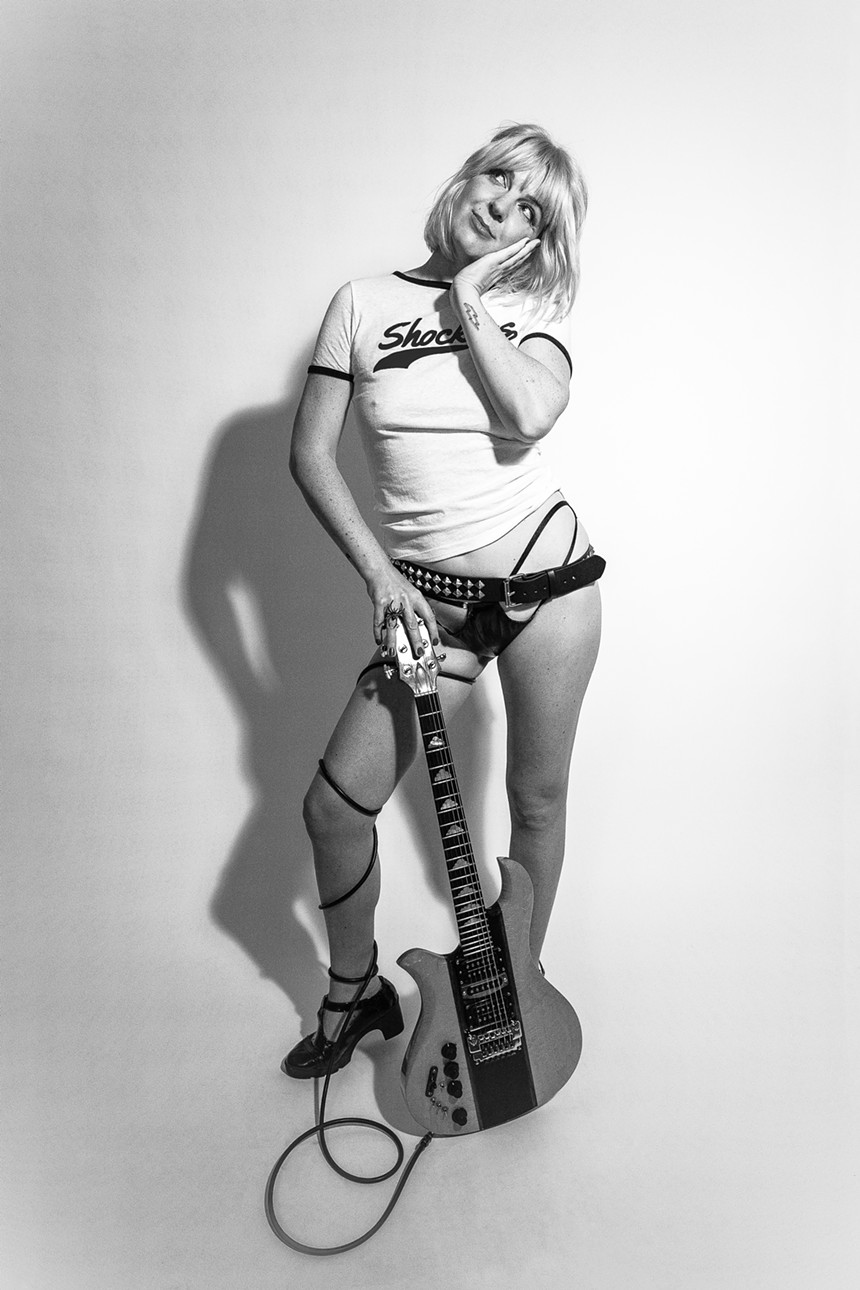 Erin Barnes has a book reading and signing at the Tattered Cover on October 11.
Glenn Ross
She wrote the book in a matter of weeks during a residency at The Music District in Fort Collins, where she met with her old crew to see what they remembered of their debauched antics. "I hung out with all of the girls that are in the girl gang," she says. "I hung out with, like, my first boyfriend, Johnny Gutpunch. I would just reminisce with them, ask them about their memories and talk to them about my memories. If they just totally didn't remember it, I wouldn't put it in the book.

"Most people don't know what it feels like to rob a bank because their morals stop them from doing that," she continues. "But as a teenager, you can kind of explore the boundaries of creating situations that are almost movie-like. When we ditched school, it felt like a movie, and it felt like we were getting away with something big, like we were robbing a bank."

The stifling atmosphere of Fort Collins was the impetus for her girl gang's plucky, defiant nature. In a chapter about skipping class, Barnes writes: "Your 15-year-old self might say you don't need to explain what's cool about ditching class, playing the drums, or subsisting on a diet of coffee, cigarettes, malt liquor, Lester Bangs, and smashy guitars. It's a natural predilection. The only reason people assume it's indicative of emotional trauma is because you're expected to like pink and cheerleading. The truth is that some people are happiest wearing black and listening to fucked-up music, and you're one of those people. It doesn't necessarily indicate a deeper emotional trauma, it's simply the tendency to dig deeper and burn harder."

Gogo Germaine and a friend, wild and free.
Erin Barnes
And she burned hard. Barnes and her skater-girl gang did their best to escape the boredom that thrives in suburban sprawls. "By age fifteen, we had discovered an intricate infrastructure of debauchery across Fort Collins," she writes. "Our entire network of punks and degenerates knew its secrets. We knew which liquor stores sold to minors: the cramped chunk of cement on Riverside Drive with a view of the train tracks; the more wholesome, suburban wine shop where parents might shop, yet they surprisingly didn’t ID. We knew which cafes would let underage people smoke inside: Max’s Subsonic — an old house turned café with rooms to get lost in that threw actual parties for underage kids — plus late nights at IHOP, and within the dingy, red-painted walls of Paris on the Poudre, the goth cafe. While I’m glad for the health of today’s youth, I almost feel bad they won’t ever experience the dirtbag tang of indoor smoking."

Barnes has grown up a lot, of course, and has insights into her teen rebellion. "Some people just have to be subversive in life," she says. But some things remain the same: While she appreciates Fort Collins more as an adult, she says, "that sort of American neighborhood has always felt hostile to me. You know if you don't have your lawn perfect and there's HOA? Yeah. I hate all that."

Barnes has synesthesia — a phenomenon in which people associate certain senses with others, such as seeing colors upon reading words or hearing music. (She's in good company: Many writers, including the great Vladimir Nabokov, have been synesthetes.) That's reflected in the soundtrack she suggests at each chapter break to supplement the events she's describing. She's lyrical and imaginative, homing in on intricate details and making them blossom like flowers — even when the topic is her best friend's illuminated breasts while she's stripping on a pole at a local club. Her style brings a delicacy to torrid darkness, from rape to blowing cocaine in junior high, to her friend being unwittingly dosed with 100 hits of LSD while sleeping.

Those situations were the most difficult to write about. "I realized that I was editing out the hard parts; it was just this really fun party book," she says. "So I was kind of forced to reckon with, 'Okay, there were really dark things that happened.' One of the reviews that came out...compared it to Kids and 13. And when I wrote it, I didn't mean to at the time, but I was like, 'Yeah, this reminds me of Kids a little bit.'"

As for whether Barnes still considers herself a punk, she pauses. "I believe that punk is an ethos," she says. "I'm into the ethos of punk — I'm not into wearing a punk uniform or those people in the scene who make it exclusive, with the 'Name three songs' question, where you have to know everything about these exact bands or you're not punk. That's just more gatekeeping; I don't like that. I just believe that punk is an ethos of being countercultural and being authentic, of challenging arbitrary authority. And so in that regard, yes, I definitely feel punk."

Barnes will be returning to Denver from her book launch in New York for a book reading and signing at 6 p.m. Tuesday, October 11, at the Tattered Cover at 2526 East Colfax Avenue. 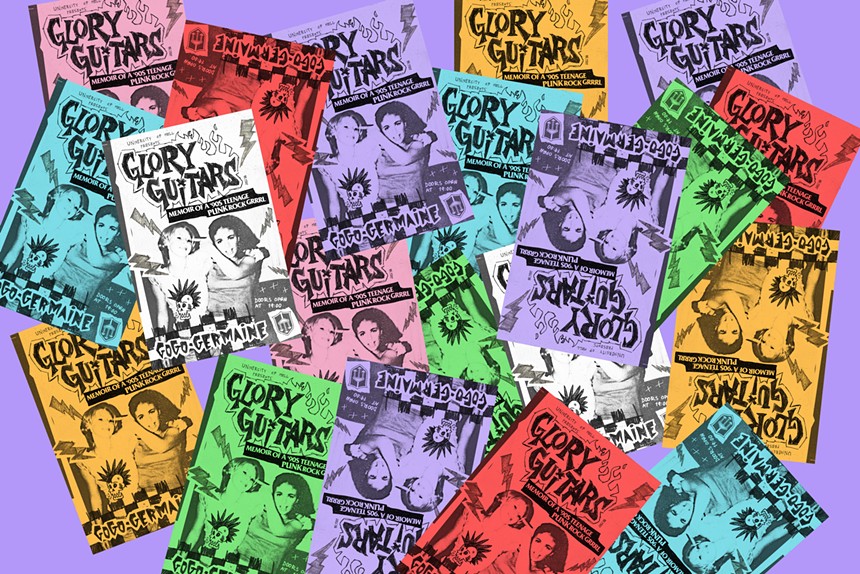 Let me tell you a story that will confuse your senses of what’s right. It begins with an epic band that plays music to rob banks to, music that’s naturally playing on some spiritual plane during each and every knife fight. This music is both campy and classic, yet there’s a vein of frenetic, full-throttled machismo; not the red-blooded machismo of Bruce nor aspirational douche machismo of Bono. It’s foundational guitar music, darkly romantic from times past.

We’ll call them the Flames. For reasons that you’ll understand soon, that may be rooted in Stockholm Syndrome, I’m keeping them anonymous.

Corinne and I enjoyed our dark proclivities. Where other girls our age went to *NSYNC concerts, Corinne and I could be found at Type O Negative concerts. We were bewitched by Peter Steele's subterranean voice and wine-swigging black romance, wind machines re-animating his long hair and goth metal bass riffs ravaging our nethers. We waited in the alley after the show among the heavily pleathered and begothed, meek souls lining up to be vampirically fucked by Peter. He waved at us with the passion of someone seeing a corporate coworker at a social event, then ducked into his tour bus. We weren’t aware that he was known as a misogynist and a domestic abuser, and even considered a Nazi sympathizer in some circles. His tendency to alternately worship women (“I am your servant, may I light your cigarette?”) and threaten to annihilate them in the same song ("let me love you to death….the beast inside of me is gonna get ya") was narcotic to our Baroque teenage passions.

The back-alley meeting with Peter was our standalone attempt at groupiedom. It took a lot of sex appeal on the part of the performer to convince us to put ourselves out there as groupies. This type of self-offering required more appearance-based confidence, and less innards-based confidence, than I had. ...

“Groupie” has always been a term I wanted to distance myself from. I worked in the music industry for over a decade, a music industry filled with musicians who are unarguably the sexiest people on earth. During that time, I never so much as touched a single one of their guitar-strumming muscled arms or errant, perfectly messy hairs on their heartbreaking beauty-filled heads. ...

Watching the Flames at the Starlite on a Saturday night, during a particularly life-altering show, I was blissfully 15 years old and had no career to be insufferable about.

Immediately after the show, while the crowd still cheered, the bass player of the Flames emerged from backstage. He had purple hair and looked like an aging punk. He grabbed my hand and pulled me backstage like a rag doll, pausing to ask, “How old are you?”

“Eighteen,” I immediately answered. A silent agreement. An answer that’s compliant and rebellious at the same time. He nodded, and we went backstage, my hand pulling Corinne along with me.

Thus began a deviant, occasional courtship that spanned three years between me, a 15-year-old girl, and Ezra, a 50-something rock star.

Glory Guitars reading and signing, 6 p.m. Tuesday, October 11, Tattered Cover, 2526 East Colfax Avenue, tatteredcover.com.
KEEP WESTWORD FREE... Since we started Westword, it has been defined as the free, independent voice of Denver, and we'd like to keep it that way. With local media under siege, it's more important than ever for us to rally support behind funding our local journalism. You can help by participating in our "I Support" program, allowing us to keep offering readers access to our incisive coverage of local news, food and culture with no paywalls.
Make a one-time donation today for as little as $1.
Emily Ferguson is Westword's Culture Editor, covering Denver's flourishing arts and music scene. Before landing this position, she worked as an editor at local and national political publications and held some odd jobs suited to her odd personality, including selling grilled cheese sandwiches at music festivals and performing with fire. Emily also writes on the arts for the Wall Street Journal and is an oil painter in her free time.
Contact: Emily Ferguson