Everything You Need to Know About FAN EXPO This Weekend Captain America salutes FAN EXPO Denver Youtube
Welcome to the new era of comic and pop-culture conventions in Colorado. If you were there for the first Denver Comic Con, you probably remember when it became Pop Culture Con for a bit. And if you’re reading this article, chances are you at least heard about the fun-sized debut FAN EXPO Denver Special Edition last October. This weekend, from July 1 to July 3 at the Colorado Convention Center, we get the first full-scale summer FAN EXPO Denver convention, which the organizers and fans from across Rocky Mountain West hope will become a tradition.

The history of the convention is fraught with fits and starts, but also a lot of heart from organizers over the years. The first convention was held in June 2012 and drew over 25,000 attendees. The annual event rocketed up in size from there, cresting the 100,000 mark only three years later, marking the event as one of the largest of its kind in the United States. With each year, the event grew even more, gaining a national reputation. And by the 2018 conference, it had become an annual tradition for lots of Colorado fans and families alike. 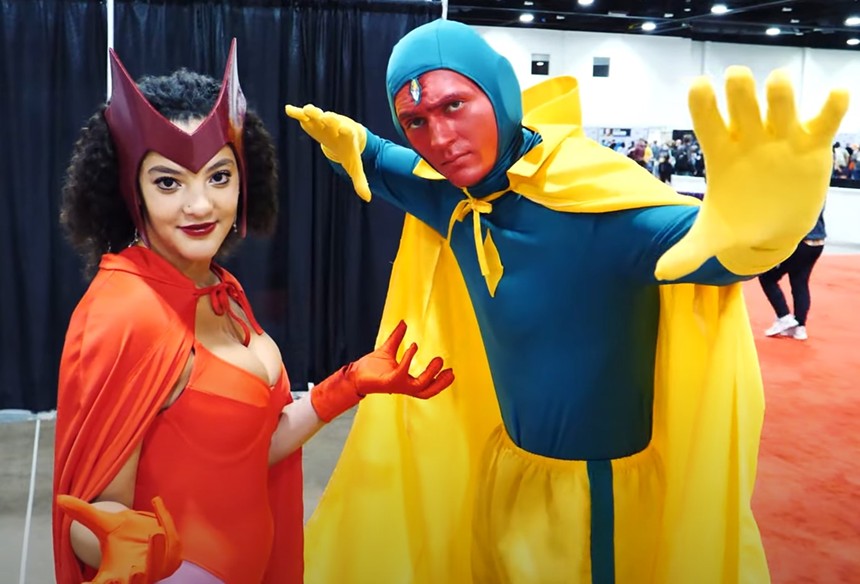 Scarlet Witch and Vision.
Youtube
It was in 2019 that the first name change came about, after the juggernaut San Diego Comic Con successfully trademarked the term “Comic Con.” SDCC won a landmark case against the Salt Lake City Comic Con for breach of trademark, and even won reimbursement of attorney’s fees. That judgment put a scare into every event nationally that was using the moniker, including Denver’s. Its response was to utilize Pop Culture Classroom — organizationally and foundationally involved with the convention from the very beginning — as part of the new name. And so Denver Pop Culture Con was born.

That name would only apply for a single year. The 2020 and 2021 events were canceled because of both the pandemic and financial issues. Then, in 2021, FAN EXPO HQ acquired the convention with an agreement to keep Pop Culture Classroom as an important part of the event, both as a showcased charity and as a provider of kid-focused educational programming. 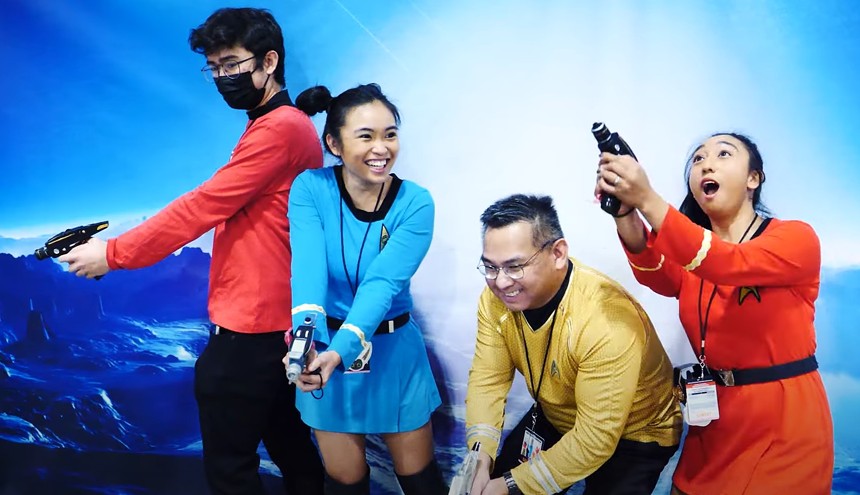 Landing party on the surface of Colorado.
YouTube
Last year’s FAN EXPO Denver was something of a preview — smaller floor space, fewer vendors and exhibitors, a smaller slate of special guests. But it was still a success, drawing in the nerdily minded from all over Colorado and surrounding states to celebrate their geeky passions. But FAN EXPO HQ promises this year will be bigger and better.

The process of putting on FAN EXPO Denver 2022 hasn’t been without controversy. The announcement that controversial actress Gina Carano would be a special guest complicated the plans of some potential patrons, who didn’t like the extreme political and social opinions she’d posted to social media — the same opinions that got her fired from her breakout role in The Mandalorian. Some fans promised not to attend FAN EXPO Denver at all out of protest; others supported Carano’s right to make an ass out of herself. FAN EXPO HQ refused to comment. 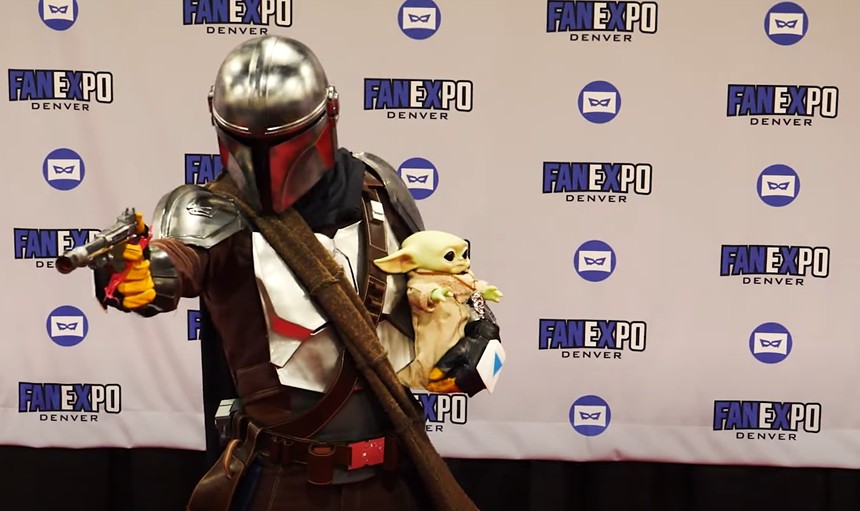 The Mandalorian and Grogu.
Youtube
Fortunately for those fans still attending, Carano is far from the only special guest who’ll be there, ready to smile and pose for a selfie and sign a head shot — for a fee, of course. But it’s a cost fans are clearly willing to pay, based on the lines from previous years. Special guest highlights this year include the Lord of the Rings hobbits (Elijah Wood, Sean Astin, Dominic Monaghan and Billy Boyd); a spectacular set of Star Wars stars (Anthony Daniels, Ming-Na Wen, Katee Sackhoff); the main players from the View Askewniverse (Kevin Smith, Jason Mewes, Brian O’Halloran), and stars from both ’80s movie throwbacks including The Goonies and Karate Kid and recent TV shows such as Legends of Tomorrow and Sons of Anarchy. A complete rundown of the guests and their scheduled appearances is available on the FAN EXPO Denver website.

And those are only the TV and film celebrities — this was born, after all, as a comic convention. The headliner in that category is legendary artist/creator Jim Lee, who’ll be joined by Ryan Ottley, Leinil Francis Yu, Brian Azzarello, Simon Bisley, Michael Golden, Howard Mackie, David Mack and too many others to list. That lineup, with days of appearance, is also available online.

Three-day and VIP passes to FAN EXPO Denver are already sold out, as are youth (ages 13-17) tickets for Saturday and Sunday, and Family Tickets for Saturday. Single-day passes are still available for Friday ($47), Saturday ($62) and Sunday ($52). To purchase tickets, or for more information on availability, see the FAN EXPO ticketing page.

Fan favorites also include the floor full of vendors, artists, writers, exhibitions, panels, workshops, the traditional Kid Zone, and more creative cosplay than your smartphone will be able to capture in three days of nerdalicious fun.

It’s been a good ten-year run: Here’s to another geek-joy decade, right here in Denver.

FAN EXPO Denver, July 1-3, Colorado Convention Center, 700 14th Street. For tickets and more information on events, see the FAN EXPO Denver website.
KEEP WESTWORD FREE... Since we started Westword, it has been defined as the free, independent voice of Denver, and we'd like to keep it that way. With local media under siege, it's more important than ever for us to rally support behind funding our local journalism. You can help by participating in our "I Support" program, allowing us to keep offering readers access to our incisive coverage of local news, food and culture with no paywalls.
Make a one-time donation today for as little as $1.