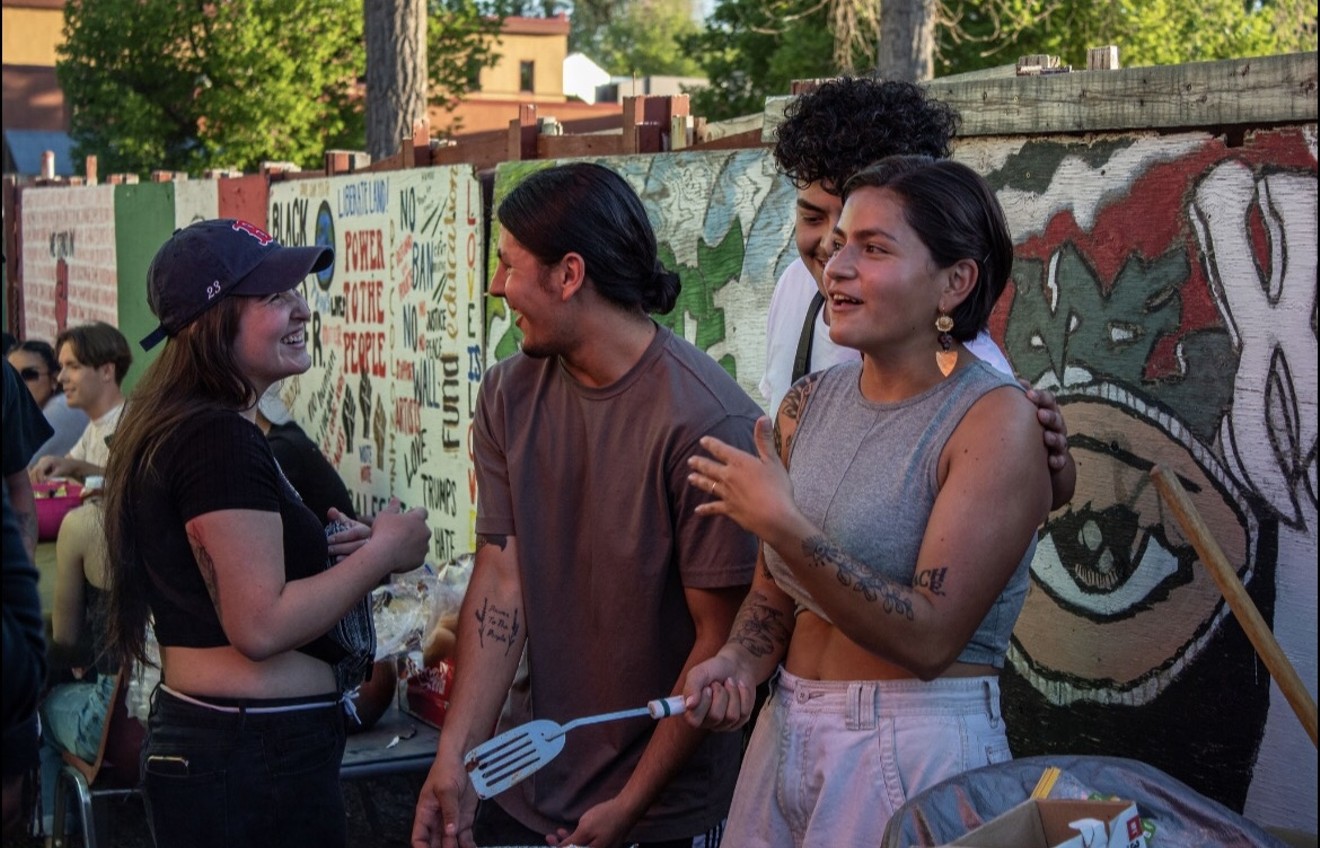 CAW was organized by Enrique Benavidez, UNC's first student body president majoring in Chicano Studies, who has a passion for helping his community. “I was raised to be that way by my grandparents," he says. "They adopted me when I was younger because my parents were in and out of prison, and so I got that aspect of always trying to do stuff for those around me."

Benavidez hopes that the celebration will reach a wide variety of people, from local high school and college students to community members. “Right now we're facing a lot of problems regarding students not feeling welcome and safe due to there being a low amount of faculty and staff of color," he notes.

He aims for the events to capture the culture and create a diverse, inclusive space for all. Benavidez also understands the struggles that low-income students go through, so every event is free.

Enrique Benavidez received an award alongside the Chicano Studies Department.
Enrique Benavidez
Through CAW, Benavidez hopes to engage minoritized high school students to be excited about college. He hopes to create a pathway from the local high schools into local colleges to assure students that they are heard and that higher education is attainable. Graduating from high school with a 1.9 GPA, Benavidez did not feel like college was an option. Despite that obstacle, he was able to enroll in community college and transfer to UNC with the help of many key influences in his life.

“I felt inspired to be the change and do something for our [Chicano] community, because no one at this campus was,” says Benavidez.

CAW is a fun-filled week that you do not want to miss. See the full schedule below:

Poetry Slam headlined by Alejandro Jimenez
Tuesday, April 19, 6 to 8:30 p.m.
Lindou Auditorium
1400 22nd Street, Greeley
Organizer Benavidez started planning this event last summer, and reached out to several luminaries to join in. One of them is Alejandro Jimenez, an accomplished local performance poet from Colima, Mexico. Understanding the power of words, Jimenez impacts many with his poetic performances, which share his experiences as an immigrant and Indigenous man. UNC invites students and members of the community to unite through poetics and have their voices heard. The first twenty students get a free signed copy of Jimenez’s book, Moreno. Prieto. Brown.

Symbols of Resistance Film Screening
Thursday, April 21, 7 p.m.
Lindou Auditorium
1400 22nd Street, Greeley
Prepare your popcorn for Thursday for the film screening of Symbols of Resistance, a powerful film highlighting the untold stories of the Chicano movement. Be ready to immerse yourself in a new world of culture.

Community Car Show
Friday, April 22, 5 to 8 p.m.
César Chávez Cultural Center
1410 20th Street, Greeley
Friday will bring the community together through a car show pop-up that celebrates a part of Chicano culture along with other car enthusiasts. All makes and models are welcome. Entry is free to the public.

Chicano Awareness Week Spring Concert
Saturday, April 23, 7 to 9 p.m.
Bank of Colorado Arena
270 Alles Drive D, Greeley
UNC ends the week with a bang on Saturday, with a concert that includes well-known artists such as Baby Bash, MC Magic, Lil Rob and Jay Roxxx. Enjoy an infusion of sounds while immersing yourself in the musical aspects of Chicano culture. Whether you are new to this genre of music or not, this is a don't-miss event. Tickets are free and selling out fast!

To learn more about Chicano Awareness Week, visit UNC's calendar.
KEEP WESTWORD FREE... Since we started Westword, it has been defined as the free, independent voice of Denver, and we'd like to keep it that way. With local media under siege, it's more important than ever for us to rally support behind funding our local journalism. You can help by participating in our "I Support" program, allowing us to keep offering readers access to our incisive coverage of local news, food and culture with no paywalls.
Make a one-time donation today for as little as $1.