Nine Arty Things to Do and See This Weekend 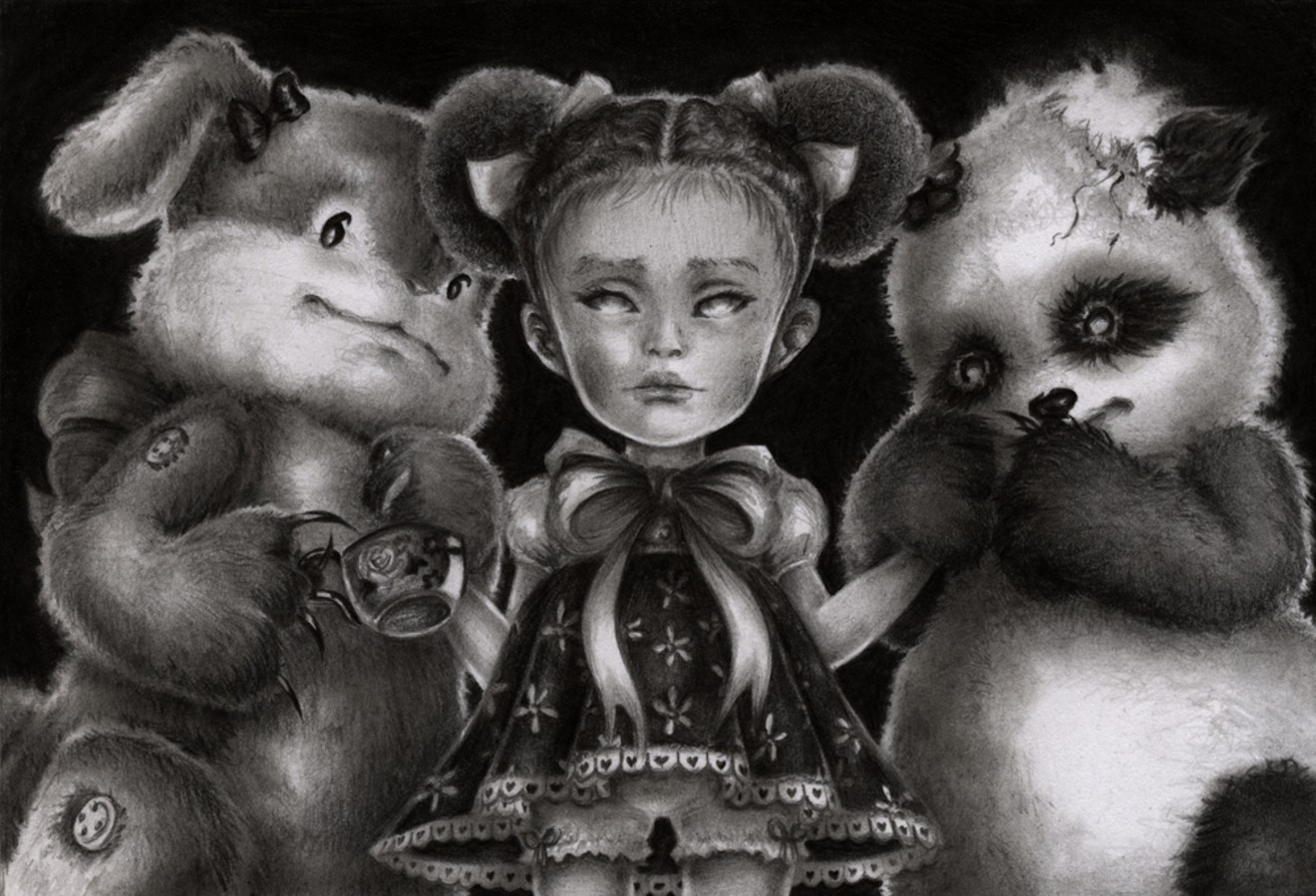 PeeMonster, "Keep Your Friends Close." PeeMonster, Sally Centigrade
Get in line: The April onslaught of new gallery shows and events isn’t over yet. Catch on to the Denver art scene’s continuing reverberations at these nine hot spots.

Drew Landon Harris, "The Fox’s Forest."
Drew Landon Harris
Drew Landon Harris, Inspiration/Perception
Globeville Riverfront Arts Center, 888 East 50th Avenue
Opening reception: Thursday, April 12, 6 to 10 p.m.
The GRACe studio enclave opens up to the public this week for a solo show by resident artist Drew Landon Harris, who will be showing work from two series: The Golden Figures, with its black and gilded portraits, and The Space Between, mixed-media constructions that play with iconic shapes and light on unorthodox geometric surfaces. Arrive early and you might luck out: Harris will be handing out free prints to the first few early birds in the door.

PeeMonster, "Gabreal."
PeeMonster, Sally Centigrade
Heart Therapy: PeeMonster Solo Show
Sally Centigrade, 445 South Saulsbury Street, Lakewood
April 12 through May 5
Opening reception: Thursday, April 12, 5 to 9:30 p.m.
Though it’s hard to believe, lowbrow champion Scott Bailey of Sally Centigrade says Heart Therapy is the first true solo show the gallery’s ever hosted since its first local iteration opened in Larimer Square in 2014. He also can’t hide his excitement over the exhibit, which features work by the Bay Area artist known as PeeMonster, who creates sought-after naive portraits in graphite and charcoal. PeeMonster might or might not be present at the reception, but there will be plenty of his signature artwork to view.

Mark Fitzsimmons, under the weight of his military service.
Photo by Ted Heron
Mark Fitzsimmons: Identification Please (Flag Piece)
RMCAD Spring 2018 Graduation Exhibition
Rocky Mountain College of Art + Design, 1600 Pierce Street, Lakewood
Opening reception: Friday, April 13, 5 to 9 p.m.
While the Rocky Mountain College of Art + Design’s 2018 graduating class celebrates its graduation exhibition with a reception in RMCAD’s Philip J. Steele Gallery on April 13, fellow grad and war veteran Mark Fitzsimmons will be finishing his culminating work on metro-Denver streets. For Identification Please (Flag Piece), Fitzsimmons plans to work through the emotional weight he still carries from his time in the military in a physical performance, by walking nine miles through the city, carrying a weighted American flag. His walk, which begins at 1 p.m. at Curtis Park, 31st and Champa streets, is scheduled to end around 6:30 p.m. at the gallery, where he’ll join the celebration. Viewers are asked not to join him on his trek, but feel free to meet up at either end of the hike, or in the middle, at Civic Center Park. To follow Fitzsimmons online, send him a “find my friends” and request “the day of.” Select “share till the end of the day.” Fitzsimmons also hopes to stream live video on his Facebook page.

Friday the Thirteenth trinkets at RiNo Made.
RiNo Made
Friday the 13th — Spooky Art Edition
RiNo Made, 3501 Wazee Street, #109
Friday, April 13, 11 a.m. to 9 p.m.
RiNo Made, an official retail outlet for artwork made by artists working exclusively in the art district, occupied its new permanent digs in the Zeppelin Station market hall in March, but the celebration isn’t over yet — and it may never end. The shop will be decked out in an ode to Friday the Thirteenth this weekend, with a display of spooky art you don’t expect to see in April. It’s all in fun, and you might find something perfect for next Halloween. Don’t let a black cat cross your path…