Get Outside: These Urban Hikes Provide Peace in City Life

Fall colors along the Washington Park Loop. Unsplash / Jeff Bernard
When most think of hiking in Colorado, steep trails in Rocky Mountain National Park are more likely to come to mind than graffiti tours and walks around city parks. But locals would be doing themselves a disservice not to explore these areas, too.

From cultural sites to leaf-peeping paths, picturesque lakes and more, these urban hikes and walking tours in Denver will give you a new appreciation for many neighborhoods:

Washington Park Loop
Washington Park
Easy, 2.3-mile loop
Wash Park has been considered one of Denver’s best neighborhoods, largely for its expansive trail system. There are a number of loop trails to explore, but for the full experience, check out the Washington Park Loop. Along the 2.2-mile path, you’ll spot cyclists, rollerbladers, hammocks strung between trees, and picnickers along the lakes. Those lakes are great places to paddleboard and kayak, and conveniently, both boards and kayaks are available at Wheel Fun Rentals, located in the park.

“I See What You Mean,” by Colorado artist Lawrence Argent.
Unsplash / Miranda Joondeph
Larger Than Life Tour
Central Business District and Civic Center
Easy, 3.4 miles out and back
Denver’s art scene sprawls across the city, but some of the most iconic works can be seen on the free, self-guided Larger Than Life Tour. The 1.7-mile walk passes several outdoor sculptures, including “Bronco Buster,” “On the War Trail," “Lao Tzu," "I See What You Mean” and many others. Starting from the Central Business District, the route ends near complementary attractions. Continue to the Denver Art Museum and the Clyfford Still Museum, which is currently showcasing a new, community-driven exhibit.

A pelican on Lake Ladora in the Rocky Mountain Arsenal.
Abigail Bliss
Lake Ladora and Lake Mary Loop
Commerce City
Easy, 2.7-mile loop
At the border of the Central Park neighborhood lies Rocky Mountain Arsenal, the best free, fast getaway from Denver. What was once a chemical weapons manufacturing site has been restored into one of the country’s largest wildlife refuges. With outdoorsy things to do and twenty miles of trails, it’s a sanctuary for city dwellers, too. On the Lake Ladora and Lake Mary Loop, spot deer, prairie dogs, a variety of bird species and even bison.

The Lowry Dog Park is one of several area attractions.
Unsplash / Sofia Shultz
Lowry Sports Park Loop
Lowry Field
Easy, 2.4-mile loop
This is a great hike for active families, as you'll pass several basketball courts, baseball and soccer fields, playgrounds and plenty of picnic areas, as well as witness incredible views of the Front Range. It's also dog-friendly, with a spacious dog park. But if you prefer something more peaceful, continue your route to the Lowry Reading Garden. There’s also the Lowry Beer Garden, for those who love hikes near breweries.

“Orange, Blue, and Red Stencil Eyes,” by Ahol Sniffs Glue.
Unsplash / Matthew Brodeur
Denver Graffiti Tour
RiNo Art District
Easy, 2-mile loop
Taking the Denver Graffiti Tour is the best way to see the city’s street art. Each Saturday and Sunday, a savvy guide carts locals and tourists through the RiNo Art District, pointing out more than two dozen murals. Artists’ backgrounds and the neighborhood’s history are discussed in detail, allowing for greater appreciation of each piece. Tours are $30; you can book tickets here. But if you'd rather go it your own way, you can walk the neighborhood and locate art found on RiNo Art District's mural map.

Aerial views of City Park.
Unsplash / Cassie Gallegos
Denver City Park Perimeter Loop
City Park
Easy, 2.9-mile loop
The City Park Perimeter Loop offers year-round enjoyment, even ranking as one of the top winter urban trails in Denver. Although it's just 2.9 miles in length, you could easily spend an entire day exploring all the nearby attractions. Along the path, you’ll find the Denver Zoo and the Denver Museum of Nature & Science. Shady trees, scenic gardens and summer jazz events also make this the city’s best park for a picnic. Enjoy the fountains at Ferril Lake, and for even more fun, rent a swan boat from Wheel Fun Rentals’ City Park location. 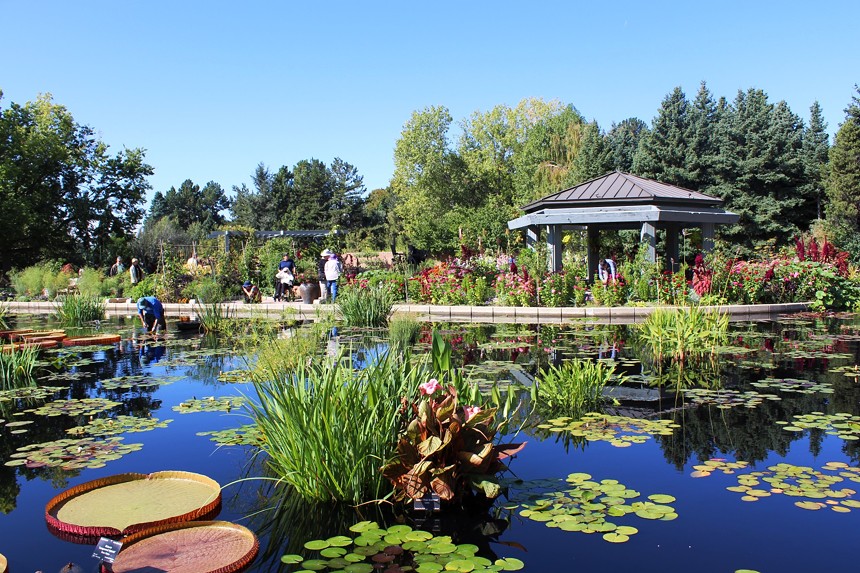 Lush greenery at the Denver Botanic Gardens.
Abigail Bliss
Denver Botanic Gardens
Cheesman Park
Easy, length varies
A walk through Denver Botanic Gardens can be as long or as short as you prefer, but the organization suggests a couple of ways to explore. The monthly self-guided tour is one method; the Bill Hosokawa Bonsai Pavilion is September’s highlight. The Phenology Trail showcases a number of sites with specific plant species, and the public is encouraged to record and share their observations. Be a hiker and honorary botanist by filling out this form and taking in the scenery. Tickets to the Gardens are $15 and can be purchased here.

The Denver skyline from Sloan's Lake.
Unsplash / Steve Adams
Sloan's Lake Loop
Sloan's Lake
Easy, 2.6-mile loop
Though part of this path is under construction until early 2023, the Sloan's Lake Loop still ranks as one of Denver’s best urban hikes, and it’s the best place to catch the city’s sunrise. Sloan's Lake is also home to the metro area’s top running trail, fishing hole and this year’s best new brewery patio. Sure, you might have to detour onto the street a couple of times over the next few months, but a visit here won’t disappoint.
KEEP WESTWORD FREE... Since we started Westword, it has been defined as the free, independent voice of Denver, and we'd like to keep it that way. With local media under siege, it's more important than ever for us to rally support behind funding our local journalism. You can help by participating in our "I Support" program, allowing us to keep offering readers access to our incisive coverage of local news, food and culture with no paywalls.
Make a one-time donation today for as little as $1.