The Colfax Museum Leaves Denver for New Digs in Lakewood 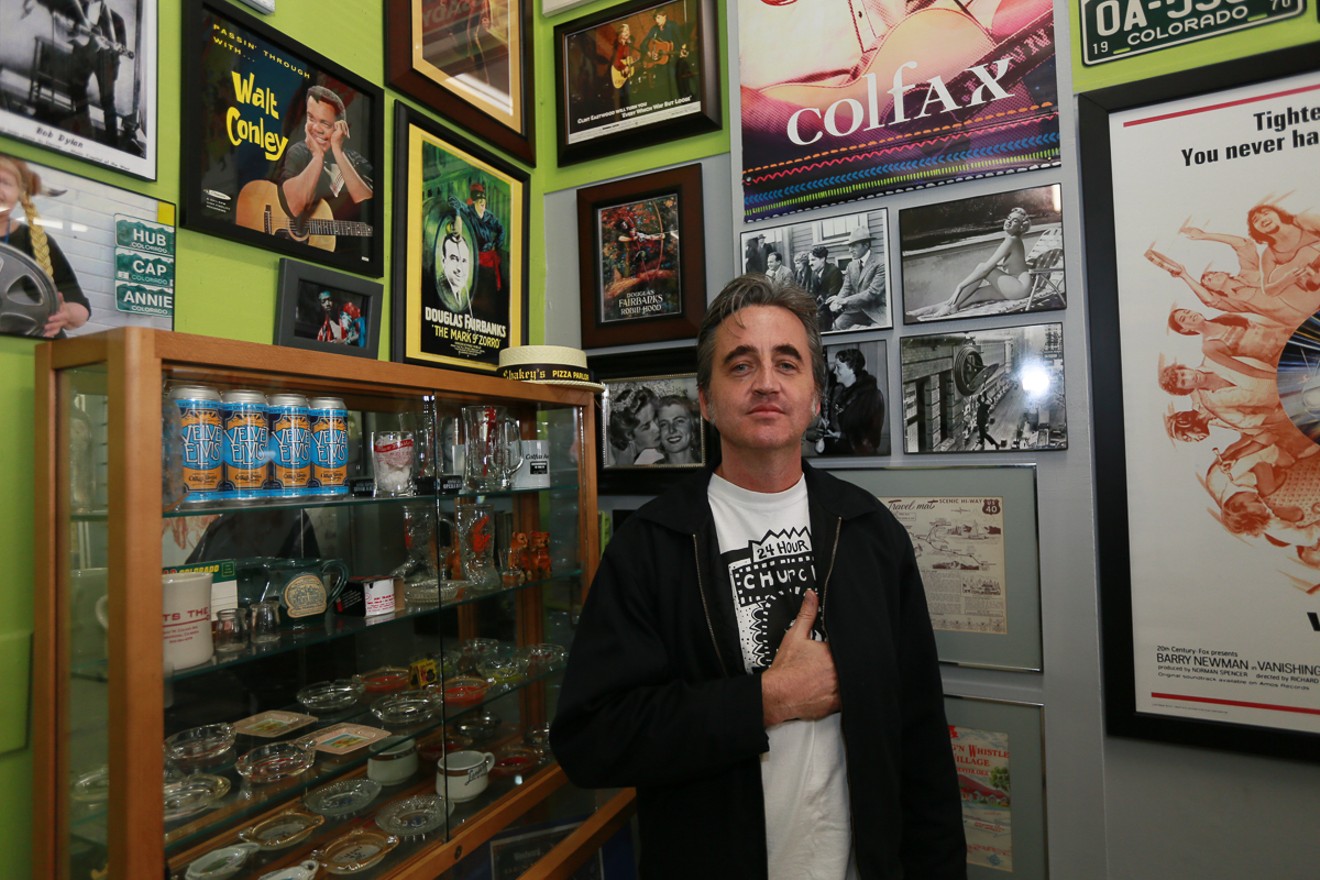 Jonny Barber, at the former home of the Colfax Museum. Brandon Marshall
Jonny Barber first heard about Colfax Avenue while reading On the Road in high school in Salt Lake City. But his earliest experience with the storied street was his first time playing the Lion's Lair in 1995, about six years after moving to Colorado. At that show, he fell in love with the strip.

Fourteen years ago he launched colfaxavenue.com, which documented stories of the strip; last November, he opened the Colfax Museum in the Ed Moore Flower Shop on East Colfax Avenue. But Lydia Mary, who has been running the flower shop for close to four decades, decided to sell the property.

So Barber has to find a new home for the Colfax Museum. For now, he's temporarily relocating it in Lakewood’s 40 West Arts District, in the former Pasternack’s Pawn Shop building, home to Next and close to Pirate Contemporary Art, both Mile High mainstays gone to Lakewood.

Barber says that Bill Marino, director of 40 West, suggested the move to Lakewood and also helped the museum secure its nonprofit status.

“We’re a legitimately recognized institution now, which is amazing,” Barber says. “We’ve got a board of directors now. So I’ve got more people to help, which is more than welcome, because it’s such a huge undertaking.”

While Barber has moved some of his collection of Colfax memorabilia into storage, he’s also taken some to the new location. On Friday, July 6, the Colfax Museum will host a pop-up event displaying items that weren't at the old space, including neon signs, some of which are 25 feet long, that wouldn’t fit in the Denver spot. Barber says the neon sign from Sid King’s Crazy Horse Bar will be reunited for the first time in 35 years with the iconic mannequin that sat above the entrance.

The mannequin from Sid King’s is just one of the many things that Barber has acquired since opening the museum. He also boasts wall hangings from the now-defunct Mataam Fez and the neon sign from Jester Lounge.

A woman who lived in New York heard about the museum and sent Barber a rosary that Pope John Paul II blessed during the night he spent at the Cathedral Basilica of the Immaculate Conception on Colfax. "She said, 'You’re opening the Colfax Museum. You’re going to need this more than me,'" recalls Barber.

Over the past seven months, visitors to the museum have shared their Colfax tales with Barber, like the stories behind actress Sue Lyon’s alleged suicide attempt at the Bugs Bunny Motel and a guy who watched boxer Sonny Liston get a DUI on the avenue. Barber has been documenting the stories on video, and some will go into a book that he’s working on with author Eric Peterson, the brains behind a slew of Denver travel guides. That project is slated for release in spring of 2019.

Barber says there will be an exhibit running at the new Lakewood space, but it won’t be the full collection. He’s hoping to find a permanent home for the Colfax Museum that the nonprofit can own.

“I feel that if we have a dedicated space, we’re going to be able to offer the public something so much better, because we’ll be able to really invest in something that’s growing, that’s going to stick around,” Barber says.
KEEP WESTWORD FREE... Since we started Westword, it has been defined as the free, independent voice of Denver, and we'd like to keep it that way. With local media under siege, it's more important than ever for us to rally support behind funding our local journalism. You can help by participating in our "I Support" program, allowing us to keep offering readers access to our incisive coverage of local news, food and culture with no paywalls.
Make a one-time donation today for as little as $1.