High Beams Convoy Rolls Into Lakewood for an Art-Collective Meetup

The iconic Bendix Building, home of the High Beams art collective. Public Domain
There’s always something going on at the iconic 1929 Bendix Building, a bustling commune of art collectives, galleries and design and fashion concerns located in the Los Angeles Fashion District. At least there was until March 2020, when the pandemic shut down coordinated community exhibitions inside the facility.

Looking for ways around the arts lacuna brought on by COVID, like-minded artists Carl Baratta, Dani Dodge, Alanna Marcelletti, Sean Noyce and Katya Usvitsky, each representing a different resident art collective at the Bendix, put their creative minds together to design alternative exhibitions.

Deciding on a nomadic approach with a road-trip theme, they called their collective of collectives High Beams. At first they threw rooftop and drive-through affairs to accommodate for social distancing, but as High Beams pop-ups continued into better times, things have loosened up.

While High Beams was getting underway, Colorado artists Tobias Fike and Donald Fodness, members of Hyperlink (a collective that started in Chicago, eventually linking groups nationally and internationally), were also feeling the pandemic blues. News out of L.A. about High Beams intrigued them, and they reached out.

“They were starved for ways to get to the public,” Fike notes. But so were Hyperlink's members in Denver, and they got in touch with High Beams.

Hyperlink's collective installation for High Beams #4 at the Torrance Art Museum.
Courtesy of Hyperlink
As a result, a local Hyperlink group was invited to participate in last year's High Beams #4, an event hosted in a parking lot by the Torrance Art Museum in California's South Bay area. The group included Fike, Fodness and Daisy McGowan, Fodness’s wife and director/curator at the Galleries of Contemporary Art, University of Colorado Colorado Springs, as well as Ian Fisher, a Denver artist known for his breathtaking cloud paintings. "We traveled on site for that and met a lot of great Angelenos,” Fodness says. “As a result, we made it possible to bring HB6 to Denver.”

HB6: Convoy is a one-evening pop-up and block party on the grounds of the Rocky Mountain College of Art + Design that not only gifts the Denver area with a welcome DIY summer art happening, but also marks the first time High Beams has crossed California state lines — hence the “Convoy” in the title. Artists from L.A. and other U.S. destinations are all road-tripping to Denver for the evening. In all, nearly sixty artists — many of them from Colorado collectives — are participating, bringing performances, installations, video projections, films and more, all riffing off the vehicular and art-collective themes.

While the show will mostly follow past High Beams standards by setting up outdoors, a few installations will be indoors, including a digital animation program by Denver Digerati.

But the night is also a chance for artists to mingle and make magic together. “Any time you collaborate with someone else, new ideas start leaking out,” Fodness notes. “When you get exposed to these forces, you tend to let go of your own preciousness about your work.”

“As an artist, you can get lonely," Fike adds. “My practice now is almost always about collaborating. It’s enriching, or I wouldn't keep coming back to it. You have to let go of everything and learn to compromise. I’m a fan of art. I find that interactions and exchanges are really energizing — it’s almost like being in a band.” 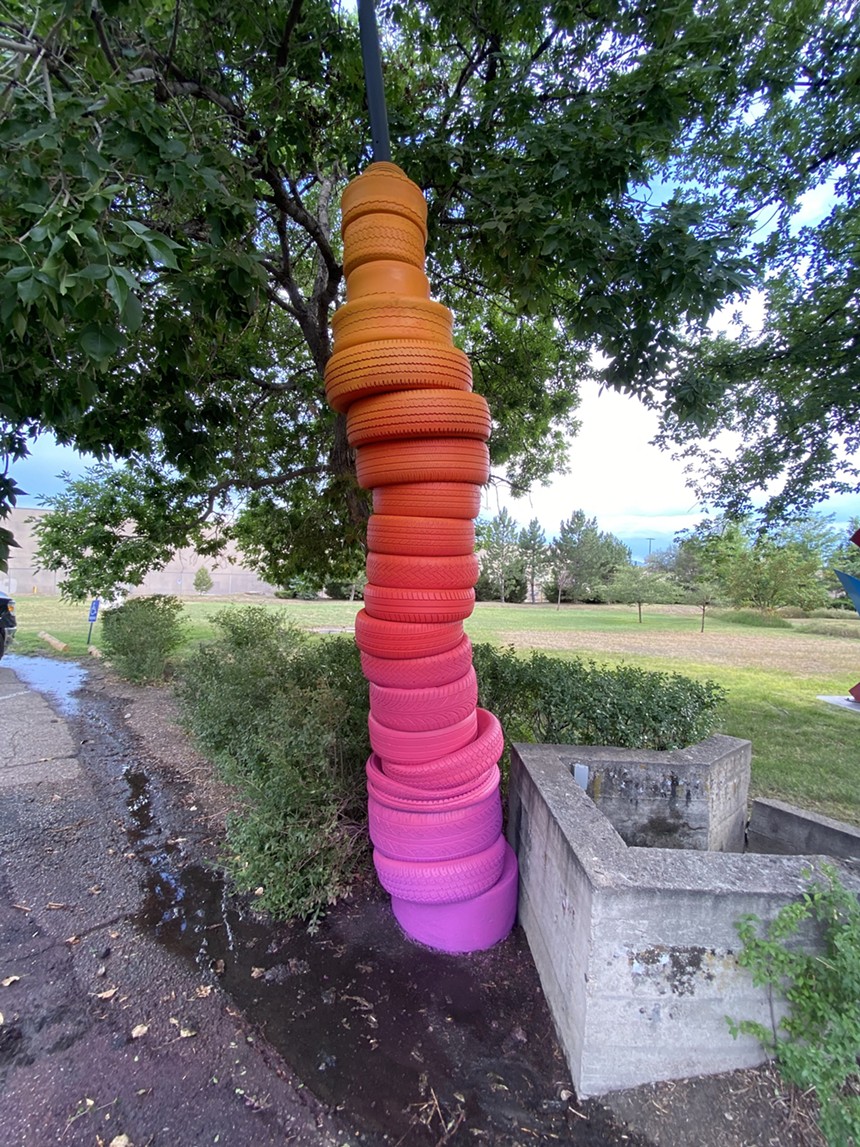 Denver's Birdseed Collective's installation was the first to go up at RMCAD for HB6: Convoy.
Courtesy of Hyperlink
HB6: Convoy is free-form and expressly DIY. Fike likens it to an off-the-wall art fair, but not exactly. “It’s almost a world’s fair kind of thing," he says. "There will be no shortage of fun, exciting visual things. It’s about artists experimenting — some will get it and appreciate it, and some don't look past that.

“Mainly,” he concludes, “it’s about taking your own initiative and not waiting for opportunities to come to you.”