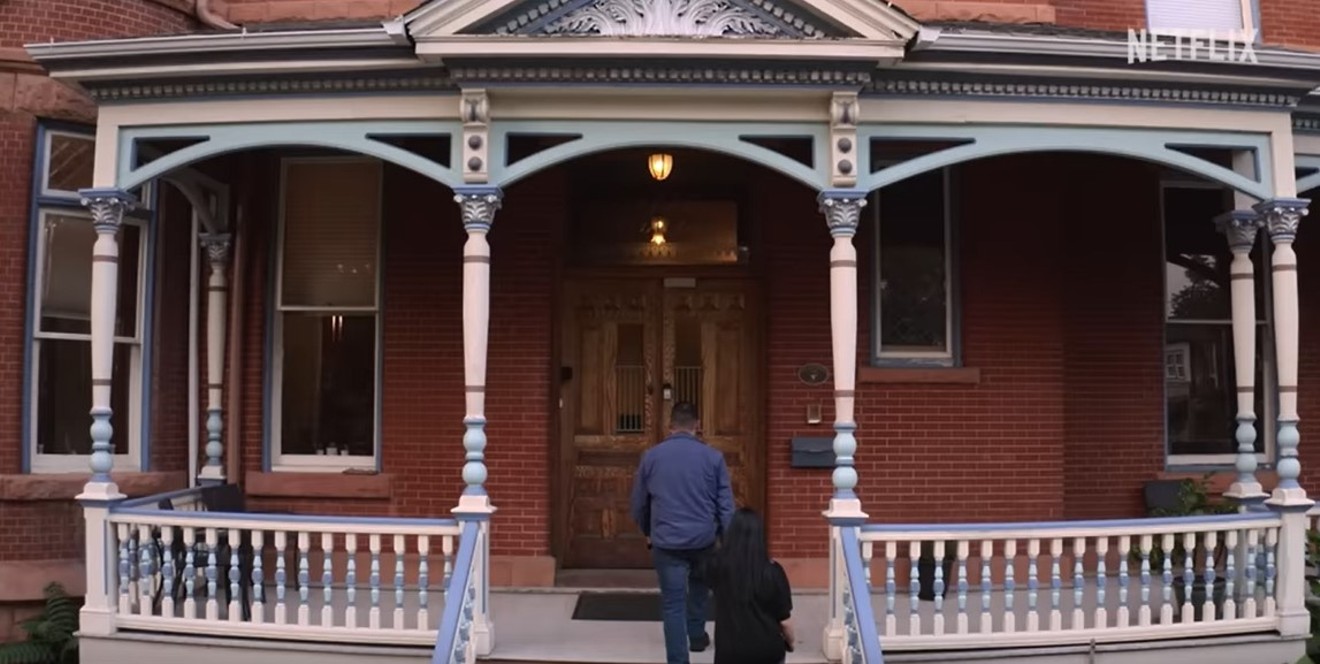 Netflix's 28 Days Haunted climbs the steps to the Lumber Baron Inn. YouTube
Among Denver’s haunted locations, The Lumber Baron Inn and Gardens — as the old mansion at 2555 West 37th Avenue is called these days — looms large. Not only does it boast solid historic and haunted backstories, but it's also one of the easiest ghostly places in town to access: All you have to do is reserve a room.

The Lumber Baron is one of three locations featured in the first season of the Netflix series 28 Days Haunted, which sent small teams to certain spots for four weeks to employ some of the paranormal strategies of legendary ghost hunters Ed and Lorraine Warren and see what spirits they might scare up.

The Lumber Baron was a natural choice to represent the Rocky Mountain West. From its Queen Anne design to its construction during Denver’s 1890s silver boom by the eponymous Lumber Baron himself, John Mouat, the inn ticks all the boxes of a traditional haunted house — including a mysterious and still-unsolved murder story that led to many of its legends.

The victims were two young women, found dead in the bedroom of a tiny rental in the Lumber Baron in October 1970, a time when the over-8,000-square-foot mansion had been split up into fifteen-plus apartments. Eighteen-year-old Marianne Weaver was found shot to death; she’d been visiting her friend Cara Knoche, seventeen, who was found strangled to death and stuffed under her bed. Their killer has never been found.
“It began with one of the producers coming and staying here,” recalls Lumber Baron co-owner Elaine Britten Bryant, who says that the producer had a ghostly experience during her stay. “She had someone come knock on her door in the middle of the night.” The producer assumed an assistant staying down the hall had stopped by, but that wasn't the case. “Each room in the house is kind of known for certain things, and that room she was staying in is known for the knocking, or the rattling of the door handle," Bryant adds.

“When they proposed the idea, their approach was so gentle and so appealing,” she says of 28 Days Haunting. "The show didn’t want to just come for a 48-hour turnaround full of unexplained sounds and suggestive storytelling. In keeping with the 28-days concept, they wanted to spend four weeks getting to know the house and its afterlife residents."

Bryant and husband Joel have turned down most ghost-show inquiries. “But this time, the house really seemed to be open to it,” she explains. “The house very much makes its own decisions about things. Like the period of time the show was asking about — we’re never available during that time. They wanted to come mid-August and stay for almost a month, and we’re usually booked through October without much of a break. But it worked out; it seemed like the right thing to do.”

So Bryant and her husband said yes, with a few adamant rules in place. “Don’t yell at the spirits,” Bryant counts off with her fingers. “Don’t taunt them. Don’t aggressively go after them. What is here is so sweet, and so helpful. It’s actually quite unremarkable; most of what we get are just warnings about something that’s about to go wrong with the house, things like that.”

The murder of the two girls is the focus of the Netflix series segments — "which I get," Bryant says, "because there’s only so much time to go into everything. But there are a lot more spirits that are here, too.” One is Ben, a former soldier whose boot steps can be heard clearly on the floors upstairs when no one else is in the building. And the former butler on the first staircase landing, whose name several psychic visitors have agreed is something like Mr. Jenks or Jenkins. There’s an unnamed little girl named Sarah Michelle, whose father was a trapper in the area during a time that pre-dates the house, who died of “frost,” or what we’d now call hypothermia.

And, of course, the Mouats, both John and Amelia. Bryant says she has more experiences with Amelia Mouat, the lady of the house, who remains as a “loving, very maternal energy.” But Mrs. Mouat still has her opinions on things, including whether the new lady of the house should be doing the cleaning. “I had to stop vacuuming one day and say, ‘Listen, Miss Amelia, women do their own housekeeping now. In fact, men do housekeeping now, too,’” Bryant recalls with a laugh. “I could just feel her sense of horror at it all.”

Bryant feels protective of all the spirits at the Lumber Baron, but the two murdered girls are definitely the most famous. “Originally when we bought the house, I was very diligent to bring them flowers,” Bryant says. “They loved that. And then there came a few weeks when we got really busy and I sort of forgot about it. After a while, my housekeeper was cleaning that room, and when she does, she usually listens to Spotify, talks to the girls, tells them to choose some music. In that room, Spotify plays music from those girls’ era — the Jackson 5, stuff like that. This time, it played Neil Diamond’s 'You Don’t Bring Me Flowers.' I immediately grabbed my handbag and rushed out to buy those two girls their flowers.”

The Bryants were purposefully excluded from the filming; for the titular 28 days, they couldn’t be on site. “So we took off,” recalls Bryant. “We went to Hawaii for a couple of weeks, and then I spent some time in California with my mother. It was wonderful to have that time off. But it was very hands-off. Except for the producers calling Joel a few times just to ask specific questions, we didn’t have anything to do with the process.”

Bryant says that she, her husband and their staffers were all apprehensive about returning to the inn, fearing what might lie in store for them after almost a month’s absence. “I was totally prepared to have to fix things or put the house right again,” Bryant says. “But we walked in the house, and the house just felt amazing. We were all ready for this feeling of dis-ease, you know, when something lingers from a person or a group and it’s not good. But this was wonderful. There was no damage, nothing out of place. So I knew that the team we’d had was very good and had treated the house with respect.”

Although the overall experience was positive, “I doubt we’ll do it again,” predicts Bryant. “The house told the story it wanted to tell. It’s just not where our focus is. It’s not the thing we want to promote. The spirits have been here a lot longer than we have, and we peacefully co-exist, and we all get along pretty well. As much as we have a personal stake in the spirits here, they’re not the focus of our business.”

Still, for one brief, shining, streaming moment on Netflix, Denver’s Lumber Baron Inn has a worldwide spotlight, one that its many stories and spirits deserve. “I’m grateful for how well it all went,” Bryant says. “I feel like the house made sure of all that.”

The Lumber Baron Inn is at 2555 West 37th Avenue in Denver; find out more about its history, lodging and event space on its website.
KEEP WESTWORD FREE... Since we started Westword, it has been defined as the free, independent voice of Denver, and we'd like to keep it that way. With local media under siege, it's more important than ever for us to rally support behind funding our local journalism. You can help by participating in our "I Support" program, allowing us to keep offering readers access to our incisive coverage of local news, food and culture with no paywalls.
Make a one-time donation today for as little as $1.