Meow Wolf looks. Photo courtesy of Meow Wolf
If you've visited Meow Wolf, no doubt you've seen some of the characters who inhabit that world lurking in the shadows or wandering around. They stand out from ticket-paying visitors because of their outfits, often an eyeful of multiple layers and bright colors that can capture attention and generate intrigue in the low-lit setting of Denver's interactive Convergence Station installation. But are these outfits considered art, or fashion? That's the question that comes to mind as Meow Wolf Wardrobe Coordinator Kate Major prepares for the museum's fashion show debut at Denver Fashion Week, which starts on Saturday, November 12.

Major says that as she's creating the clothes for the show, she has to shift gears from envisioning characters for Meow Wolf to seeing a regular person. "Normally, I think with a mindset of clothing to be worn by performers, not being shown as fashion," she says. "So I have to change from trying to convince people that 'this is an alien' to 'this is a person wearing an outfit.'"

It's a new avenue for Major, whose career took her down a path of costume design — and a prestigious one at that. She went from working in retail fashion to taking care of costumes for Ringling Brothers Circus for ten years before the company shut down. From there, she went to Cirque du Soleil for three years, until the pandemic halted those shows. She then landed at Meow Wolf.

When asked how to describe the futuristic, maximalist style of the Meow Wolf characters, she says that "avant-garde" is the term that comes to mind. "It's definitely not day-to-day wear, but there is a lot of street fashion to it," she explains. "I hope what it screams to people is 'fun.'" 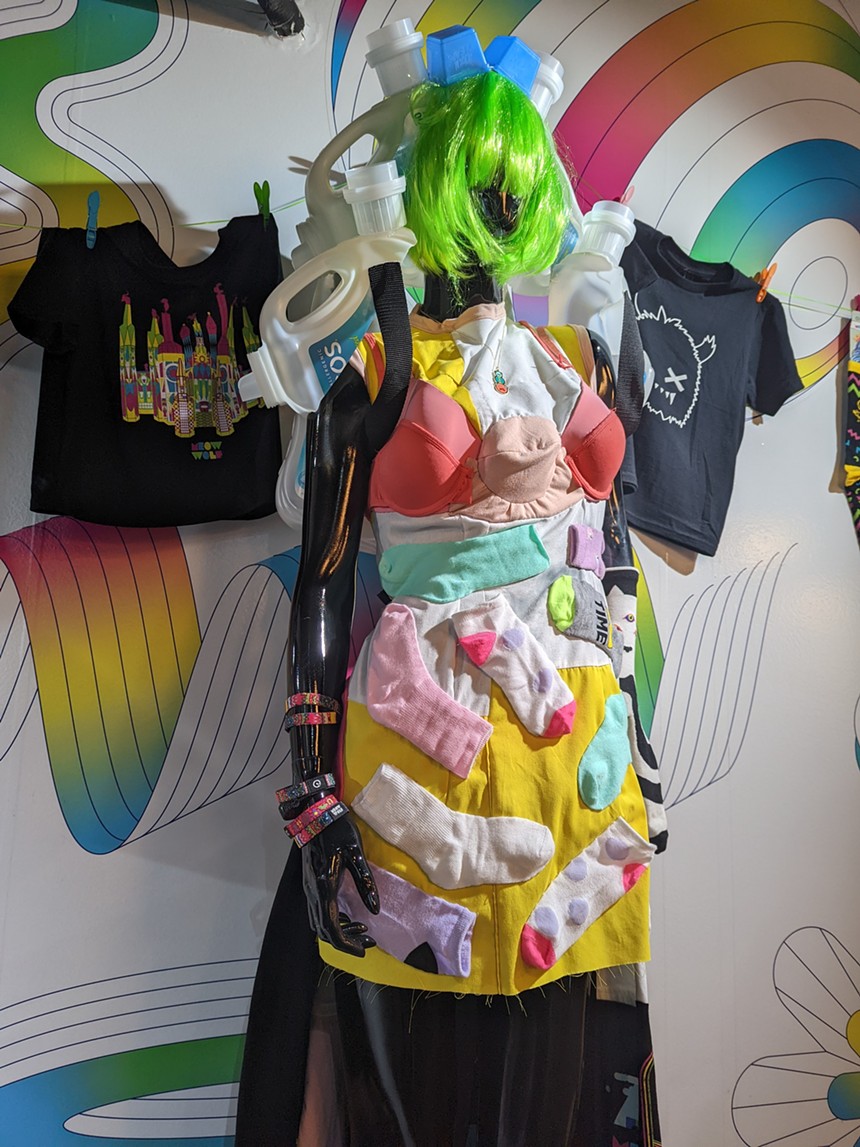 Photo courtesy of Meow Wolf
Sustainability is a huge part of the Meow Wolf costumes, as most of them are made from collected scraps of fabrics and other items. The fashion show will follow that philosophy, as well. "The inspiration and name for the fashion line is 'TRASH.’ It’s all reused materials that would've otherwise ended up in the trash," says Major.

She adds that Meow Wolf is a B Corporation, also known as a "Business for Good," which is a private certification for for-profit companies that meet the highest standards of social and environmental performance, transparency and accountability. A company can qualify by taking the B Impact Assessment to measure its impact on its workers, community, environment, customers and company structure to ensure that it prioritizes people and the planet.

"We are doing things that are environmentally sound to whatever ability we can," says Major. "We save and recycle all our scraps. People in other departments also bring me materials. If I get an idea for a character and I need a certain material, such as tin cans, I'll put out a collection box and ask people to save them for me. We also hit up thrift stores. Sometimes inspiration comes from an object I get, and I think about what I can do with it. We send anything I can't use again to a recycling company."

Major says the biggest influence on her career in creating clothes was her mom. "She taught me how to use a sewing machine. When I was little, I made all of my clothes because I didn't have the money to buy them. And I made things like stuffed animals. I've always been a sewer/crafter," she says. 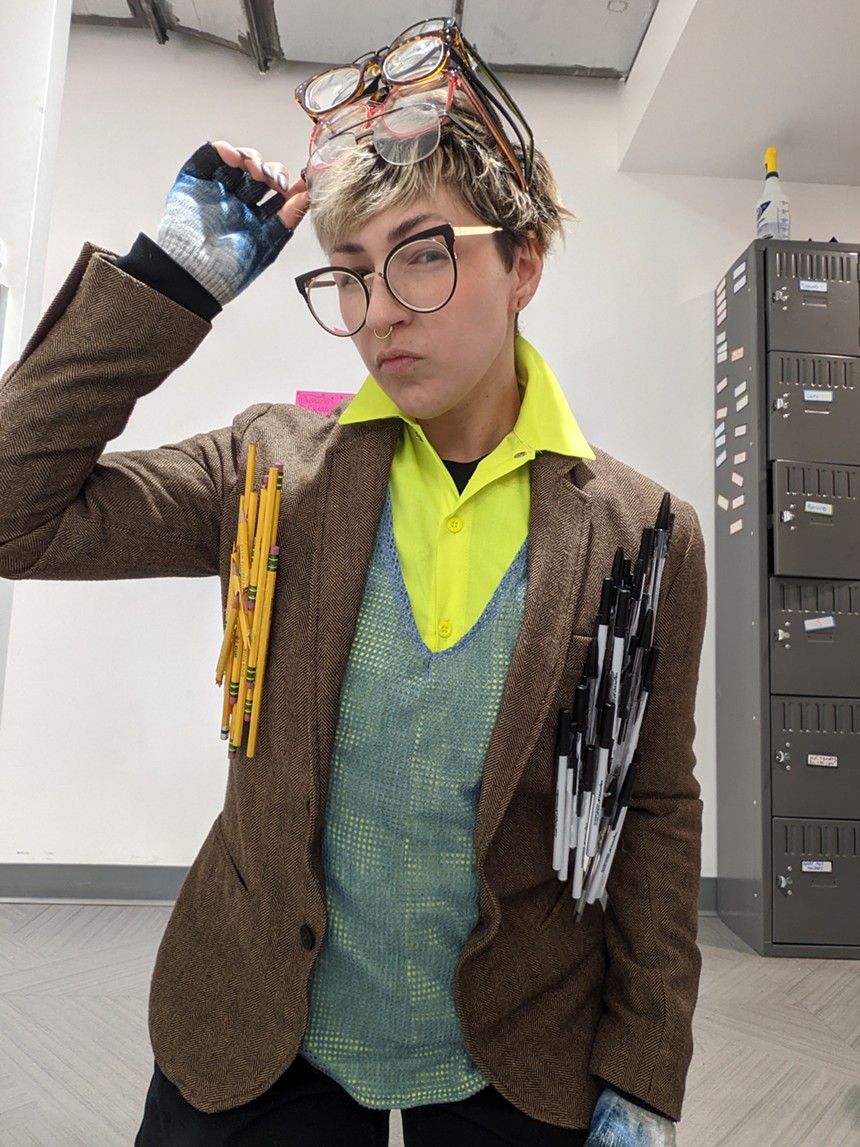 Meow Wolf Wardrobe Coordinator Kate Major.
Photo courtesy of Meow Wolf
Although she's the wardrobe coordinator at Meow Wolf, Major clarifies that it's a team effort to design and fabricate all of the costumes. Ideas for new characters often come from Performance and Events Manager Jessica Austgen, and then a narrative storyline is created. Major then comes in with ideas for what the character could look like, and the team offers input from there. Major says what she loves about her role is the fun and creativity: "I love being able to explore and do creative problem-solving. If I make an outfit and someone sees it and smiles and goes, 'That's amazing!,' it's just the best feeling!"

The same team will be working on the fashion show, bringing their own specialties from graphic design to music curation to lighting. Since the clothes for the fashion show are branded as Meow Wolf, Major says there will be a thread line that connects it back to the exhibit. "I hope people out there recognize the through lines," she says.

She adds that one of the big differences in creating costumes for Meow Wolf and fashion for the show is dressing models instead of performers. "The models don't need to do as much. They don't need as much of a range of motion or to be able to wear the outfit for twelve hours and have it washed over and over. Honestly, it's easier to dress models," she says with a laugh.

While the outfits for the Meow Wolf fashion collection for Denver Fashion Week are being made with people, not characters, in mind, Major says they won't be available for purchase. Meow Wolf plans to keep them on hand to potentially reuse or auction off. For now, the focus is on creating the show and crossing over from art to fashion.

"I'm just so excited about it," Major says. "Our whole mission statement at Meow Wolf is sharing art with as many people as possible. I think this is a great avenue to do that. We'll reach people we wouldn't normally interact with, and in a way that maybe they weren't thinking of fashion as art — and it is."

Meow Wolf TRASH Fashion Collection at Denver Fashion Week, 6 p.m. Tuesday, November 15, Sports Castle, 1000 Broadway. Find tickets, $25-$120, and more information at denverfashionweek.com.
KEEP WESTWORD FREE... Since we started Westword, it has been defined as the free, independent voice of Denver, and we'd like to keep it that way. With local media under siege, it's more important than ever for us to rally support behind funding our local journalism. You can help by participating in our "I Support" program, allowing us to keep offering readers access to our incisive coverage of local news, food and culture with no paywalls.
Make a one-time donation today for as little as $1.