MJ Holton and Billinger's mom, Sue, and sister, Melissa. MJ Holton
If you're around dateline gallery on a Thursday afternoon, you might catch three people outside, just sitting, having a snack and chatting in front of a mural portraying a young man named Andy Billinger.

Billinger was tragically murdered at age 38 on June 29, 2021, while meeting up with someone from Facebook Marketplace to sell an Xbox. He met with the person at a McDonald's parking lot near South Parker Road and Yale Avenue in Aurora to make the exchange, and he was shot on the site. Twenty-two-year-old Treyvion Simpson was arrested in July 2021 and charged with murder.

Billinger's girlfriend, MJ Holton, describes him as someone who was always about "humanity first." He was close with New York businessman and 2020 presidential hopeful Andrew Yang, who even wrote Billinger's eulogy. Holton and Billinger went to Yang's rally in Pennsylvania when he was running for president, and Billinger often campaigned for him on Twitter. "Him and his wife called us and offered condolences," Holton says. "He wrote a really beautiful eulogy. He came to Denver and signed it for us."

Billinger touched many lives, including muralist Chris Haven. Billinger and Haven were both artists and friends, so when Billinger was killed, his family knew they wanted to reach out to Haven to do a mural. Holton says she even sold stickers of artwork Billinger had done to pay for it. "We had just found out Chris was still doing graffiti two weeks before he was killed," Holton says. "Then it was just a matter of buildings. Chris [is] friends with the owner of dateline art gallery, [who] gave us their wall." 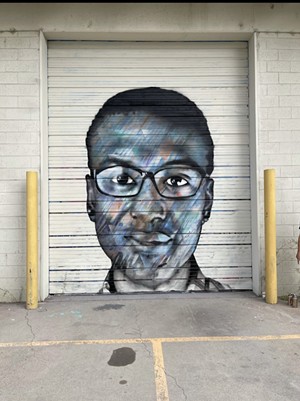 A mural of Elijah McClain painted by Chris Haven on the garage of an abandoned building.
Chris Haven
After finding the right location for the mural, it took Haven just six to eight hours to paint it. Billinger's family and Haven chose a picture of Billinger that they thought best represented who he was, and Haven worked off of that to create the mural.

"He did all of it with spray paint. He started at the right eye and went from there; it's just amazing. He got every detail," Holton says. "After he was done, he was like, 'Is there anything, even little, that you want me to change?'"

Haven says Billinger's family was excited to see the mural finally come to fruition. "They were really happy. It had taken us a little while — over a year, actually — to find a place to do the mural," Haven says. "A lot of places didn't want a portrait on it or the wall wasn't the right size. They [Billinger's family] were really excited." The mural's official reveal happened August 19. Since then, Holton and Billinger's mom and sister have met at the mural every Thursday.

Other notable works Haven has done include a mural of Elijah McClain on an abandoned building at 2950 Brighton Boulevard, as well as "COVID puppies," which he painted in 2020 at 2705 Larimer Street.

Holton says that since Billinger's death, she feels like she's been receiving signs from him everywhere. She found his graffiti tag painted on a sign when she was taking her dog for a walk, even admitting she went to the hardware store, purchased the same sign, and replaced it so she could take the sign with his tag home.

Billinger's mom, his sister and Holton will continue sitting outside the mural on Thursdays to spend time with him. "We don't say rest in peace, we say long live Andy," Holton says. "He will always be here with us."

See the mural at dateline gallery, 3004 Larimer Street.
KEEP WESTWORD FREE... Since we started Westword, it has been defined as the free, independent voice of Denver, and we'd like to keep it that way. With local media under siege, it's more important than ever for us to rally support behind funding our local journalism. You can help by participating in our "I Support" program, allowing us to keep offering readers access to our incisive coverage of local news, food and culture with no paywalls.
Make a one-time donation today for as little as $1.
Katrina Leibee, a recent graduate of Colorado State University, is an editorial fellow at Westword, covering politics, business and culture.
Contact: Katrina Leibee
Follow:
Twitter: @katrinaleibee