Yeehaw! The Flying W Ranch Returns for a Seventieth Season Meanwhile, back at the ranch... Flying W
Brush off the cowboy hat and mosey on down: The Flying W Ranch in Colorado Springs reopened on  May 26, offering its Chuckwagon Supper and Original Western Stage Show for a seventieth season.

The Flying W stands on the homestead where Don Wilson moved his family and a whole bunch of cows back in 1947. Daughter Marian and her husband, Russ Wolfe, soon followed to help the enterprise. The family began offering horseback rides followed by campfire suppers, heavy on smoked meats, to locals in 1953. Increasingly, the Flying W served up live music, too. The Flying W Wranglers band debuted there in 1957, producing evening-at-the-ranch vinyl records over the years and performing with the Colorado Springs Philharmonic, among other groups.

Soon, throngs of customers vastly outnumbered the horses. A replica of an Old West village replaced the riding attraction, with demonstrations of Indian rug-weaving, blacksmithing and other vintage skills. Thirty buildings rose up, from a schoolhouse to a depot for a miniature train, as well as a few tipis. Marian Wilson Wolfe died in 1999, but Russ and the Wolfe family kept their hands on the reins.

All of this came to a roaring halt on June 26, 2012, when the Waldo Canyon fire swept through, leaving only one small building and a tipi still standing in the Western village. Millions of dollars, including donations and grants, and a lot of work finally produced a new facility with a good deal of improved fire mitigation around the area. Near the end of the restoration project, Russ died in 2019, at the age of 94. 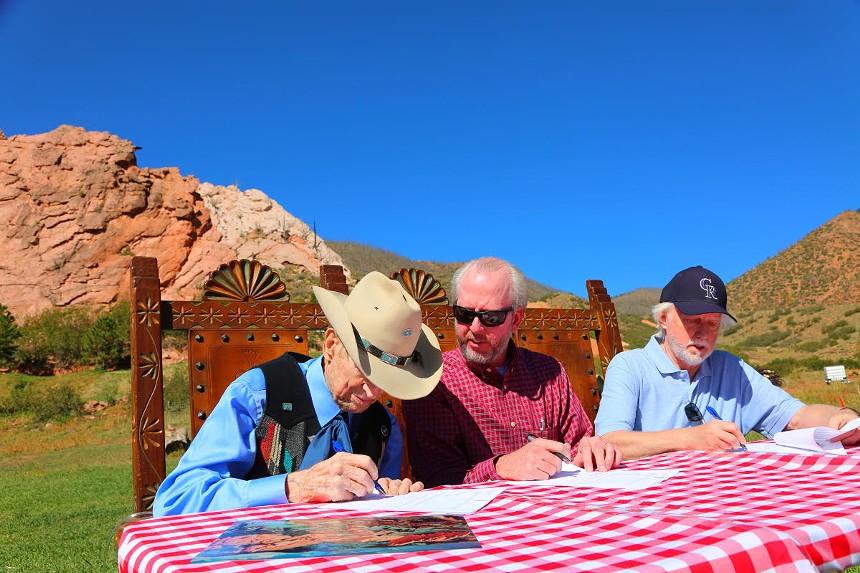 Russ Wolfe continued family traditions at the Flying W.
Flying W
“He didn’t see it finished, but he got to see the restoration plans,” says Leigh Ann Wolfe, his daughter and the current ranch owner. “I had this saying by Tennyson glued to my steering wheel for five years: ‘It's better to have tried and failed than to live life wondering what would've happened if I had tried.’ It fell off just as everything was completed.”

Of course, the ranch’s triumphant reopening in 2020 collided with the COVID pandemic. The Wolfe family stuck it out, herding 18,000 visitors that season. This year, they anticipate offering the Chuckwagon Supper and Original Western Stage Show through September 30.

It’s not all Western swing and nostalgia these days, though. There’s a Flying W Ranch Foundation now, its primary mission “dedicated to the stabilization, mitigation and rehabilitation of the Waldo Canyon burn area in order to educate and protect the community in regards to flooding and conservation.”

The Flying W Ranch is located at 3330 Chuckwagon Road Road in Colorado Springs, and is now open for the season. Admission is free for children under four, $30 for ages four to twelve, $65 general admission, and $60 for 65 and over, active duty and retired military. For information and tickets, call 719-598-4000 or go to flyingw.com.
KEEP WESTWORD FREE... Since we started Westword, it has been defined as the free, independent voice of Denver, and we'd like to keep it that way. With local media under siege, it's more important than ever for us to rally support behind funding our local journalism. You can help by participating in our "I Support" program, allowing us to keep offering readers access to our incisive coverage of local news, food and culture with no paywalls.
Make a one-time donation today for as little as $1.
Charmaine Getz