At Paper Fashion Show, garments must be made from 90 percent paper. Blu Hartkopp
Brielle Killip isn’t a fashion designer, though she’s making two gowns for an upcoming fashion show. She also isn't using fabric to make the gowns — they're created from paper.

Killip is crafting the gowns for the upccoming Paper Fashion Show, held every spring since 2004 (with the exception of last year). Designers compete for cash prizes using high-end paper from manufacturers who sponsor the event, creating garments that push the boundaries of art and fashion. Pretty much anything goes, as long as the pieces are at least 90 percent paper.

Most of the competitors aren’t fashion designers; they come from all walks of life and professions. Killip is a graphic designer with Blue Linen Creative and has participated in the Paper Fashion Show every year since 2016, using it as a creative outlet. “One thing that fills my soul is creating and being able to share that with people," she says. "I’ve always done different things, from furniture to painting. I do creative work all the time with my graphic design business, but a lot of it is for clients as opposed to being creative for myself.”

For Killip, not being in the fashion industry allows her to be free of the traditional rules for garment construction. “I don’t know what that is, so I can come up with an idea and we just figure out how to make it work and move on a body,” she says.

Since she is a regular participant, Killip is always finding little sparks of inspiration for her next project. “I might catch a glimpse of something and take a photo or draw a little sketch. For me, I just like to experiment. All the dresses we’ve done started with a shape or individual piece of paper, and we try different things, like repeating a pattern or finding ways to loop it or knit it together,” she explains.

Killip works with a team that includes her boyfriend, Christopher Geissinger, and friend/model Jennifer Garber. They each bring separate skills to the table. “Chris has worked in construction, so he knows how to build things," she says, "and Jen loves to knit, so she has experience of making something for the body.” 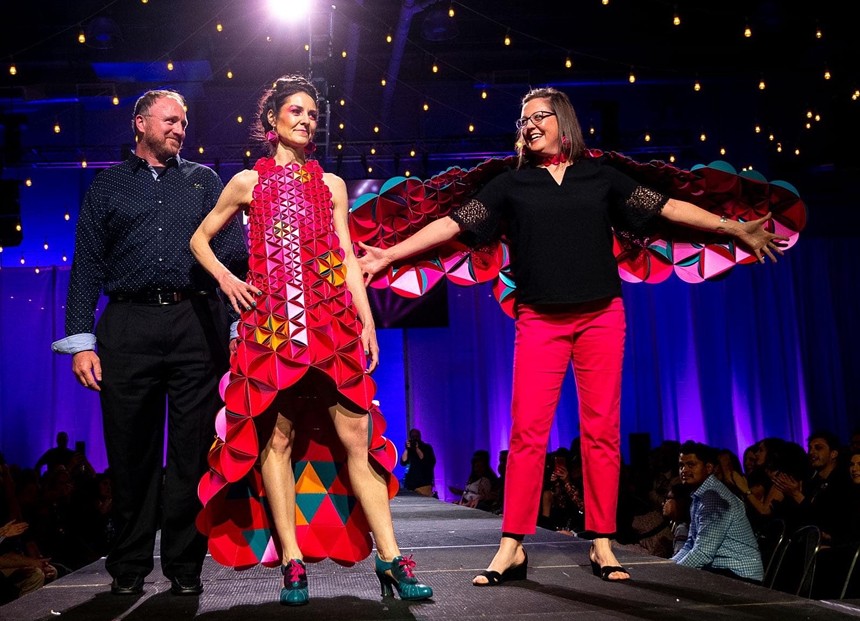 Paper Fashion Show designers Christopher Geissinger, Jennifer Garber and Brielle Killip.
Blu Hartkopp
The construction process can take months, which is fine for Killip, who enjoys sharing the creative experience with her boyfriend; it gives them a hobby during Colorado’s cold winters. They start with a fitting, making a mannequin from a T-shirt and tape around which they can build the garment. But it’s usually not until the full piece is constructed that they start to think about how to get it on and off the model.

“We’ve sewn pieces together; this year we’re knitting it together," she says. "A lot of designers use hot glue — that really is your best friend. I’ve seen some dresses glued right onto the models!"

They also have to think about how they will transport the gowns to the show. “Paper is surprisingly sturdy, especially when it’s in smaller pieces. We did one garment with a large cape that was separate from the dress and transported it in two pieces and then it Velcro'd together,” says Killip.

The audience for the Paper Fashion Show has grown from a few hundred to thousands. This year's event, taking place on Thursday, March 10, at Fillmore Auditorium, will include 37 designer participants. Ya Girl Cedes will host the evening, with music by DJ Simone Says.

“The shows have grown every year," says co-producer Michael Garcia, who handles marketing and entertainment for the event; Garcia is an LGBTQ advocate and owns his own business, Proud Communications. “I got involved around 2016. They asked me to co-emcee. Then they asked me to be part of the production team. It’s been such an amazing ride. I get inspired every day being a part of it." 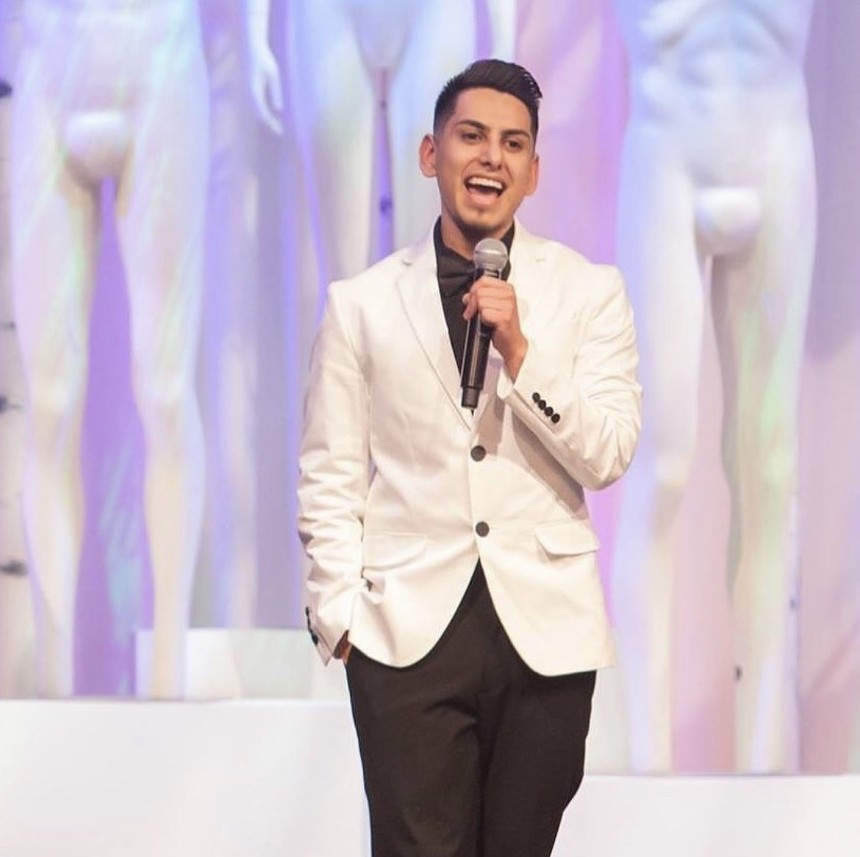 Paper Fashion Show co-producer Michael Garcia.
Soona Studios
The show was started by the Denver chapter of the ONE Club for Creativity, a global nonprofit organization that supports and celebrates creative communities. Garcia says that was a big reason that he got involved. The Paper Fashion Show is a charity event that supports Downtown Aurora Visual Arts (DAVA), which provides after-school arts programs for youths ages seven to seventeen. DAVA's curriculum also includes the Paper Fashion Show. “Students work with the participants to learn how designing works,” notes Garcia.

To date, the Paper Fashion Show and ONE Club have donated over $62,000 to DAVA. “It’s so awesome that we can inspire younger generations to be creative," Garcia says. 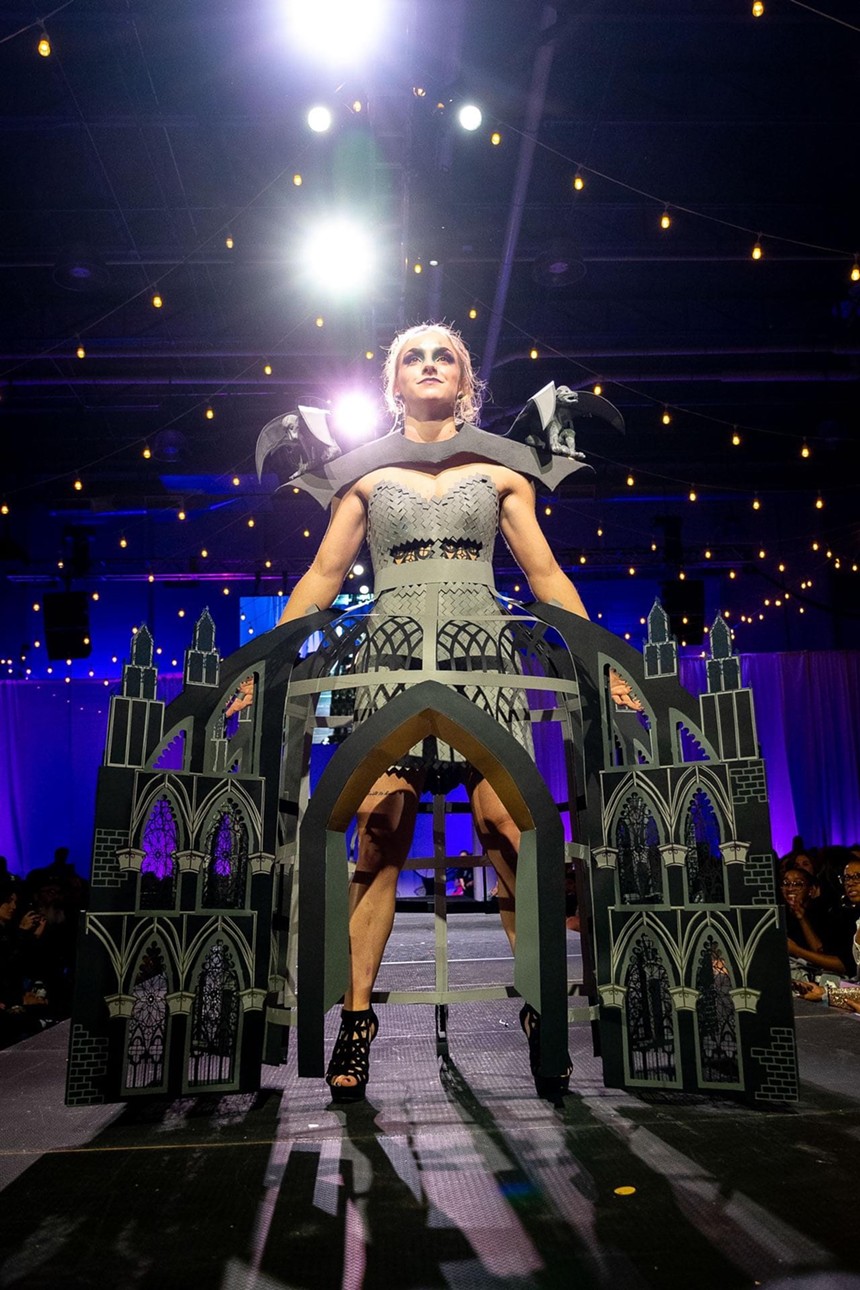 Paper Fashion Show
Blu Hartkopp
The wealth of creativity is really what makes the Paper Fashion Show a must-see event, he says, adding that he and the entire team are looking forward to bringing it back after having to cancel last year.

“We’re excited to come back after the light was dimmed with COVID," Garcia concludes. "It’s definitely a wonderland experience.”

The Paper Fashion Show, 5:30 p.m. Thursday, March 10, Fillmore Auditorium, 1510 Clarkson Street. Find tickets, $35-$105, and more information at paperfashionshow.com.
KEEP WESTWORD FREE... Since we started Westword, it has been defined as the free, independent voice of Denver, and we'd like to keep it that way. With local media under siege, it's more important than ever for us to rally support behind funding our local journalism. You can help by participating in our "I Support" program, allowing us to keep offering readers access to our incisive coverage of local news, food and culture with no paywalls.
Make a one-time donation today for as little as $1.