Pat Milbery Mixes Up Another Reason to Love This City

Pat Milbery and friend. Tom Tercek
Pat Milbery is thrashing around in a claw-foot bathtub in the middle of a RiNo warehouse.

The bathrobe-wearing, scruffy-haired snowboarder-turned street artist is chugging cans of Breckenridge Copper Lagers lined up on a newspaper box while spray-painting a heart on a white board. Collaborator OZWVLD's digital animations are projected onto screens behind him; next to him, DJ Jacob Actkinson spins songs from Rüfüs Du Sol, Zhu, Odesza and other high-key EDM producers that will be released as a mixtape on SoundCloud. There aren't many DJ gigs in Denver in April 2020, or for the foreseeable future. The city's shut down, and clubs won't be reopening anytime soon.

But in the meantime, Milbery’s snowboarding and street-art company, the So-Gnar Creative Division, is creating a series of virtual events to broadcast on Twitch on Monday nights. Much like the live cam of the baby hippo at the Denver Zoo, this is the sort of streamable real-time content now flooding the Internet, attempting to keep residents entertained and connected to what had been Denver’s thriving cultural scene.

This feed takes us into Milbery's rented warehouse space at 28th and Blake streets, where he'll be creating art until the building is demolished later this summer to make way for development. That makes this a very Denver project: Artists are hurrying to make something special, knowing that the space where they're working will soon be gobbled up by the trendy machinations of new Denver.

But Milbery, whose murals are very much a part of the colorful new-Denver landscape, sees these broadcasts, which he’s calling the Love This City Mixtape Series, as the start of something bigger — perhaps a weekly underground warehouse party once things open up again. And as Milbery is known to do, and to do well, he’s recruiting an army of artists, musicians, civic partners and corporate sponsors — Westword among them — for the project.

Maybe the series can support the DJs whom Milbery is recruiting for the weekly Twitch feed. “If I can help a DJ a week make some money, I feel fucking great about that," he says. 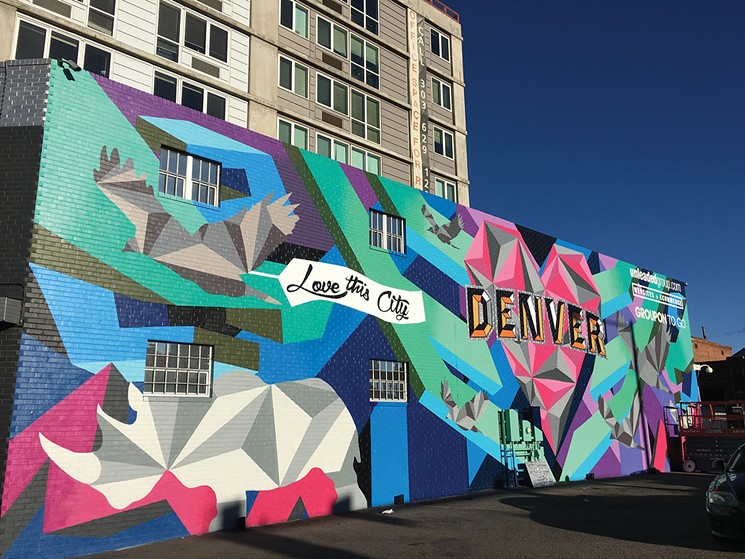 He’s painted hearts in Five Points, the Art District on Santa Fe, Lower Highland, Congress Park, the Golden Triangle and Bear Valley. He's worked with neighborhood groups, art districts and property owners, going through multiple revisions — a process that might infuriate other artists. But Milbery laughs it off. He might even relish it. After all, that’s the business.

While the designs vary, the murals all have the same text: “Love This City.” Loving this city is something Milbery has done since arriving in Denver around two decades ago for the snowboarding.

He liked the city from the start, though he found it a little sleepy. For years, he split his time between Minnesota and Denver, returning home to the Twin Cities to spend time with his mother, who was dying of cancer.

Eventually, he moved to Denver permanently. He had no intention of becoming a competitive snowboarder or a celebrated muralist. He just loved hitting the slopes and making art — mostly prints that he wheat-pasted in neglected parts of town. Back then, there were plenty, and nobody cared what artists put up as long as they weren't destroying or vandalizing property. 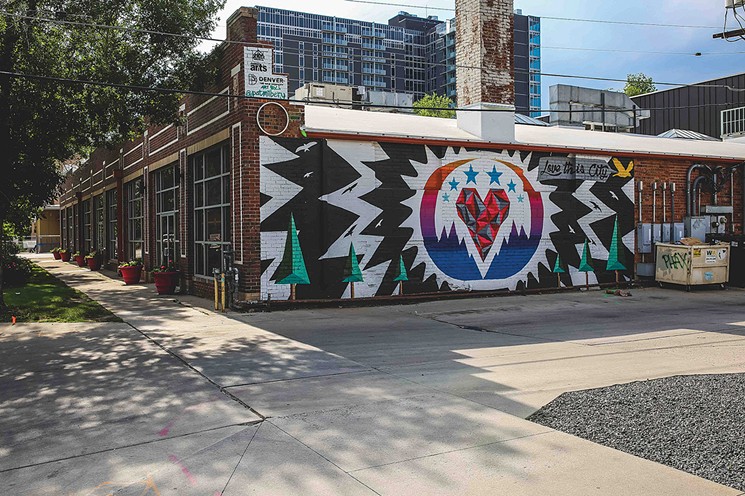 "Heart of the City," 123 West 12th Avenue.
Pat Milbery, Andre Rodriguez
“I was doing a lot more illegal stuff, a lot of propaganda, stencil work or wheat-pasting,” he explains. “I was selling some stuff, but it was small. I wasn’t trying to be an artist. I just loved creating. I wasn’t trying to be a pro snowboarder. That everyday lifestyle made me so happy, so I poured my passion into that. Through hard work and work ethic, it started transitioning into a career.”

Before long, he was being hired by snowboard and ski companies to promote their products, all while competing professionally — not exactly a lucrative career, but enough to keep his creative and athletic habits going. Then he started painting murals at music venues and restaurants in Denver and even in Austin, Texas, at South by Southwest.

“I was loving that integration of the music and art lifestyles,” he remembers.
He toured the country, teaching snowboarding lessons on bunny hills across the Midwest, encouraging kids to follow their passion, building a national reputation for what he was calling the So-Gnar brand. But around 2011, when he returned to Denver one day, he found himself lonesome, doubting the value of building a nationwide company. He wanted something to show for all his work.

“I got back from tour and was like, 'Why am I not painting and reaching people on more of a public level?'” he asked himself. “What can we do for the city? I decided I was not as interested in building the brand as much anymore. It was materialistic.”

Looking around town, he decided he wanted to start making street art ”to bring not only positivity to Denver," he remembers, "but really paint the landscape in a way that people could one, enjoy, and two, feel surrounded by beauty every day. It’s accessible. There’s not a price tag on it for people.”

"Rise Above With Love," 1380 Steele Street.
Pat Milbery, Pat McKinney, Josh Deitchman, Lee New
So he offered his services as a muralist to businesses citywide. His timing was good: Street art was getting trendy, and he was able to use many of his projects as a chance to collaborate with other artists who weren't as adept at marketing.

Among his favorite commissions over the past decade are a massive mural of a baby bear lying on top of its mother that he co-created with kids from the Downtown Denver Expeditionary School in the parking lot of the Emily Griffith Technical College; a 500-foot-long abstract mural on the underpass on West 38th Avenue near Brighton Boulevard; and a 75-foot-by-25-foot canal he painted in Montbello.

“There are tons of murals we've painted around town,” he says, "but the 'Love This City' series is probably my favorite.” 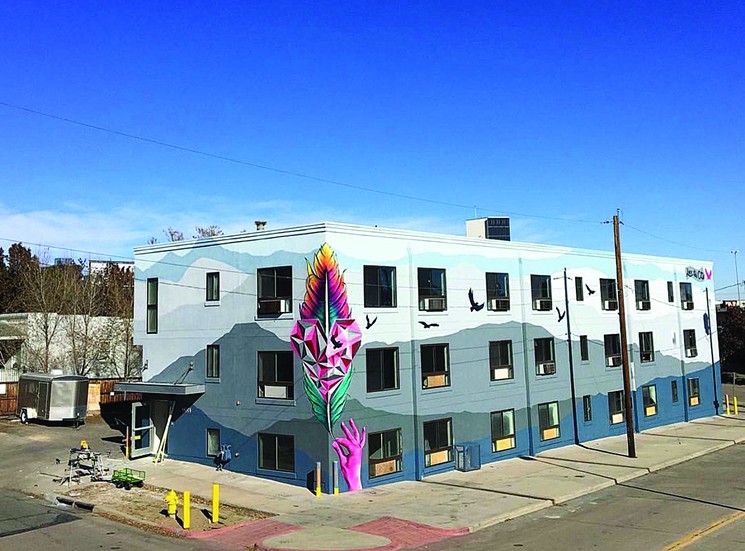 "Freedom of an Open Heart," 3206 Osage Street.
Pat Milbery, Josh Deitchman, Lee New, Ozwvld
He conceived of "Love This City" in late 2016, around the time that Donald Trump was elected president and tensions between longtime Denver residents and transplants were peaking.

“There was something that was building...where Denver was changing so much,” he says. “That year was such a massive growth year, so there was this huge gentrification cloud that was lingering in the sky, mixed with this uncertainty on the political spectrum. A lot of change was happening, and it was happening so fast.”

He wanted to ease the tensions through his art, bring a sense of community back to the city. “I felt like I needed to contribute something of love and make people drive by every day and realize why they love where they are," he explains. "And show another reason to love Denver, why you love this city, and how you can continue to love this city through these uncertain times.”

The hearts he started painting as part of the series reflected personal turmoil that mirrored what was happening in Denver. “It came from a dark place when I made that," he recalls. "My heart was fucking ripped into pieces at that time, but I knew those pieces could come back together. I felt like that was happening to Denver. People can help each other re-mold. Neighborhoods can find ways to connect and re-bond.” 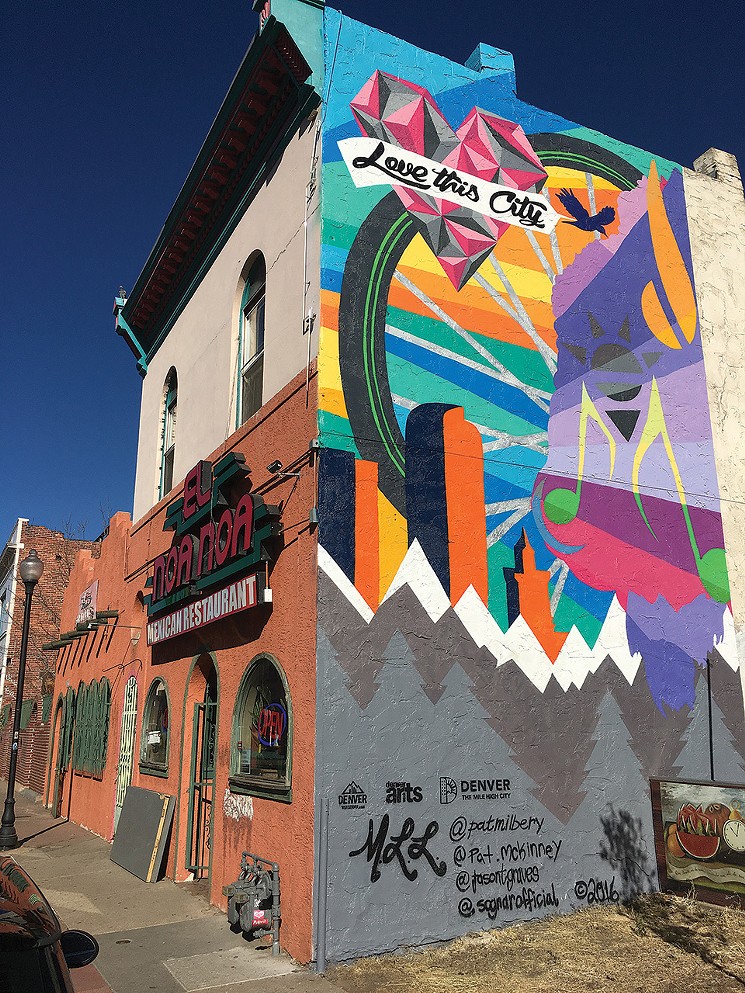 "We Love, We Roam, We Paint in Color," 722 Santa Fe Drive.
Pat Milbery, Jason Graves, Pat McKinney
"Love This City" connected so well with residents that the first piece in the series, painted on the wall between El Taco de Mexico and El Noa Noa on Santa Fe, became a symbol for the tenth annual Denver Arts Week. And Visit Denver, the city's tourism group that sponsors that event, just launched LoveThisCityDenver.com, an online resource for supporting Denver tourism and hospitality businesses through the COVID-19 crisis.

And Milbery will soon make his love for the city even more concrete: He's painting a massive mural on the now-permanently closed section of Bannock Street between the Denver City and County Building and Civic Center Park.

That park was the brainchild of Mayor Robert Speer, and it took him most of the first two decades of the twentieth century to complete the project, which opened in 1919. “One hundred years later, we’re adding a mural to it,” Milbery says. “It’s a big, big honor to have your art in a place that’s considered super-historic.” 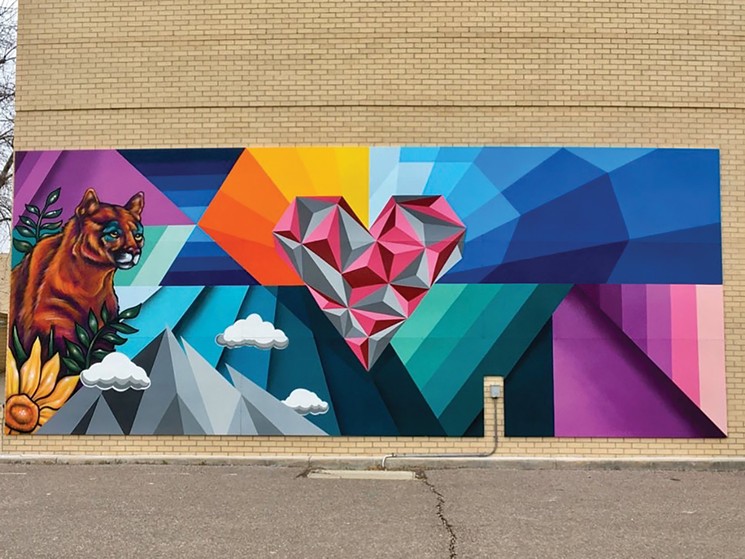 Watch the Love This City Mixtape streams at twitch.tv/so_gnarcreativedivision, and see more of Milbery's work at patmilberry.com.  Take a tour of his "Love This City" murals at LoveThisCityDenver.com.
KEEP WESTWORD FREE... Since we started Westword, it has been defined as the free, independent voice of Denver, and we'd like to keep it that way. With local media under siege, it's more important than ever for us to rally support behind funding our local journalism. You can help by participating in our "I Support" program, allowing us to keep offering readers access to our incisive coverage of local news, food and culture with no paywalls.
Make a one-time donation today for as little as $1.