Keith "Scramble" Campbell is a mainstay at Red Rocks. Scramble Campbell
Keith “Scramble” Campbell is an artist-in-residence at Red Rocks Amphitheatre. For the past 22 years, he’s been a mainstay at the venue, documenting its shows through abstract acrylic paintings of the performances. Likening his brushes to an instrument on stage, he takes cues from the musicians around him, harnessing the same improvisational mindset as the jam bands he works with, such as Widespread Panic and the String Cheese Incident.

“The music really dictates how the show goes on,” says Campbell. “If it's an acoustic show where they’re just playing, it can be a very stiff painting that doesn't have a lot of movement inside of [it]. But if it's Nine Inch Nails, it's big, it's angry. And if you're channeling something that is going fast, you’re going to be fast and physical. However, it's not just from a physical standpoint. Sometimes I'm looking for a slower song to tighten up the painting, because when it’s fast, it’s very abstract and very impressionistic. I could do a better painting if I just sat in a chair and did the painting, but that's not fun.”

Just as musicians on stage contend with the elements of an outdoor venue pressed against the windy slopes of the Dakota Ridge, so must Campbell’s art. “When you're out there with the elements, you either embrace Mother Nature or you collaborate with it,” says Campbell. “I was pelted on with hail last year for Susan Tedeschi and Derek Trucks. The whole planet was underwater, and I had to go through with it because I couldn't be put up in someplace that was dry. [The paintings] are gonna be an authentic capture of the show, and everybody that went to that show got wet.” What resulted was a vibrant cascade of colors that pour off the canvas, not through artistic license, but because his wet acrylics had to contend with a bombardment of water and ice. 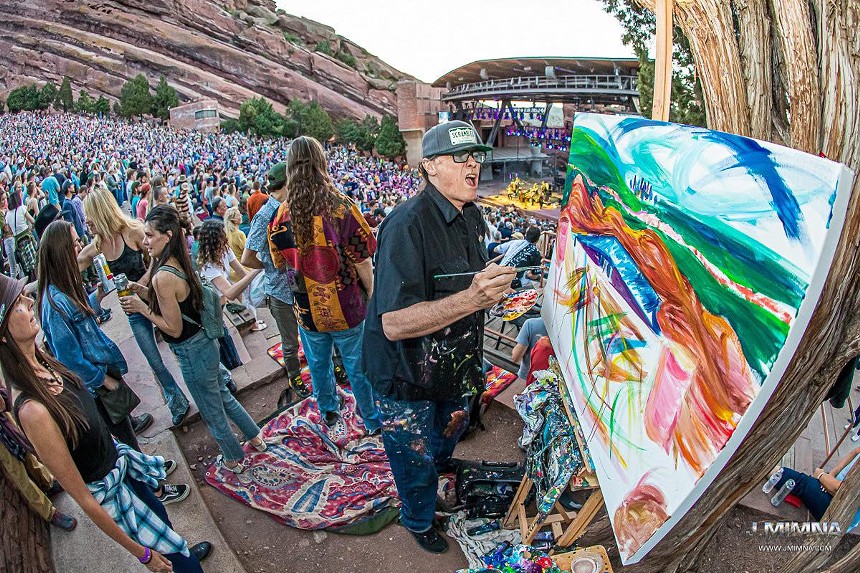 Campbell's paintings take cues from the musicians around him
Scramble Campbell Facebook page
Twenty-two years ago, Red Rocks was just an iconic venue that Campbell had seen on MTV, when U2 aired its Live at Red Rocks: Under a Blood Red Sky documentary. Then, in 2000, he traded Todd Nance, the drummer for Widespread Panic, a painting for a backstage pass to Panic's summer tour. With that pass in hand, he traveled over 37,000 miles, east to west, painting the band at the Greek Theatre in Berkeley, all the way to the Beacon in New York. One of these stops was at Red Rocks, where Panic played a sold-out show.

“It was special coming out to a sold-out show at Red Rocks, never even having been through there, and going through the backstage and seeing all these pictures of all these musicians from throughout time," he recalls. "And then you're walking out to a sold-out show, painting on one of the planters. It was surreal.” In 2004, he and his wife, Shay Berry Campbell, made the move out to Colorado permanently.

From 2000 to 2005, he became friends with members of the String Cheese Incident, Blues Traveler and Leftover Salmon, becoming a frequent painter at their Red Rocks shows. Upon seeing a Bill Kreutzmann art exhibit with Grateful Dead photographer Jay Blakesberg in the newly opened Red Rocks visitor center, Campbell realized he had an opportunity. In 2005, he proposed an exhibition of his own at the visitor center, which was accepted. Since then, he’s hosted the annual Scramble Campbell Red Rocks Experience, which is now in its seventeenth year.

Campbell designed the experience to be more than just viewing his art and seeing the topographical properties of acrylic paint that are lost in photographs. This year's display is no exception, and he’s integrated various forms of technology to make the exhibit more exciting and educational.

“We're starting to use QR codes, where you stick your phone right up to it and it brings you to the website or brings you to a video, bringing you into the experience,” says Campbell. “Normal tourists going through the exhibit aren’t going to know who String Cheese Incident is, but they can pop on this thing and watch a minute video. My wife and I had a video camera early on in the ’80s. We've been together 27 years, so she's been videotaping a lot of these paintings getting done since early on.”

In some ways, he says, the exhibit provides a different way to see his work. While most people who see him paint at concerts won't see the finished project until the show, those who didn’t attend the concert are able to see the finished work first and then experience the music. These unique contexts have always driven Campbell’s career, whether that’s touring around with jam bands or painting at raves in the early ’90s.

Campbell had his crack at the formal art world, being a vice president at the Orlando Museum of Art. However, he prefers the expression of the music industry: “You know, the art world can be stuck up. I like the music business much better. It's more my peeps.”

The 17th Annual Scramble Campbell Red Rocks Experience runs through June 26 at the Red Rocks visitor center, 17900 Trading Post Road.
KEEP WESTWORD FREE... Since we started Westword, it has been defined as the free, independent voice of Denver, and we'd like to keep it that way. With local media under siege, it's more important than ever for us to rally support behind funding our local journalism. You can help by participating in our "I Support" program, allowing us to keep offering readers access to our incisive coverage of local news, food and culture with no paywalls.
Make a one-time donation today for as little as $1.