Supernova Director’s Picks: Ivar Zeile on the Best of the Best Expect the unexpected at the 2018 Supernova Digital Animation Festival. Jack Wedge
As Supernova returns for a third year, Ivar Zeile, the director of the downtown digital animation, is seriously jazzed. After spending two years of running a major festival with unconventional parameters (and hosting outdoor LED screenings on street corners for several years before that), he thinks he’s got it right. That means more content on more screens, some technical streamlining and a concerted nod to recognizing the sometimes difficult medium of digital animation as art for art’s sake, as opposed to mere entertainment.

“It does seem like everything is making sense, and things are flowing better this year, and I’m glad there is this much content this year, but it’s harder to manage,” Zeile admits, noting that recognition for the event has been growing throughout the global digital animation community. "I think we’ve reached the point where 75 percent of our entries are from submissions. People are paying attention, and we’re getting a variety of new artists and good content.”

For better access, some festival programs will air simultaneously on multiple screens around the Denver Theatre District, including a new indoor LED monitor inside the Ellie Caulkins Opera House, after weather rained on Supernova’s parade in 2017. “Last year, part of the programming suffered,” Zeile says. “People had to stand in the rain. The way I view it, some people love standing outside on a corner, and others will like being inside in the Ellie.”

Supernova's main event is a noon to 10 p.m. marathon Saturday, September 22, in the Denver Theatre District, with additional programming, from gallery openings to an educational forum, scheduled between now and September 23. With so many offerings, it's hard to self-curate a plan of attack for this year's spread, so we asked Zeile to share some overall festival picks.

While he's happy with everything, from beginning to end, he did provide some not-to-miss selections, arranged by date. 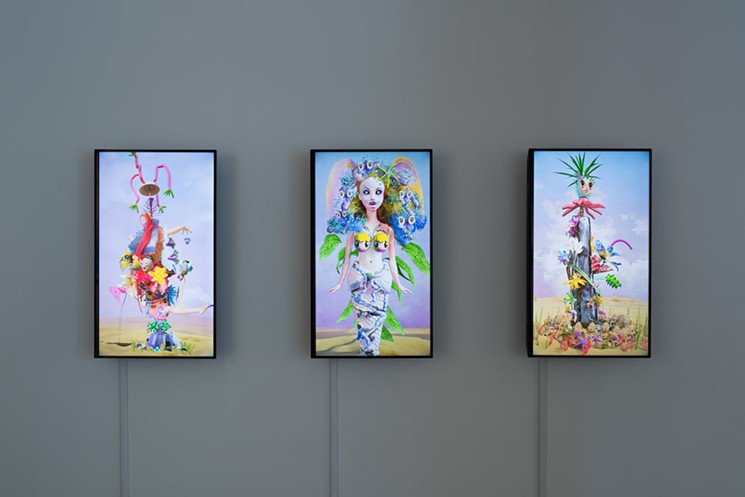 Katie Torn, "Low Tide," installation view.
Katie Torn
Reality Bytes Exhibit/Supernova Launch Party
RedLine, 2350 Arapahoe Street
Friday, September 21, through November 4
Opening Reception: Friday, September 21, 6 to 9 p.m.
Zeile, a former gallerist at the now-shut Plus Gallery, says he enjoyed resharpening his skills as a gallery curator for this centerpiece review of some of Supernova’s most talented animators. “Really, to me, it harks back to when I had a physical gallery space and first started discovering digital animation,” he says. Not only is he pleased to be able to work with RedLine, a premier art space in Denver, but Zeile also hopes people will take the time to see smaller animation works up close in an intimate gallery setting. The opening also serves as an artsy launch party for Saturday’s downtown tour-de-force, with a mystery DJ to provide the beats and visual sampling by Zeile.

Supernova programming: Reality Bytes
Denver Performing Arts Complex Galleria, Ellie Caulkins Opera House, and 14th and Champa streets LED screens
Saturday, September 22, noon
Supernova’s theme in 2018 is Reality Bytes, as reflected in the title of the RedLine exhibition, as well as by this top-notch, invigorating kickoff program leading into ten solid hours of screenings that follow throughout the day.

Supernova Special Election 2018, Invitational Program
Skyline Park, 1600 Arapahoe Street
Saturday, September 22, noon to 8 p.m.
A new, corner-turning LED screen at Skyline Park will be put to use experimentally for a daylong loop of 32 films by returning Supernova veterans from here and everywhere, competing for a $1,000 in cash prizes in a contest that will be judged by the audience. “It’s such a strange screen, but these artists want to work with something that interesting,” notes Zeile. “As a collection of works, it’s the most unique thing we’ve ever done. In fact, it might possibly be the most unique thing done on an LED screen anywhere in world.” Watch the show anytime throughout the day, pick up a ballot at the Skyline Beer Garden, and cast your vote before the end of the day – you’ll even get an “I voted” sticker for your trouble. Supernova’s first-ever Student Competition works also will be in rotation up on the Skyline screen all day, showing off young artists vying for $500 in cash prizes.

Colorado Artist Spotlight
Denver Performing Arts Complex Galleria, Ellie Caulkins Opera House, and 14th and Champa streets LED screens
Saturday, September 22, 1:30 p.m.
As Supernova’s director, Zeile is careful to curate for a fair representation by Colorado artists. As this seven-animator showcase proves, the locals can compete alongside anyone in the world – and several of them, including Chris Coleman, Kendra Fleischman, Quintin Gonzalez, Laleh Mehran and Ryan Wurst, will be vying for your vote in the invitational competition noted above.

Student Shorts
Denver Performing Arts Complex Galleria screen
Saturday, September 22, 5 p.m.
This shorts program with an international reach focuses on submissions by digital animators in progress. Says Zeile: “The content we have just from schools of animation is mind-blowing — the European schools I discovered are so incredible. As we broaden our reach into international circles, it substantiates the kind of stature that we’re getting.” Have a look at the future of a morphing medium.

Third Annual Juried Competition
Denver Performing Arts Complex Galleria, Ellie Caulkins Opera House, and 14th and Champa streets LED screens
Saturday, September 22, 6 p.m.
One of Supernova’s signature programs, this peer-juried competition offers an award that comes with prestige (and $5,000 in overall prize money) for a select, vetted group of emerging and veteran artists. Judges Katie Torn, Robert Seidel and Max Hattler, who are all participating in Supernova in other capacities, will cherry-pick competitors for one lucky winner.

Jack Wedge Solo Spotlight
Ellie Caulkins Opera House, and 14th and Champa streets LED screens
Saturday, September 22, 7:30 p.m.
Jack Wedge, an undergrad animator at NYU who came out of nowhere to win second place in the Supernova juried competition last year, impressed Zeile enough with his unstudied punk style that he was offered the prestigious solo spot. “Each year, I don't sit there and say, ‘Oh, who will it be?’ It’s usually more of a lightbulb moment, and with Jack it was that way," Zeile explains. "This guy’s stuff is crazy cool – he’s going to be a big name in some capacity someday.” Aujik, "Impermanence Trajectory III: THALAMUS."
Aujik
Go Digital/Post-Supernova Bash
Denver Performing Arts Complex Galleria and Ellie Caulkins Opera House
Saturday, September 22, 8:30 p.m.
The after-party is a new addition to the Supernova experience, taking the fest one step closer to fitting a traditional film festival mold. “All the programming has come together to formulate one perfect vision, and all the content will show on multiple screens,” Zeile says. "Then you can shift inside for an after-party. It’s a cool way to end the festival.” After award announcements, the party in the Ellie will spill out onto the DPAC Galleria for an evening of dueling screens, indoors and out, against DJ soundscapes by Deep Club and visuals by Ryan Wurst.
It's all free, except for the bar.

“Hattlerizer 4.D” and “Fulcrum”
Roser ATLAS Center 320, 1125 18th Street, University of Colorado Boulder
Sunday, September 23, 5 p.m.
Not only is this free program a stunning coda to Supernova, but it shows off the University of Colorado Boulder’s state-of-the-art ATLAS Black Box Experimental Studio with work that makes full use of its built-in technology and equipment. Festival jurors Max Hattler and Robert Seidel, with Ryan Wurst, will be set loose to do their thing in the multimedia wonderland. If you’re into the next level of a rapidly growing genre, the trip to Boulder is totally worth it.

For more information, screen locations, auxiliary programs and schedules for Supernova programs, visit the festival home page. All events are free except the Sie FilmCenter screening on September 20.
KEEP WESTWORD FREE... Since we started Westword, it has been defined as the free, independent voice of Denver, and we'd like to keep it that way. With local media under siege, it's more important than ever for us to rally support behind funding our local journalism. You can help by participating in our "I Support" program, allowing us to keep offering readers access to our incisive coverage of local news, food and culture with no paywalls.
Make a one-time donation today for as little as $1.