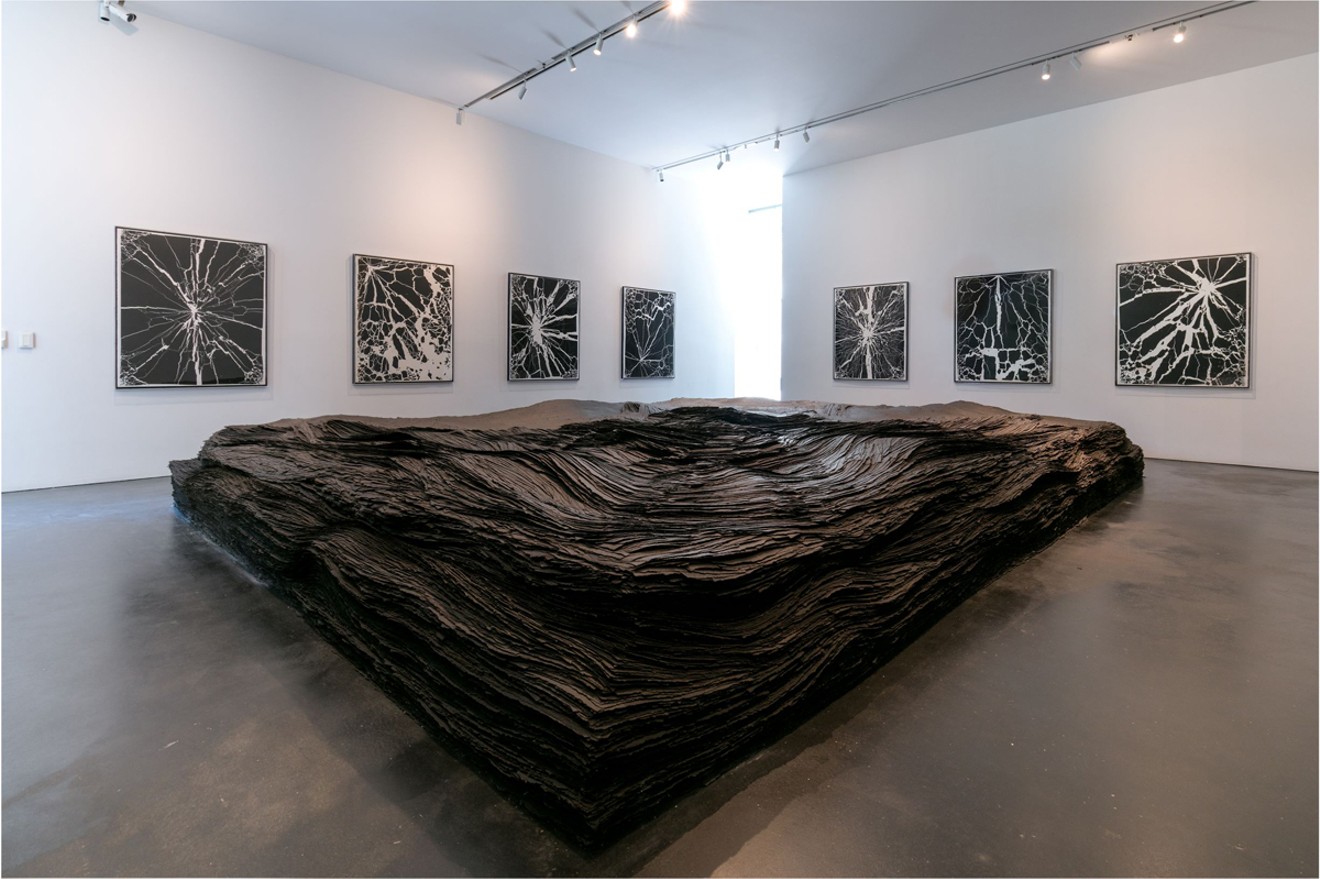 One of the Museum of Contemporary Art Denver’s specialties is the all-encompassing exhibit, which often takes over the entire museum. In recent years, spectacular displays have been devoted to the obsessive and over-the-top efforts of such artists as Mark Mothersbaugh, Marilyn Minter and Cleon Peterson. Now it’s Tara Donovan’s turn.

The fantastic Tara Donovan: Fieldwork was organized by MCA curator Nora Burnett Abrams, who began work on the project over two years ago — and it shows in the ambitious result. Abrams had been aware of Donovan for decades, even before the artist first received widespread notice after her “Ripple” was included in the Whitney Biennial in 2000. That piece, like all of Donovan’s signature works, was made from an aggregation of an everyday, functional material — in this case, concentric circles of copper cable — made non-functional through Donovan’s attentions. 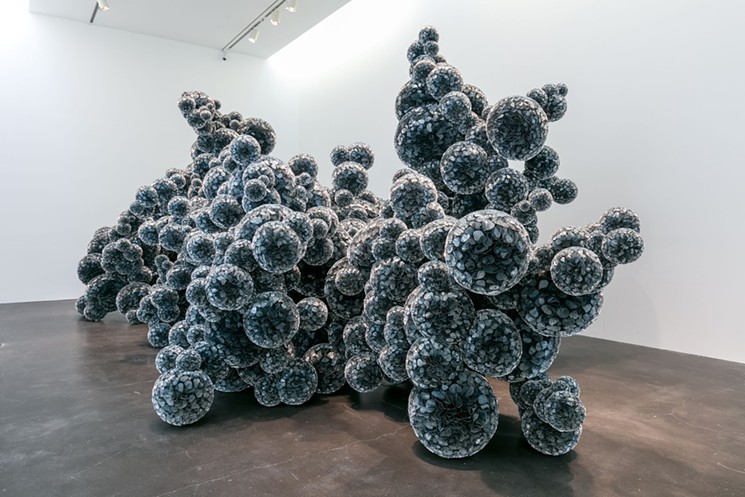 “Untitled,” Mylar sculpture by Tara Donovan.
Courtesy of the artist and Pace Gallery/photo by Wes Magyar
Born in 1969, Donovan grew up in the suburbs of New York City. She started at New York’s School of Visual Arts in 1987 but ultimately transferred to the Corcoran College of Art and Design in Washington, D.C., graduating in 1991. Abrams has included one Corcoran-era piece, “Untitled,” in which Donovan has inserted scores of black rubber cylinders into a concrete tile; it shows the seeds of the artist’s mature sensibility, organizing multiples of a single, inexpensive material into a coherent whole. Early on, inexpensive material was essential, because Donovan worked full-time as a restaurant server while attending grad school at Virginia Commonwealth University, where she earned an MFA in 1999. Even after the Whitney breakout a year later, Donovan continued to wait tables. Finally, after she was taken on by Ace Gallery in Los Angeles in 2003 and later the famous Pace Gallery in New York, she was able to devote herself to art.

Aside from this one student work, the pieces here date back over the last twenty years, but Abrams has designed the show according to aesthetic affinities rather than chronology: Basically, she clusters pieces that look good together. In many cases Abrams has simply put parts of a specific series together in a single space, but the way the spaces unfold, and the way that different series intersect with one another, demonstrate her instinctual, unerring taste. 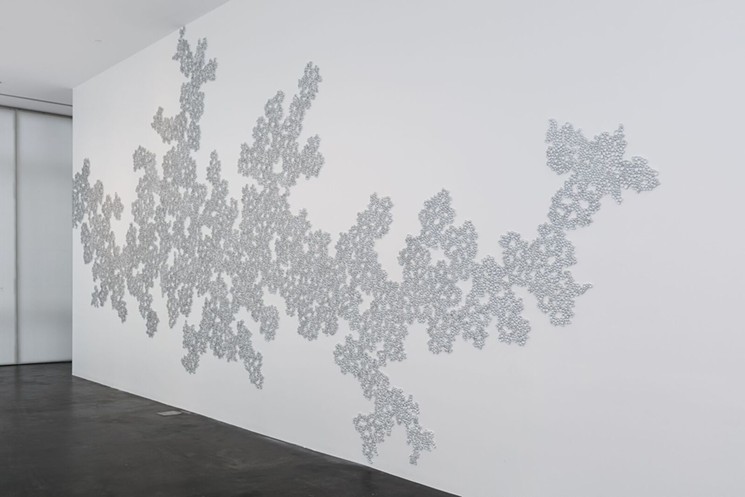 Mylar tape wall-relief by Tara Donovan.
Courtesy of the artist and Pace Gallery/photo by Wes Magyar
Though Donovan is known for site-specific installations, many included at the MCA were constructed for other places; some, however, were customized to exactly fit the galleries in which they are exhibited. “Haze,” for instance, originally done in 2003 and re-created for this show, fills the entire far wall with translucent plastic straws that have been set on end. The effect is remarkable, evocative of an all-over abstraction based on a cloudy sky while also laying out the artist’s interest in taking advantage of light and manipulating it. The conflation of aesthetic sensibilities that Donovan pulls off in “Haze” and many other pieces conjoins conceptualism, abstraction and the landscape. The piece has been created according to a set of instructions and prescribed materials (conceptualism); the stacked straws resolve into an all-over pattern (abstraction); and there’s the evocation of clouds (the landscape).

This powerful combination of aesthetic forces is even more emphatic in the magisterial “Transplanted,” in which a pile of roofing tar-paper sheets that have been roughly torn are arranged on top of a low platform. The piece looks like it could be a topographic map of the landscape or an expressionist non-objective sculpture, its deep black color eating the light. Done in 2001, it was re-created especially for the MCA exhibit. On the surrounding walls, Abrams has hung works on paper from 2008 and 2009, in which Donovan inked up broken shards of glass and put them in a press so that the paper was embossed where it connected with the glass pieces. The results look like bolts of lightning shattering the sky, which reinforces the landscape references suggested by “Transplanted.” The grouping of this installation and the unrelated works on paper is in one of the first spaces you encounter in Fieldwork, and it’s an early showstopper. 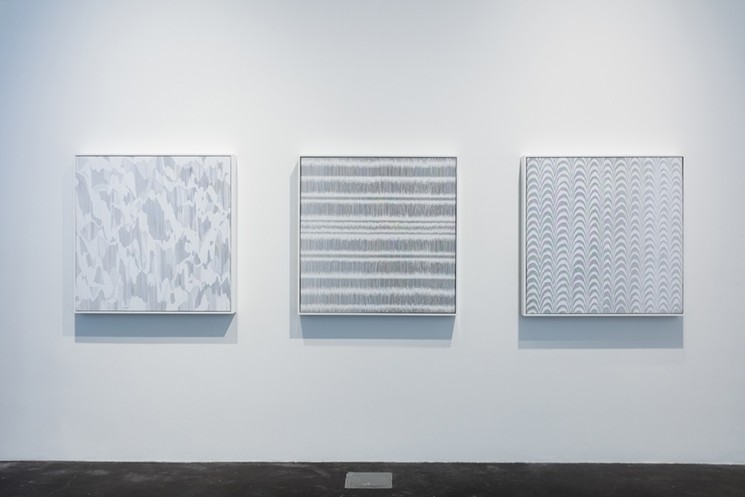 "Composition (cards)," by Tara Donovan, styrene file cards and glue.
Courtesy of the artist and Pace Gallery/photo by Wes Magyar
A number of the pieces — including the untitled mountain range originally created in 2014 and rebuilt for this show, where it’s crammed claustrophobically into a little gallery on the ground floor, and the second-floor gallery worth of formalist abstractions created last year and earlier this year — have all been made with styrene notecards. For the soaring stalagmites, Donovan subverts the rectilinearity of the cards by laying each one so that it is slightly off from the one below it. For the wall pieces, the styrene notecards are lined up on edge to convey non-objective compositions, most of them geometric. Donovan lays in the plastic cards so that there are areas of white where the card ends are, and grayish shadow tones where there are gaps between the cards. Using this dialogue of light and shadow, she suggests shapes and lays out patterns.

Similar in effect to the plastic-card wall pieces are those done with silver straight pins stuck into white boards. These works, from her “Drawing (Pins)” series done between 2009 and 2017, are reminiscent of the famous color studies by Josef Albers...except without the color. Abrams points out that the program Donovan followed at VCU was greatly influenced by the Black Mountain College approach taught by Albers in the ’30s and ’40s, in which the honest use of materials was stressed. Colorless color studies may be a witty idea, but as art objects these are totally serious — and completely successful. In order to create different shades with just pins and the light-colored grounds, Donovan uses a lot of pins to go dark and a few to go light, with gradations in between. The pin pieces anchor a set of small floor sculptures from 2017 in cleanly geometric shapes with clear plastic tubing mounted on white Corian. Because of the disappearing act pulled off by the transparent tubes seen against the white square bases, they are amazingly insubstantial. 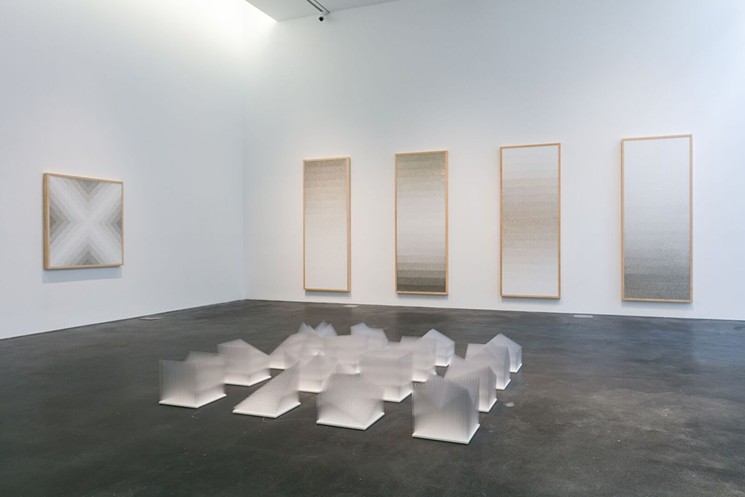 Installation view of Tara Donovan's straight pin "drawings," surrounding her transparent tube and Corian sculptures.
Courtesy of the artist and Pace Gallery/photo by Wes Magyar
Two large sculptures both seem to riff on craftiness, and are reminiscent of holiday decorations. One on the second floor, first created in 2011, is made of inverted open cones of mirror-finished Mylar collected into spheres and then built into an organic shape evocative of coral. On the lower level in the atrium is a sculptural forest of pulled-out Slinkys from 2015, surrounded by other works made of Slinkys — such as the bas-relief on the back wall — or inspired by Slinkys, including several works on paper in which the image of the Slinky is conveyed.
Tara Donovan: Fieldwork is dazzling fun. But the real revelation is how elegant the artist can make mundane things seem, from straws to notecards to Slinkys.