Before the coronavirus pandemic hit, the legendary bookstore was already planning to move from the turn-of-the-last-century Morey-Mercantile building at 1628 16th Street that it's occupied since 1994 to McGregor Square, the massive new project by Coors Field being built by Dick Monfort and the Colorado Rockies.

"The end of the mall is prime real estate, and we'd been getting below-market rent," explains Len Vlahos, who in 2017 assumed ownership of the Tattered Cover with his wife, Kristen, after training for two years with longtime owner Joyce Meskis. "We needed to find an alternative. The Rockies deal just fell into our lap."

And just in time, really. "Joyce warned us about a lot of things," says Vlahos. But wise as she is, even Meskis couldn't envision the pandemic and the subsequent shutdowns.

"Like every other indie business, this is knocking us on our butt," says Vlahos. All of the Tattered Cover stores closed on March 16, and the company has been conducting an online-only business since then. It's a booming online business, he notes, but sales are still "just a fraction of what they used to be."

Now, with Denver set to end its stay-at-home order on May 8, the Tattered Cover is planning to offer curbside pick-up at all of its stores next week. By then, the phones — which still have Meskis's voice — will have been turned back on; keeping up with online orders has been tough enough over the past few weeks. "We're very close to caught up," says Vlahos.

The stores themselves will probably reopen at the beginning of June. 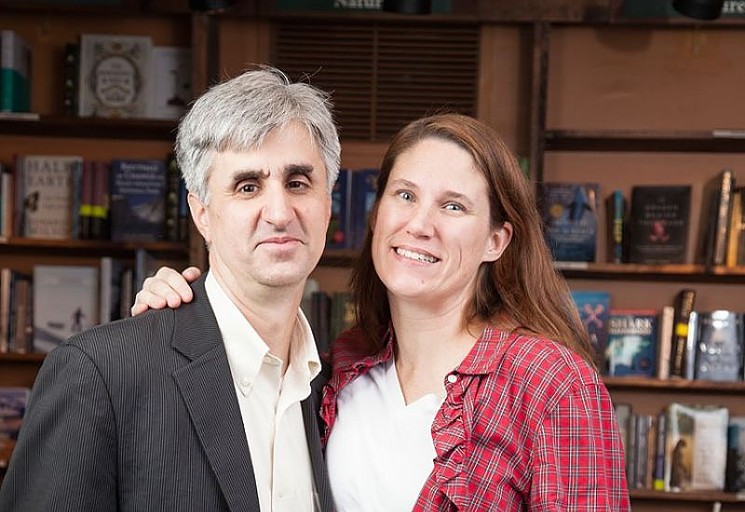 Len Vlahos and Kristen Gilligan.
Anthony Camera
Those stores got their start with a hole-in-the-wall Tattered Cover shop that opened in Cherry Creek in 1971; Meskis took the store over in 1974, and saw the business through a variety of moves, including to large and lavish digs right on First Avenue, which the store left in 2006 for the Lowenstein project on East Colfax Avenue. By then, it had added the LoDo store, which was later reduced from two floors to one, even as Tattered opened a location in Highlands Ranch (now in Aspen Grove, in Littleton), as well as an outpost in Union Station and a couple of airport franchise stores.

But the book business has seen a lot of challenges over the last decade, and recently things had gotten particularly tough in Denver, with rising rents and a higher minimum wage. Unlike other local businesses facing those challenges, a bookseller has the added obstacle of not being able to raise prices, since publishers fix the margins on books.

And so Tattered began considering options. "This deal was done directly with Dick Monfort. I don't have enough good things to say about that guy," Vlahos says. "It's an opportunity to be downtown longtimers."

And so early in 2021, Tattered will leave the mall and move a few blocks northeast, reopening in McGregor Square just in time for the next Rockies season. The new store will have about 6,000 square feet of selling space, split between two floors, as opposed to the current 9,000 square feet; there will also be an area that can accommodate events. No coffee shop, though, because McGregor Square already has plans for that.

But you can expect Charlie, the beloved statue, to make an appearance...if not at McGregor Square, then at one of the other stores. 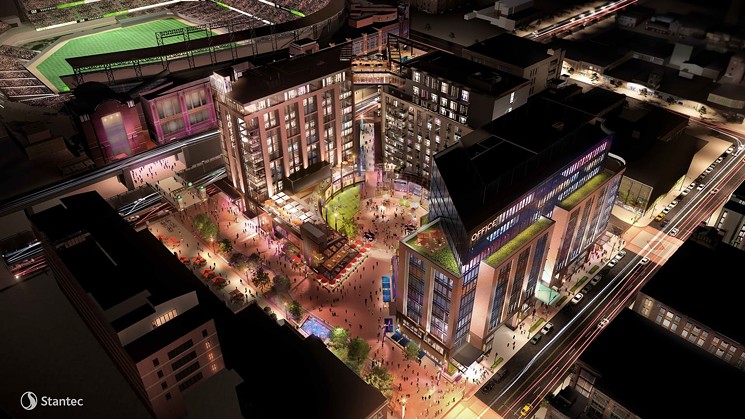 The future home of Tattered Cover.
McGregor Square
Before that next chapter, though, the Tattered Cover will need to get back to business as usual, or whatever will pass for it in the days ahead. During the shutdown, the store has seen lots of orders for plague fiction, including Emily St. John Mandel's Station Eleven; Glennan Doyle's Untamed has also been popular. And the store has gone through a lot of activity and hobby books, too.

Vlahos is an author himself; his fourth young-adult book, Hard Wired, was supposed to come out last month, but now its release has been moved to July. During the pandemic, his own reading has "gone in some weird directions," he says. He's listened to The Hitchhiker's Guide to the Galaxy, read some science fiction, and is now making his way through Winter Wars, a historic look at the country when FDR was elected.

Times were tough then, just as they are now. Even before the pandemic, Vlahos admits, running the Tattered Cover has been the "most rewarding thing I've ever done, and by far the most stressful."

Now, he says, "I'm ready to get on with the next chapter."
KEEP WESTWORD FREE... Since we started Westword, it has been defined as the free, independent voice of Denver, and we'd like to keep it that way. With local media under siege, it's more important than ever for us to rally support behind funding our local journalism. You can help by participating in our "I Support" program, allowing us to keep offering readers access to our incisive coverage of local news, food and culture with no paywalls.
Make a one-time donation today for as little as $1.