See new collage works by Hardly Soft at Dateline. Courtesy of Hardly Soft
This First Friday weekend, you can have art your way: outdoors, indoors, with poetry, with robots, from your car window, with an art-walk hoopla and a dizzying array of styles, techniques and mediums. Enjoy it while you can (and bring your masks along), because no one knows what might be around the corner. Here are twenty ways to get your art on in metro Denver:

Steven Frost, Liberace in Purgatory
The Storeroom, 1700 Vine Street
Through October 10
Boulder fiber artist Steven Frost participated last fall in the collaborative immersive Halloween experience No Place to Go, which expressed the fearful path the nonbinary must travel in the everyday world, with a metaphorical, queer view of what’s scary. Frost’s inspired performance installation, Liberace in Purgatory, included a forest of candelabras overseen by the glittery showman’s ectoplasmic figure at a grand piano. For his turn at the Storeroom window gallery, Frost resurrected elements from No Place to Go for a second look that’s sure to make a splash for drive-by art viewers. As Liberace once said, “I don't give concerts. I put on a show.”

Meghan Wilbar, Changing Light
Meghan’s Book Project
Michael Warren Contemporary, 760 Santa Fe Drive
Through August 28
Opening Reception: Thursday August 5, 5 to 8 p.m.
Artist Meghan Wilbar takes over Michael Warren in August with a solo exhibition of paintings and mixed-media renderings that begin as plein-air landscapes, sensitive to changes in the light. In the project space, Wilbar presents a collaborative art-book project that involved participation by mail, with a group of eight artists who directly shared drawings with her on the pages of handmade books. In addition to the completed books, works by the eight — Malado Baldwin, Heather Frankland, Dan Levinson, Gloria Naccarato, Margaret Noel, Susan Siegel, Lafiya Watson Ramirez and Megan Williamson — will be included in the show.

Have a seat with assemblage artist Deborah Jang, a resident artist at No Vacancy.
Deborah Jang
Deborah Jang, From Where I Sit
Thursday, August 5, 6 to 9 p.m.; poetry hour, 7 p.m.
Open mic sign-up
Friday, August 6, 6 to 9 p.m.
No Vacancy, 3722 Chestnut Place
The RiNo artist residency No Vacancy continues to show new work by the current wave of artists occupying the warehouse space, including From Where I Sit, a complete exhibition by assemblage artist Deborah Jang, who’s come up with several clever and lovely chair sculptures built from found objects. Since Jang, the author of Float True, is also a poet, the Thursday-night opening includes a poetry hour with an open mic with Suzi Q. Smith and host Franklin Cruz. The tie-in? Poets are invited to sit in one of Jang’s fanciful chairs to read. No Vacancy is also hosting a First Friday open house, so you can see new projects by Jang’s studio mates and enjoy brews from Ratio Beerworks. RSVP online at Eventbrite. Ramiro Smith Estrada, “My dream is to become hopeless,” 2020, oil on canvas. At Understudy through August 29.
Ramiro Smith Estrada
Ramiro Smith Estrada, Bliss Is Not a Happy Thing
Understudy, 890C 14th Avenue
August 6 through August 29
Opening Reception: Friday, August 6, 6 to 9 p.m.
Argentinian painter Ramiro Smith Estrada’s latest series of ironic portraits to pop up in Denver are inspired by the equally ironic dialogue between the Seinfeld characters Elaine Benes and George Costanza. Their continuing string of tête-à-tête conversations, as well as the show itself, consumed the artist’s attention during COVID confinement, eventually pointing out to him the parallel irony of having come through the pandemic storm without finding any great social transformation. Instead, Estrada sees mankind’s plight as anticlimactic. As Costanza once emoted, he notes, “My dream is to become hopeless.” Touché.

Javier Badel
Threads: Migration Connects Us All
Tropicalismo Mágico
BRDG Project, 1553 Platte Street
August 6 through August 28
Opening Reception: Friday, August 6, 6 to 9 p.m.
The BRDG Project not only tackles immigration by offering shelter to PlatteForum (itself in a state of migration to a new space) for the exhibition Threads: Migration Connects Us All, a huge project involving the participation of thirty artists who’ve lived the immigrant experience, but also opens its own immigration show, Tropicalismo Mágico. Threads curators Esther Hernandez and Eriko Tsogo have put together a big, multidisciplinary display of visual, multimedia and performative elements, while Tropicalismo Mágico brings immigration down to the basic human level by showcasing work by Javier Badell and Juan Esteban Usubillaga, both Venezuelans now living in Colorado; together, the shows bring folks of all persuasions together.

Who doesn't love robots? Catch I ROBOT at Access Gallery.
Courtesy of Access Gallery
I ROBOT
Access Gallery, 909 Santa Fe Drive
August 6 through September 3
First Friday Reception: Friday, August 6, 4 to 8 p.m.
Meet the Artist Reception: Friday, August 20, 4 to 8 p.m.
Closing Reception: Friday, September 3, 4 to 8 p.m.
Over on Santa Fe Drive, where First Fridays have finally gone live again, the nonprofit Access Gallery (where young people with disabilities receive job-training skills through art experiences) will celebrate the seventieth anniversary of Isaac Asimov’s classic sci-fi short-story collection I, Robot with an art exhibition of the same name. Promised are paintings and sculptures of robots, a sideshow of BFF Fashion Icons by Skylar K. in the studio space, and even art made by actual robots. And who doesn’t love robots?

Courtesy of 40 West
Colfax Art Crawl and 40 West Arts Ten-Year Anniversary Street Party
1560 Teller Street, 1560 West Colfax Avenue, Lakewood
Friday, August 6, 6 to 9 p.m.
It seems like just yesterday that the 40 West Arts District reared its head along the West Colfax corridor in Lakewood, but in fact it’s been ten years since a small celebration at the Rocky Mountain College of Art+Design welcomed the new designation. Since then, it’s become home to several displaced metro-area artist co-ops, created the 40 West ArtLine walking and biking trail running by murals and other public art, and beefed up First Friday with the Colfax Art Crawl — among other things. Anniversary festivities begin when the Handsome Little Devils sideshow performers kick off their street parade through the district at 6 p.m. at Mint & Serif; throughout the evening, follow the map to find art openings, hands-on craft stations, a live-music stage and food trucks.

Catherine Carilli, “Bird,” acrylic on canvas.
Catherine Carilli
CL Seving, The Art of Letting Go
Catherine Carilli, Forever Summer
Dreams and Visions
Next Gallery, Art Hub, 6851 West Colfax Avenue, Lakewood
August 6 through August 22
Opening Reception: Friday, August 6, 6 to 10 p.m.
In the midst of 40 West’s anniversary fun, you’ll find lots of new co-op shows at the Art Hub, including some that opened a week ago. Next Gallery is hosting an opening for members Christy Seving (on the forces of nature) and Catherine Carilli (considering the soul of summertime), along with Dreams and Visions, a group exhibition concerned with exactly that, in the community gallery. 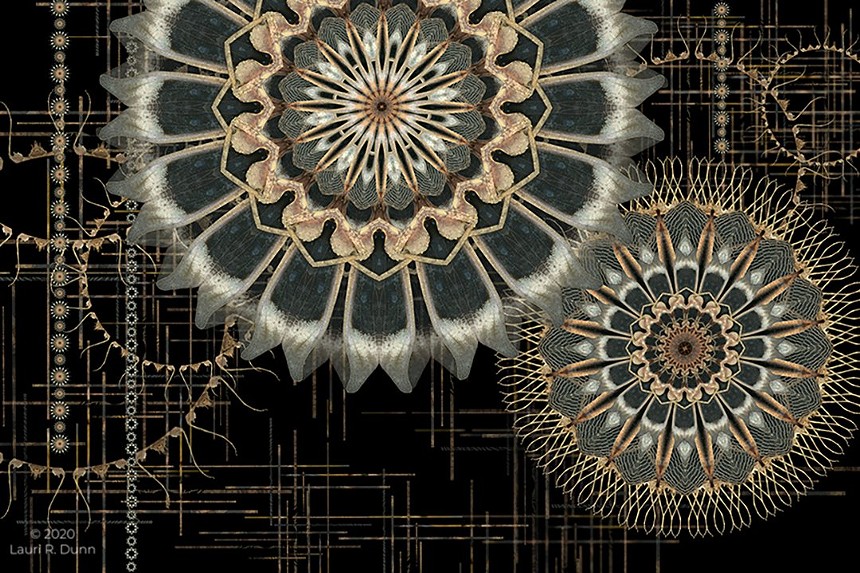 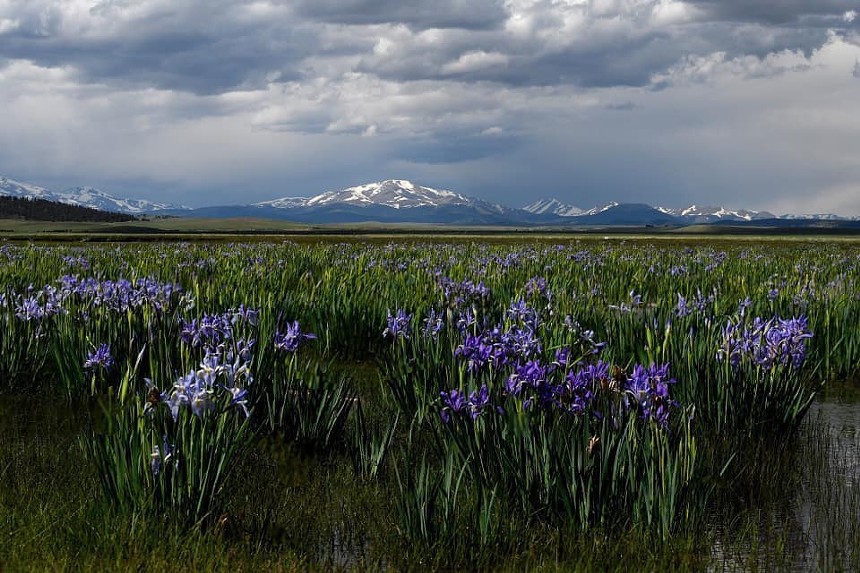 Tony Eitzel, “Wetlands and Wild Iris.”
Tony Eitzel, Gallery 6
Gallery 6 Grand Opening
Gallery 6, 2434 East Sixth Avenue
Friday, August 6, 5 to 9 p.m.
Gallery 6 officially opened in February, but with the return of gallery exhibitions in general, the team behind the photography gallery, photographers themselves, are celebrating at a grand opening with new prints on view. Anthony Garcia Sr., “Cuban Links,” acrylic on canvas.
Courtesy of Anthony Garcia, Sr.
Anthony Garcia, Sr., Subtle Transitions
Alto Gallery, 4345 West 41st Avenue
Opening Reception: Saturday, August 7, 6 to 10 p.m.
Alto Gallery goes back to its roots as a project of the Birdseed Collective with a show by Birdseed founder Anthony Garcia, Sr. Garcia is known for his striped canvases and murals originally inspired by Mexican serape patterns; these days, they’ve become more sophisticated, in the footsteps of Gene Davis. The word on the street is that Alto will be on the move from Tennyson Street after Garcia’s show closes, giving you one more reason to drop in at the opening. Michelle Lamb, “Cygnus II,” found-object assemblage.
Michelle Lamb
Sculpture in the Park Show & Sale
Benson Sculpture Garden, 2908 Aspen Drive, Loveland
Saturday, August 7, 9:30 a.m. to 6 p.m.
Sunday, August 8, 9:30 a.m. to 4:30 p.m.
Sculpture in the Park, Loveland’s annual display of work by more than 150 sculptors, both local and national, is the largest outdoor juried sculpture show in the country. But it also serves a local purpose: upkeep and the purchase of new permanent works in the town’s Benson Sculpture Garden. If nothing else, it’s a beautiful way to spend some time outdoors in a natural setting.