Grace Kennison, “Flags,” at Union Hall Gallery. Grace Kennison
New exhibitions keep popping up around town, all showing the human touch. You can see genius at work in two displays at MCA Denver, pan-Asian artists fighting for individuality and respect at RedLine, and a group show by and for the millennial mindset at Union Hall.

J.R.’s artivist photo-booth truck will pass through Colorado to snap portraits in support of immigrants, Ana María Hernando is raising up women’s work in fiber installations, and other themes and visuals will be popping up in the name of community everywhere.

Here are just some of the great shows to catch now:

Jason Abrams, “Samson.”
Jason Abrams
Chain Letter
Union Hall, the Coloradan, 1750 Wewatta Street, Suite 144
September 9 through November 6
Opening Reception: Thursday, September 9, 6 to 8 p.m.
Union Hall continues to spin interesting concept exhibitions with Colorado ties and community touchpoints. In Chain Letter, put together by Denver-based artist Alexander Richard Wilson and Union Hall chief curator Ari Myers, the spotlight is on the millennial view of life in America on the twentieth anniversary of 9/11. It’s a fresh view, tied together by new ideas on how to save the world without exerting the unconscionable powers of weaponry, out-of-control capitalism, cyberbullying and energy dinosaurs. The seven participating artists hail from across the country, but more than half of them currently live here in Denver.

Inside Out Project Photo-Booth Truck
Center for Visual Art MSUD, 965 Santa Fe Drive
Thursday, September 9, 10 a.m. to 4 p.m.
Rino ArtPark, 1900 35th Street
Friday, September 10, 10 a.m. to 4 p.m.
Chipper's Lanes, 830 North College Avenue, Fort Collin
Sunday, September 12, 10 a.m. to 4 p.m.
The street artist J.R. established the national Inside Out Project in 2011; since then, the participatory group has been traveling the world, photographing and wheat-pasting the black-and-white images of faces in public places, all in the name of personal identity and world causes. The project’s photo-booth truck will be swinging through Colorado this week, highlighting the plight of immigrants, DACA students and other resilient marginalized groups in transition. You’re invited to drop by and be part of the worldwide story as a player or supporter.

Matt Barton, Community Forms, 2021, concrete, formed earth, recycled materials, landscaping.
Photo by Third Dune Productions. Courtesy of the artist and Black Cube
Community Forms Pool Party
Taxi Pool, 3457 Ringsby Court
Thursday, September 9, 4 to 7 p.m.
Here’s another chance to check out Matt Barton’s concrete outdoor installation Community Forms, a work that does double duty as a stormwater mitigation project and a playscape for bikes and skateboarders. Although it debuted in May, the project-supporting Black Cube Nomadic Art Museum saw an opportunity to add swimming to the installation’s recreational side by hosting a swim party at the adjacent Taxi pool, with the artist present. DJ tunes, snacks and beverages will fill out the afternoon. It’s BYO towel, skateboard or bike, natch. 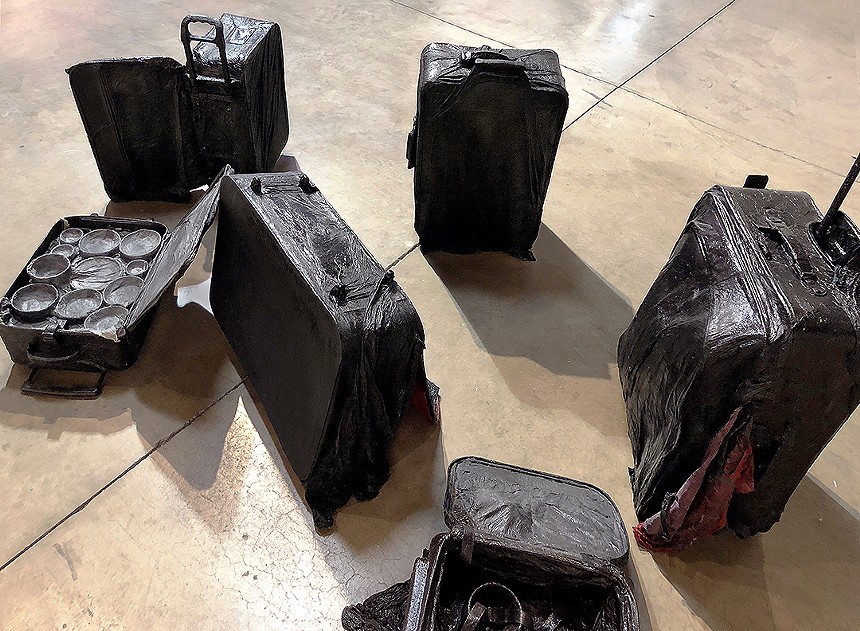 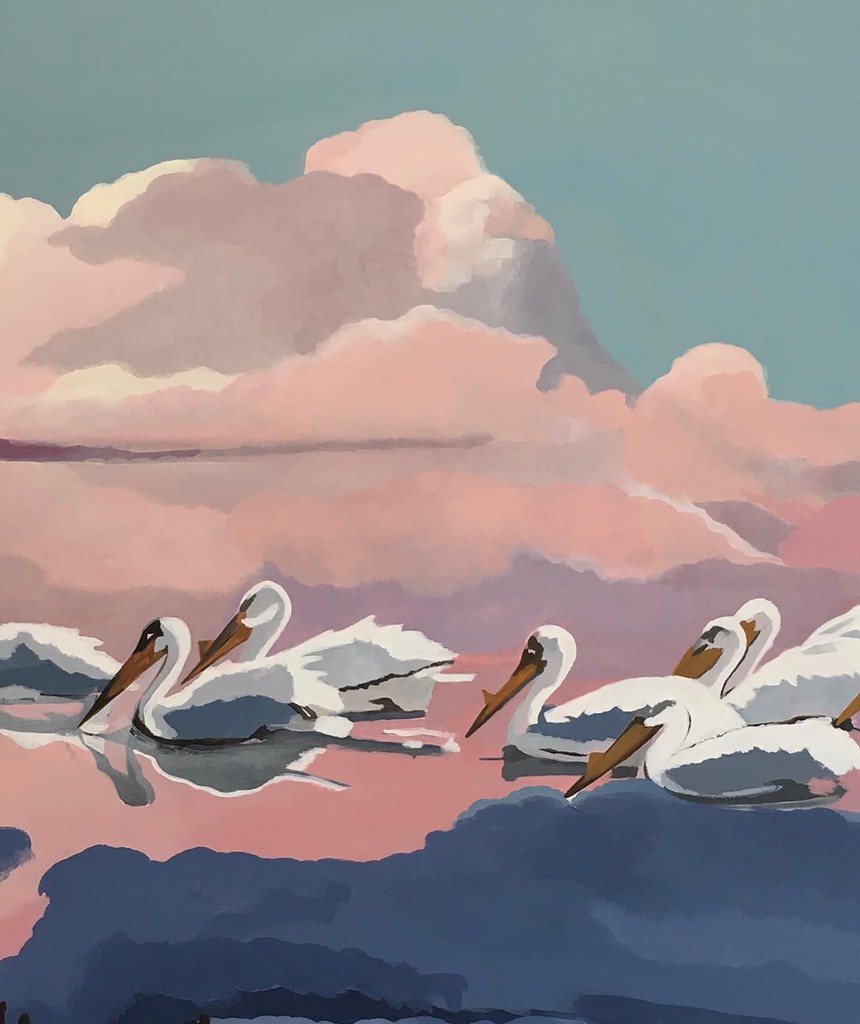 Ana María Hernando, “Ñustapac urpichakuna/Pájaros para la Ñusta/Birds for the Ñusta” (detail), 2020, mixed media.
Ana María Hernando, courtesy of Robischon Gallery
Ana María Hernando, Fervor
Freyer–Newman Center, Denver Botanic Gardens, 1007 York Street
September 11 through January 2
Artist Talk: Saturday, September 18, 1 to 2 p.m., $7 to $15 in person, $7 to $10 online
The roots of Ana María Hernando’s beautiful piecework installations lie in her memories of women gathering to create functional fiber handwork together, such as delicate sewing, knitting and embroidering. It’s the obvious heart of Fervor, which brings all these elements together in clouds of tulle and embroidered flowers. In addition to her live and online artist talk on September 11, Hernando’s film Ana María Hernando; Undomesticated will be shared on both October 2 and November 7 (the second event includes a Q&A session).

Play with Liz Quan's porcelain sculptures at Understudy.
Liz Quan
Liz Quan, Shape | Space | Play
Understudy, 890 C 14th Street
Through September 26
Opening Reception: Saturday, September 11, 6 to 9 p.m.
Each individual piece of Liz Quan’s sculptural work, formed from multiple porcelain chips, bone-like beads and organic shapes, takes on a life of its own on a flat surface or hung on a wall. In multiples, they invite viewers to touch and rearrange them. Meet Quan at the reception, or walk in Thursdays through Sundays from noon to 6 p.m. during the show’s run.

Yard Art is back for a final weekend in the sun.
Courtesy of Annie DeCamp
Yard Art Vol 3.0!
1002 Detroit Street
Saturday, September 11, 10 a.m. to 5 p.m.
Sunday, September 12, 11 a.m. to 3 p.m.
The band of artists behind Yard Art — a big outdoor art sale of quality work — are back with a third and final event in the Congress Park neighborhood.

Art on the Green and Women of Steele Neighborhood Studio Tour
Curtis Park, 2200 East Orchard Road, Greenwood Village
Saturday and Sunday, September 11 and 12, 10 a.m. to 5 p.m. daily
The Curtis Center for the Arts brings back Art on the Green, an outdoor fest in the adjacent Curtis Park powered by an all-Colorado roster of eighty artists in a variety of media. The art show happens in tandem with the seventh annual Women of Steele Neighborhood Studio Tour, an open studio event. Catch a shuttle at Art on the Green and visit five studios to see and buy additional artworks by resident and guest artists.

Interested in having your event appear in this calendar? Send the details to editorial@westword.com.
KEEP WESTWORD FREE... Since we started Westword, it has been defined as the free, independent voice of Denver, and we'd like to keep it that way. With local media under siege, it's more important than ever for us to rally support behind funding our local journalism. You can help by participating in our "I Support" program, allowing us to keep offering readers access to our incisive coverage of local news, food and culture with no paywalls.
Make a one-time donation today for as little as $1.