Vendor at Atlanta's ThriftCon. Joel Delgado w/ Panoptic Productions
ThriftCon is back in Denver! Join other vintage enthusiasts this Sunday, April 24, from 10 a.m. to 5 p.m. at the National Western Complex. Now in its third year, ThiftCon has become one of the largest vintage and collectible retail experiences in Denver, with vendors from around the nation gathering for a one-day celebration of sustainable fashion.

Two years before co-founders Mario Conte and Ken Meade founded ThriftCon in 2018, they created a streetwear store on Welton Street called Station, selling brands from Supreme to Tommy Hilfiger. “[Station] was our space. We started gathering a following and cultivating this vibe and culture,” says Conte. 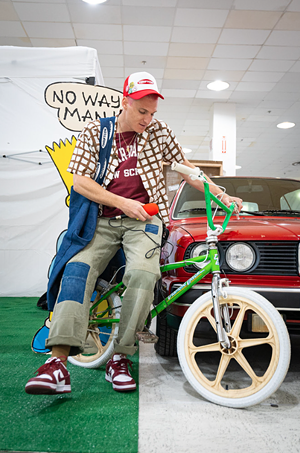 With such a large following, the founders have expanded the concept; ThriftCons are now held in cities ranging from Houston, to Atlanta and Philadelphia. “ThriftCon evolves from city to city. In no city is ThriftCon ever the same,” says Meade, noting that each city brings its own unique vendors. “We really just let that city and that energy of the moment kind of define what that specific event becomes."

The values and goals are uniform, though. When looking for vendors and pricing tickets, ThriftCon wants to remain accessible to the public. “Pretty much anyone with a store and idea can vend, and anyone can attend,” says Meade. He and Conte also want people to leave the convention educated on the benefits of secondhand shopping.

“There's such a surplus of clothing circulating the world and being produced every day. We are trying to destigmatize secondhand shopping,” Conte says.

ThiftCon helps people create not only outfits, but connections: People trade and swap items along with stories.

“It really has become a celebration of all things vintage, '' says Conte. He highlights the sentimental value that vintage clothing can bring to any individual, and adds that ThriftCon is a place to share that and find new friends by building community.

“It is a unique opportunity for a lot of people to mix together and find the connection you won't find in your immediate circle,” Meade notes. Atlanta ThriftCon Event
Joel Delgado w/ Panoptic Productions
Looking ahead, ThriftCon hopes to expand more across the country. The focus is on growing the already established connections here in Denver and having a greater media presence in the vintage world.

Playing around with the idea of a three-day festival, Conte and Meade hope to create a larger event with a carnival and different activities, along with their usual vendors.

“There really is something for everyone at ThriftCon,” Meade says.

ThriftCon, 10 a.m. to 5 p.m. Sunday, April 24, at the National Western Complex, 4655 Humboldt Street. Tickets are $10 for general admission, $30 for early entry. Learn more at ThriftCon’s website.
KEEP WESTWORD FREE... Since we started Westword, it has been defined as the free, independent voice of Denver, and we'd like to keep it that way. With local media under siege, it's more important than ever for us to rally support behind funding our local journalism. You can help by participating in our "I Support" program, allowing us to keep offering readers access to our incisive coverage of local news, food and culture with no paywalls.
Make a one-time donation today for as little as $1.