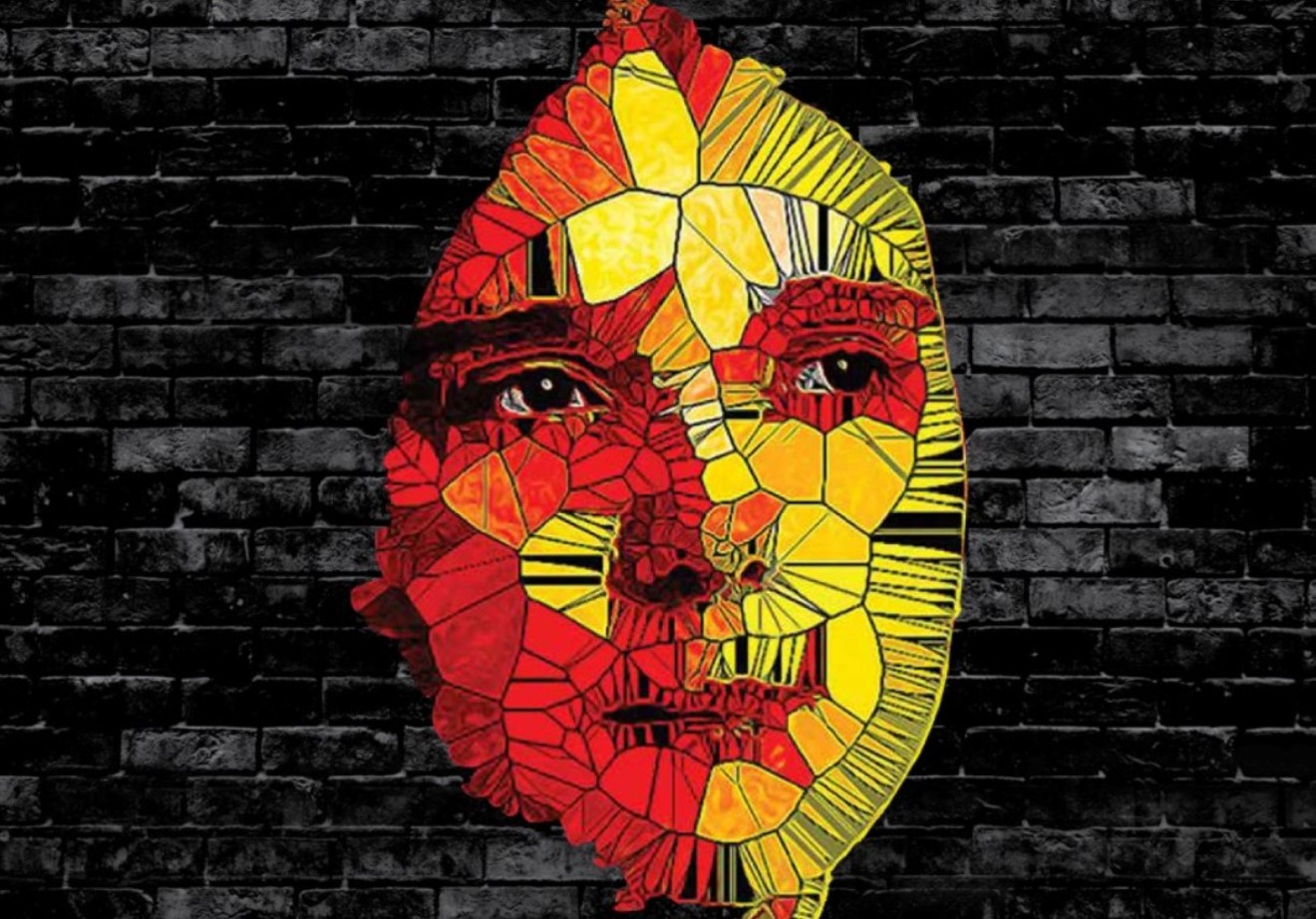 One of the visual images in "Shattered: Symbolic Gesture," inspired by Ukraine. Oana Maria Cajal
When Ukraine was invaded by Russia in February, one of the responses from the artistic and activist community came from John Freedman, theater critic for the Moscow Times from 1992 until 2015. Freedman had the idea to compile a database of contemporary plays by Ukrainian playwrights, translate many into English and make that material available to theater and theater artists all over the world. Since then, the Worldwide Ukrainian Play Readings have been popping up all over the globe in protest of the war. Professor and Romanian-American poet Cristina A. Bejan (whose book Green Horses on the Walls was an Indie Finalist in 2021) is now bringing that movement to Denver.

“When that got going in the spring,” Bejan recalls, “I was thinking that I’d love to bring that to Denver somehow.” It was through her work teaching at Metro State that she realized she had the opportunity not only to make that a reality, but to give her students a chance to participate. Students from her Staging Cultures: Theater, Drama, and Multiculturalism class have played an instrumental part in making the showcase a reality.

The Ukraine + Freedom Arts Showcase will take place on the Auraria campus in the Arts Building, Studio Theater 271, at 6:30 p.m. on Thursday, December 15. The event is free, but donations are suggested for Ukraine relief organizations, some of which will be listed in the printed program. There will also be Ukrainian baked goods (doughnuts and pyrizhky) from Ukrainian refugees Sergei and Vira Chetverikov. The show also marks the first live and in-person event produced by Bucharest Inside the Beltway since its move last year to Denver from Washington, D.C.

“It’s a big deal,” explains Bejan, “because this is Colorado’s first performance of the Worldwide Ukrainian Play Readings. They’ve been absolutely everywhere else, but this is the first time it will be done in Colorado. So that’s exciting.”

The show itself, which Bejan points out is “more an experience than anything,” will start with three live, concert-style stage readings from Ukrainian plays, as well as three that will be presented via Zoom. The plays from which the readings are chosen are contemporary and focused on the ongoing war, and include How to Talk to the Dead, by Anastasiia Kosodii; Personnel Carrier, by Oksana Grytsenko; What Is War?, by Andriy Bondarenko; A Sense of War, by Julia Gonchar; Pussycat for Memories, by Neda Nejdana; and Dictionary of Emotions, by Elena Astaseva.

“Definitely hard to hear, some of it,” admits Bejan, “but important for us all to experience. It’s a window into life that we don’t get from normal media. And it’s art.”

The second part of the showcase is called Shattered: Symbolic Gesture, a combination of live and video poetry set against a visual medium inspired by Ukraine. Often an exhibition piece all by itself, it’s the brainchild of Romanian playwright and artist Oana Maria Cajal, who now lives and works in Montreal. Shattered has already played in Italy and Romania, and this performance will mark its debut in the United States. 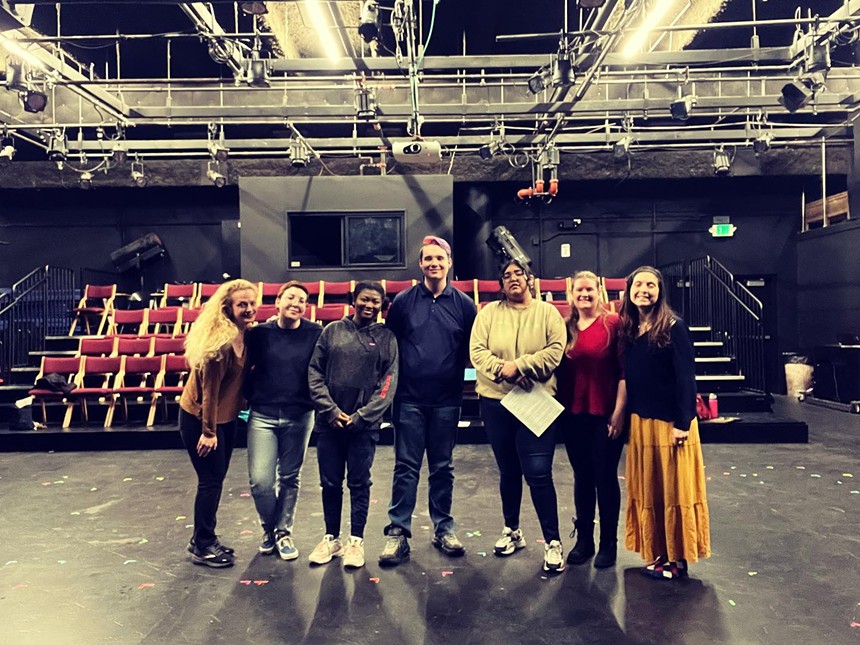 Students in Bejan's MSU class are part of the Ukraine + Freedom Arts Showcase
Cristina Bejan
Lastly, the showcase will include the work of MSU students on the subject of freedom — not just in Ukraine, but in all places and experiences. “It was very important to me that this wasn’t just a Ukraine event, but that it’s about struggles for freedom everywhere," says Bejan. "So students were invited to contribute something from in their wheelhouse, something they’re passionate about. I have an Iranian-American student who has created a video slideshow of photographs of the victims who have been killed in the freedom protests in Iran. I have an expert violinist who will perform a classical piece from Ukraine. There’s a student who’ll be presenting a Black Lives Matter poem by James Brunt. I have some students who participated through visual art that you’ll see walking into the theater. And it all culminates in an incredible video from one of my students combining newsreels from all over the world, all of it focusing not on the tragic, but on how we stand up to it. Those are intercut with MSU students talking about freedom and what it means. It’s so powerful."

“I don’t believe in long shows,” laughs Bejan. “I know this sounds like a lot, but the showcase itself shouldn’t last longer than an hour and fifteen minutes.”

At the same time, Bejan stresses the importance of this show’s message, and the meaning of the “plus” sign in the title: While it uses Ukraine as a focus, it’s really a celebration of freedom everywhere.

“My father escaped communist Romania; both his parents were imprisoned by the Communist regime and disappeared. So I could relate to tales of Russian oppression, but I could also see it from the activist perspective — that people just want to be free everywhere. That’s where my students were getting it. It’s ultimately what we should be talking about," concludes Bejan.

"When you tap into that universal need for freedom, that’s what unites us as human beings.”

The Ukraine+ Freedom Arts Showcase, 6:30 p.m. Thursday, December 15, Auraria campus, Arts 271 Studio Theatre, 855 Lawrence Way. The event is free; for more information, see the event website.
KEEP WESTWORD FREE... Since we started Westword, it has been defined as the free, independent voice of Denver, and we'd like to keep it that way. With local media under siege, it's more important than ever for us to rally support behind funding our local journalism. You can help by participating in our "I Support" program, allowing us to keep offering readers access to our incisive coverage of local news, food and culture with no paywalls.
Make a one-time donation today for as little as $1.