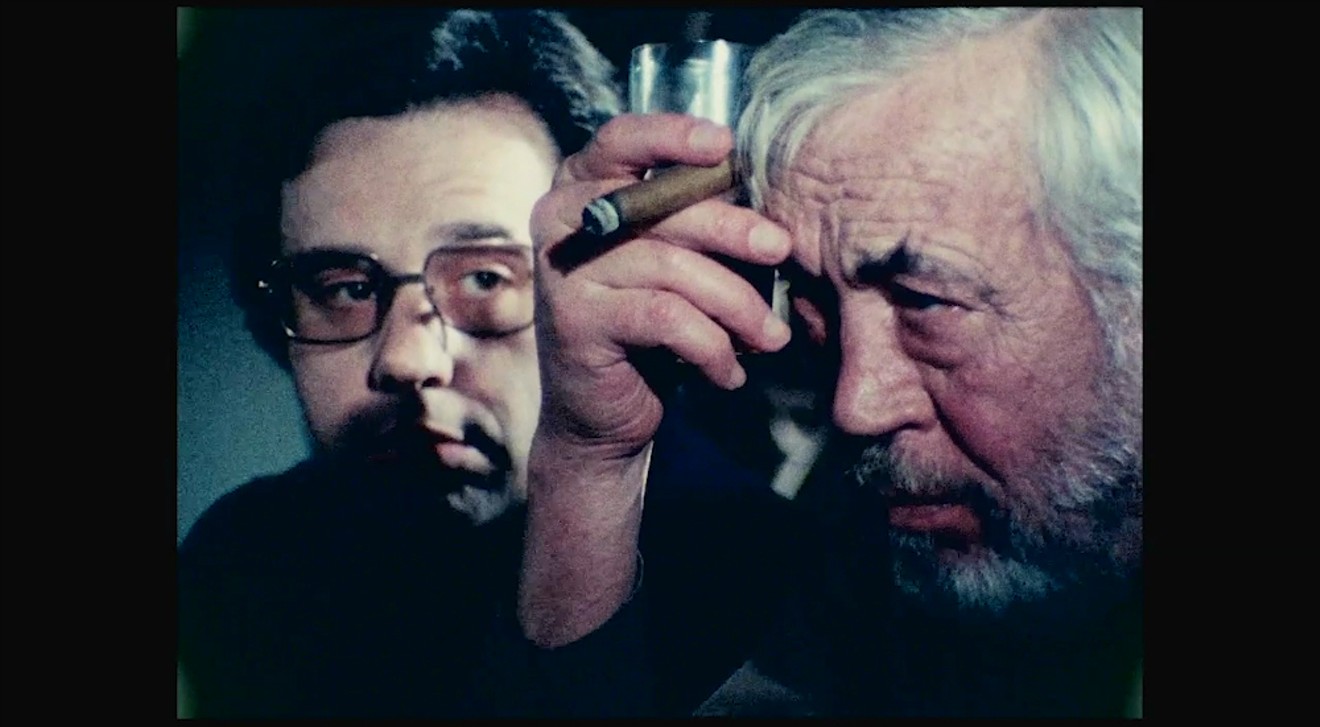 Forty-seven years after its first day of filming, Orson Welles’s The Other Side of the Wind hits theaters and Netflix on November 2. While critics will pant with curious glee, it’s hard to imagine the average Joe lasting more than ten minutes with Welles’s long-lost project, a film-within-a-film-within-a-film. Welles’s idea was to present Wind as a reconstruction of recently discovered documentary footage of director Jake Hannaford (John Huston) attempting to show his own unfinished movie to his guests; it’s perhaps the first “found footage” movie ever made. The notion of Welles inadvertently begetting Cannibal Holocaust and The Blair Witch Project is far more delicious than anything presented in this 122-minute edit of his last film.

Regardless, there’s merit to be found in The Other Side of the Wind. From a visual perspective, it is pure Orson. His meticulous handiwork is evident in the framing and composition, both in the black-and-white footage that constitutes the ersatz documentary footage and the color scenes that represent Hannaford’s movie. The placement of his actors and his camera create image patterns that beg to be deconstructed and discussed: Welles’s use of reflections in a phone booth in one scene is particularly striking, as are the numerous ways he finds to cram as many bodies as he can into his party sequences. There’s a fun “spot the actor-director” vibe to the latter, which features real people like Claude Chabrol intermingling with other directors who are themselves playing characters. Welles’s camera also gets daringly close to his actors, forcing them to reveal more of themselves than usual to the audience.

The images recall the master’s most celebrated work, but the editing — the current cut was assembled recently — is often jarringly misjudged and unlike Welles. This presents an interesting dichotomy that will intrigue cinephiles. Despite being built based on Welles’s notes and the input of people who were in front of and behind the camera on set, this The Other Side of the Wind has a haphazard “Well, he shot it, so we'd better include it” vibe.There’s a tight, 80-minute feature trapped in The Other Side of the Wind, one that Welles would most likely have exhumed had rights issues and his own stubbornness allowed him to finish the film before his death.

The Other Side of the Wind is the name of Hannaford’s film, the one he is showing to his Hollywood guests, who include a strikingly handsome, young Peter Bogdanovich as Hannaford’s protégé and Susan Strasberg as a pushy reporter based on Pauline Kael. Hannaford’s framework story has a touch of Luis Buñuel’s The Discreet Charm of the Bourgeoisie — his screening is constantly interrupted by power outages and other absurdities. His viewers are a motley crew of hangers-on and hatchet men (or hatchet women, to be more precise), and Hannaford implies that this will be the last party he ever throws. The viewer is privy to the veracity of this statement; Welles begins his story with the report that Hannaford is dead.

Adding to the surrealism is Oja Kodar, Welles’s companion at the time of filming. She’s the only person to visually appear in both the “documentary” footage and the film within the film. Though of Croatian descent, Kodar plays a Native American actress who is neither given a name nor a line of dialogue. Hannaford and others refer to her as if they’re talking about her at a Donald Trump rally, calling her every Indian name in the book, from Pocahontas to Minnehaha. It’s a bit hard to take, though it must be noted that this footage was shot in an era when racial slurs were used in movie titles with impunity. As the actress, Kodar is tasked with evoking some kind of mystery-slash-muse vibe but she comes off as preternaturally vapid.

None of this makes one lick of sense, and there’s more than one scene that supports a theory that Hannaford (and, by extension, Welles) nursed bisexual tendencies. Best to leave that one to the experts. The Other Side of the Wind is more fun just to look at than to search for any meaning. However, Netflix does offer a bit of analytical help by pairing it with Morgan Neville’s entertaining 2018 documentary They’ll Love Me When I’m Dead. The documentary covers the making of Welles’s film, not its reconstruction, and features interviews with a much older Bogdanovich and recordings of Kodar, who points out that “I brought the sex to this movie.” Welles appears on screen talking about how all great films are happy accidents and all, but admitting that he knew he was as full of shit as the movie that resulted.
KEEP WESTWORD FREE... Since we started Westword, it has been defined as the free, independent voice of Denver, and we'd like to keep it that way. With local media under siege, it's more important than ever for us to rally support behind funding our local journalism. You can help by participating in our "I Support" program, allowing us to keep offering readers access to our incisive coverage of local news, food and culture with no paywalls.
Make a one-time donation today for as little as $1.