The legal marijuana industry's recycling options are limited because of the plant's tight regulation. Jacqueline Collins
Over 150 million tons of waste are produced by the cannabis industry per year, according to O’Neil Rudolph, a Denver native making moves on the sustainable side of the plant.

“That number just grows every single year it's calculated, which is really unfortunate,” she says. “I think one of the biggest issues is that all of that waste that's accumulated really goes to the landfill, when a lot of it is recyclable, compostable or even reusable, and dispensaries don't have a direct system to actually sustainably dispose of that waste.”

Rudolph, who now lives in California, has been working to create a system that incentivizes recycling at dispensaries with an easy path to get involved. Her soon-to-launch company, Cannachange, will do that in Colorado and beyond.

Shoppers using Cannachange will be able to download and utilize the app on their phones, allowing them to track purchases at participating dispensaries and earn points for shopping credit. Customers who shop with a recyclable bag or return recyclable cannabis packaging to dispensaries will earn one point, with 25 Cannachange points garnering a $5 dispensary credit. 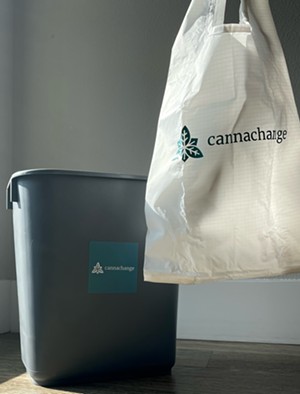 Dispensaries and consumers set up profiles within the app and receive scannable QR codes to track purchases and points; consumers will be able to locate partnering dispensaries in nearby areas and track the total packaging waste they've saved, Rudolph adds.

The amount of cannabis industry packaging waste varies from state to state, Rudolph says, with regulatory factors playing a key role. However, states earlier to cannabis legalization, like Colorado and Oregon, have implemented recycling programs for pot product packaging.

In Colorado, for example, dispensaries can place packaging receptacles in their lobbies and retail areas, and can now accept packages bought from other stores after recent rulemaking.


Despite the new rules, the CDPHE has admitted that getting dispensaries to adopt the new environmental practices has been challenging. However, Rudolph believes shoppers value a slice of sustainability with their cannabis, and hopes that consumer desire will be enough of an incentive for more dispensaries to add a Cannachange bin.

“There is a large crossover between people who are interested in cannabis and then sustainability,” she says.

Colorado dispensaries are allowed to take back and reuse retail cannabis packages as long as they are properly cleaned first. Packaging made of glass, plastic, cardboard, paper and aluminum will be accepted through Cannachange, according to Rudolph. The only items that won't be accepted are vape pens and cartridges, which can't be recycled.


Rudolph has currently locked in partnerships with 27 dispensaries in Colorado, Oregon, Washington and California, with plans to launch on February 25. She declines to name the first wave of partnering stores in Colorado, but says they are located in the Denver area.
KEEP WESTWORD FREE... Since we started Westword, it has been defined as the free, independent voice of Denver, and we'd like to keep it that way. With local media under siege, it's more important than ever for us to rally support behind funding our local journalism. You can help by participating in our "I Support" program, allowing us to keep offering readers access to our incisive coverage of local news, food and culture with no paywalls.
Make a one-time donation today for as little as $1.