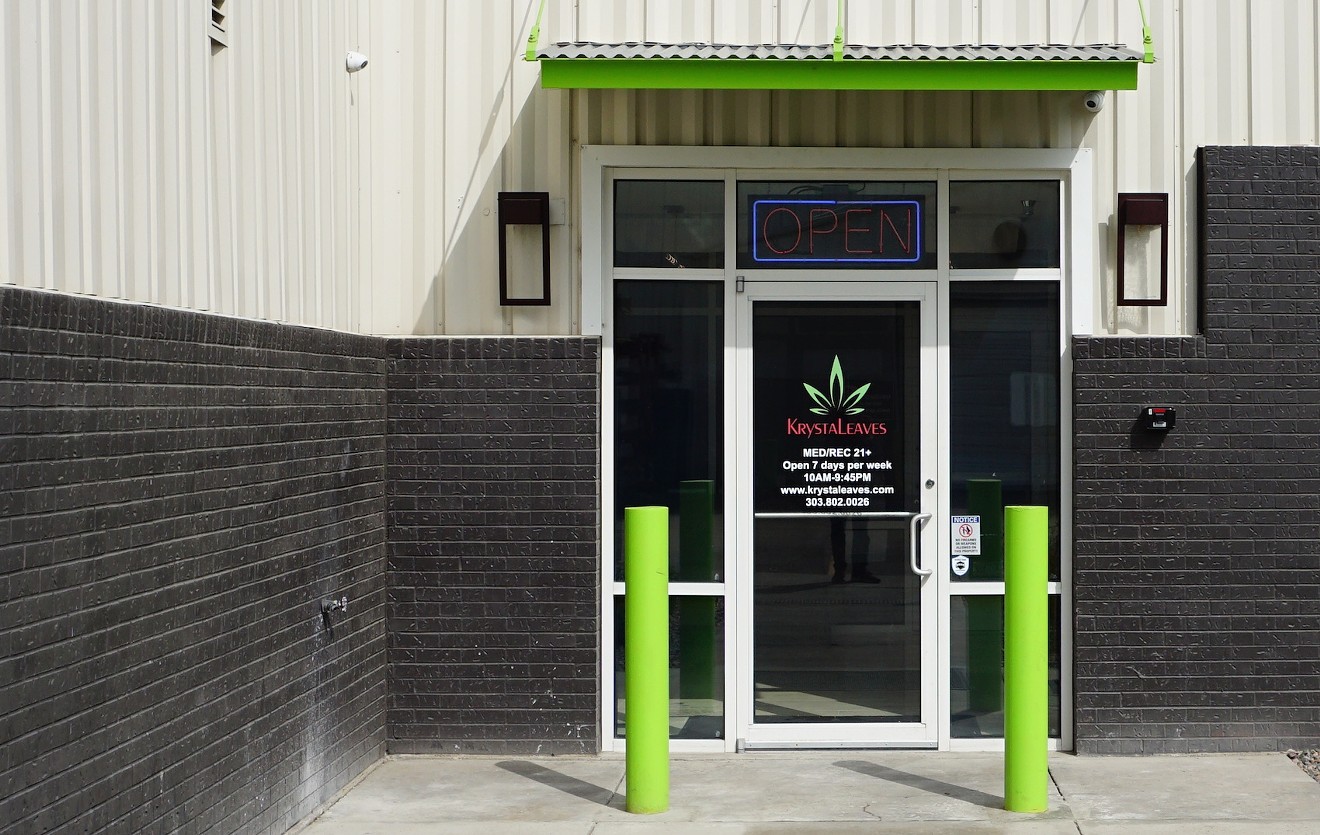 KrystaLeaves is technically located in Commerce City, but the flower selection is worth the drive. Courtesy of KrystaLeaves
When retail cannabis sales were just starting in Colorado a half-dozen years ago, most of the weed we bought was grown by the dispensary from which we purchased it. Did that mean all of it was good? Hell, no, but at least we could put a face to the buds.

A lot has changed in six years, with updated laws and an evolving industry leading to more wholesale growers. Most dispensaries now get their cannabis from a variety of sources, and that's largely for the best (we all love options), but it's still gratifying to try things at the source. After all, if I go to a brewery, I want beer made by the brewery I'm visiting, not another one seven miles away. The same goes for a pot shop — if what it's growing is good, that is.

Lucky for us, a lot of dispensary growers know what they're doing. Some have loyal followers willing to drive over an hour for flower, and some produce such good weed that other stores would rather buy it wholesale than grow their own.

Here are eight of our favorite dispensary cultivations in Denver:

KrystaLeaves
5301 Vasquez Boulevard, Commerce City
303-802-0026
Relatively new to Denver's cannabis scene, this Commerce City shop wasted no time shooting up local cannabis connoisseur power rankings. KrystaLeaves is operated by the Fernandez family, who moved to Colorado from Miami and worked on preparing their grow and dispensary for over two years before opening for business, with son Alex leading the cultivation side. Alex's grandfathers grew tobacco in Cuba, and like his elders, Alex grows something worth a trip — just for the chance to roll up and smoke it. KrystaLeaves is one of the few pot shops selling multiple phenotypes of the same strain, allowing you to try several different slices of Layer Cake or Frozen Lemons.

House of Dankness
10555 East 45th Avenue
303-373-7373
If you don't trust our opinion on House of Dankness, just look at the countless other dispensaries that carry genetics and flower born from the hand of Scott Reach, the brain behind House of Dankness and Rare Dankness seeds. Rare Dankness creations like Ghost Train Haze, Jenny Kush and Tangerine Kush have spread far beyond Denver, even into other states and countries — but you want to visit the mothership in north Denver. Dark, piney buds are the specialty here. Any seasoned toker looking for potent cuts of Kush and OG strains will feel right at home.

2042 South Bannock Street
720-390-5070
Denver Recreational Dispensary (Den-Rec for short) is one of the few bright lights in downtown Denver for cannabis shoppers seeking elite weed. Head grower Ryan Buffkin couldn't care less about THC testing results, with Den-Rec strains ranging anywhere from 10 to 20-plus percent THC; it's all about smell, flavor and exotic strains here. Four Kings, an OG-heavy strain hard to find outside of Den-Rec, is a top nighttime choice, while Tropic Thunder, a rare take on Maui Wowie, is a delicious move for daytime activities. Den-Rec also sports hard-to-find varieties of the Cookies family, including Guava and Spumoni Pie.

Kind Love
4380 East Alameda Avenue, Glendale
720-390-3600
I swore off Colorado Boulevard for good after moving from the east side of Denver — unless I'm going to Kind Love, that is. Potent, tasty and visually striking, Kind Love's flower is one of the safest bets in town (so don't be afraid to pounce on whatever strain is on sale, because you pay for quality here), carrying the same effects and flavor notes every time I take Kind Love nugs home. Alien Rock Candy, Gogi OG, Tiger's Milk and Bordello hold soft spots in my heart, all because of Kind Love. Home growers and other stores agree: Kind Love also operates a wholesale grow and clone bar, which is bare almost every time I visit.