What started as teenage experiments with pot brownies has transformed into a career as a chef with a deep love for concocting cannabis-infused fine-dining experiences. Chef Jarod "Roilty" Farina, a 39-year-old South Florida native, moved to Denver around eight years ago to pursue his interest in the growing culinary trade. Over the years, his various travels, prize winnings and television appearances have allowed him to grow into one of Colorado's most creative culinary pioneers.

Today, Farina's company, Dine With Roilty, comprises his private chef service, which specializes in multi-course infused dinners, and cannabis cooking classes of all levels. His dishes continue to change as his cooking style shifts with every new technique he encounters. We caught up with Farina to see how his journey began, the relationships he's made along the way, and where he sees the business taking him in the near future.

Westword: How and where did you get started in the culinary world and discover your passion for   cannabis?

Jarod Farina: My passion for cannabis started at an early age. We were messing around back in the day with edibles and stuff, but I never thought that I’d be on this path. As far as culinary goes, I worked in the restaurant industry a lot when I was younger. One of my first jobs was in the dining industry, but I only worked front-of-house, being a server, host, bartender, all that kind of stuff. ... I did a lot of other things [deejaying, computer repairs], and then I started competing in hash-making competitions, won that, and that brought me to Denver  and the cannabis industry. Then we had a big dinner one night, and we decided to infuse it.

It was for New Year’s Eve, and we had a bunch of friends over, and everybody had a really good time. That was about the same time Bong Appétit was getting popular. Then I saw the High Times Top Cannabis Chef competition and decided to enter, and that’s when I started along this path. What really kicked me off in it, though, is that my wife and I travel the world and eat at all the fine-dining restaurants we can. That’s our studying. We implement flavor profiles and techniques and textures and things like that into our dishes. So I do a lot of traveling and research in different restaurants from some of the top chefs in the world. 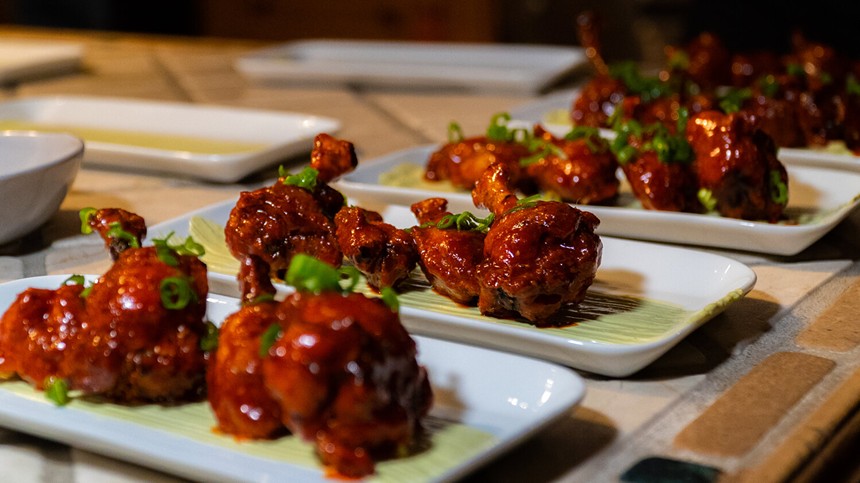 Cannabis-infused chicken wings — a fan favorite.
Jarod Farina
Was there ever a lightbulb moment for you? Is there a specific time or occasion when you realized a potential for cooking with marijuana?

I’d say that I just found out it was a niche for me, mostly. I’ve been cooking with cannabis since I was a kid. It’s different from smoking it, and so the benefits for me [came] early on. As far as a lightbulb goes, it was more of a "This is meant to be for me." For me, it was a combination of everything I’ve done in my life. Basically, I’ve worked every side of the restaurant industry and I’ve done a lot with cannabis, so for me it's a culmination of them both, putting them together, running my own events and stuff like that.

Cannabis-infused cuisine has become a pretty popular concept over the last decade or so. How does incorporating cannabinoid elements enhance one's eating experience?

For me, we treat it like alcohol. We treat it like anybody can either partake or not partake in our dinners. Basically, we micro-dose each course, and we offer a three- to seven-course option. We get a lot of parties from out of town, and we might have people who don’t want to partake with the group, but we don’t want to exclude them from the group. And then you run into things where somebody might have a low tolerance, so we do a per-person thing where we kind of personalize the experience for each and every person, so they can get as high as they want.

You’re not really going to taste the cannabis in the dinner. It’s definitely hidden in the meal. As far as getting hungrier, you always get hungrier with edibles. As far as the experience goes, the dinners get livelier and livelier as they go. By the time we leave, we can hear them laughing from the streets.

How would you describe your cooking style, and how is this reflected in your dishes?

I’m French-trained, but with Italian and Asian influences. Some of my favorite dishes to make would definitely be pastas. We do handmade pastas and homemade sauces. We’re popular for our chicken wings, for sure. We infuse anything and everything. There’s nothing that we stray away from. We’ve done oyster dishes. We’ve done ceviches. All kinds of things that you probably wouldn’t think to infuse.

Farina's homemade 420-themed pasta.
Jarod Farina
Are there any chefs or food-related figures that you look up to or have gained inspiration from over the years?

For sure. Obviously, big names like Thomas Keller have definitely inspired me in cooking. I’ve gotten to cook in some pretty cool places during my travels. I got to stop at Joël Robuchon; it’s the only spot to ever get three Michelin stars in Vegas. They basically asked me to stage there if I wanted to. I was basically a fly on the wall tasting sauces, learning different techniques and stuff like that. We actually cook some of the Robuchon dishes in some of our dinners, as well.

You've made some exciting TV appearances over the course of your career. Tell me a little bit about your experience on Chopped 420 and Bravo's Southern Charm.

Chopped 420 was kind of craziness the whole time. It was a lot of fun. It was definitely a great experience. The stuff they threw at us as far as the food goes was kind of crazy and didn’t make much sense at first. But by the time you get into it, it kind of unfolds like a puzzle, you know what I mean? But it was very intense and high-speed. They shoot the whole thing in a day, so it was a long day, for sure. But it was great to meet some other cannabis chefs and like-minded people and develop relationships with those people moving forward, and it’s been awesome. Southern Charm was a lot of fun, as well. That was the first appearance I did, and some of them were interested in it, some of them were anti[-cannabis]. But at the end of the day, they all came up to us and were very thankful and happy that we were there, even the ones that were upset on the show.

Looking to the future, how do you intend to amplify the art of cannabis cooking and enhance your techniques? Do you plan to extend your event services or classes?

Right now we offer in-home private dining experiences. Basically, the chef comes to you. We do all of the shopping, prepping, cooking, cleaning, infusing…the guest provides the cannabis. We also provide classes. We teach everything from basic beginner stuff, like infusing and 101 stuff, to advanced techniques, like chocolate-making and pasta-making. In the future, we hope to expand to some other markets outside of Denver.

I have something else coming out soon that I can’t talk too much about, but it’s going to be on the Food Network. What I specialize in is bringing the fine-dining element to the cannabis industry, whether it be smoke tricks or activating different senses, like a sense of surprise and sense of smell, and really getting people involved with their dinner. With our dinners, it’s more than just about cannabis. It’s really about the food, and the cannabis is definitely an added-on cursor. I’ve taken classes in Italy, and I’ll be taking classes in Paris in March. I’m basically taking classes in different countries and learning as much as I can. It’s an ongoing journey that I’m still on.
KEEP WESTWORD FREE... Since we started Westword, it has been defined as the free, independent voice of Denver, and we'd like to keep it that way. With local media under siege, it's more important than ever for us to rally support behind funding our local journalism. You can help by participating in our "I Support" program, allowing us to keep offering readers access to our incisive coverage of local news, food and culture with no paywalls.
Make a one-time donation today for as little as $1.