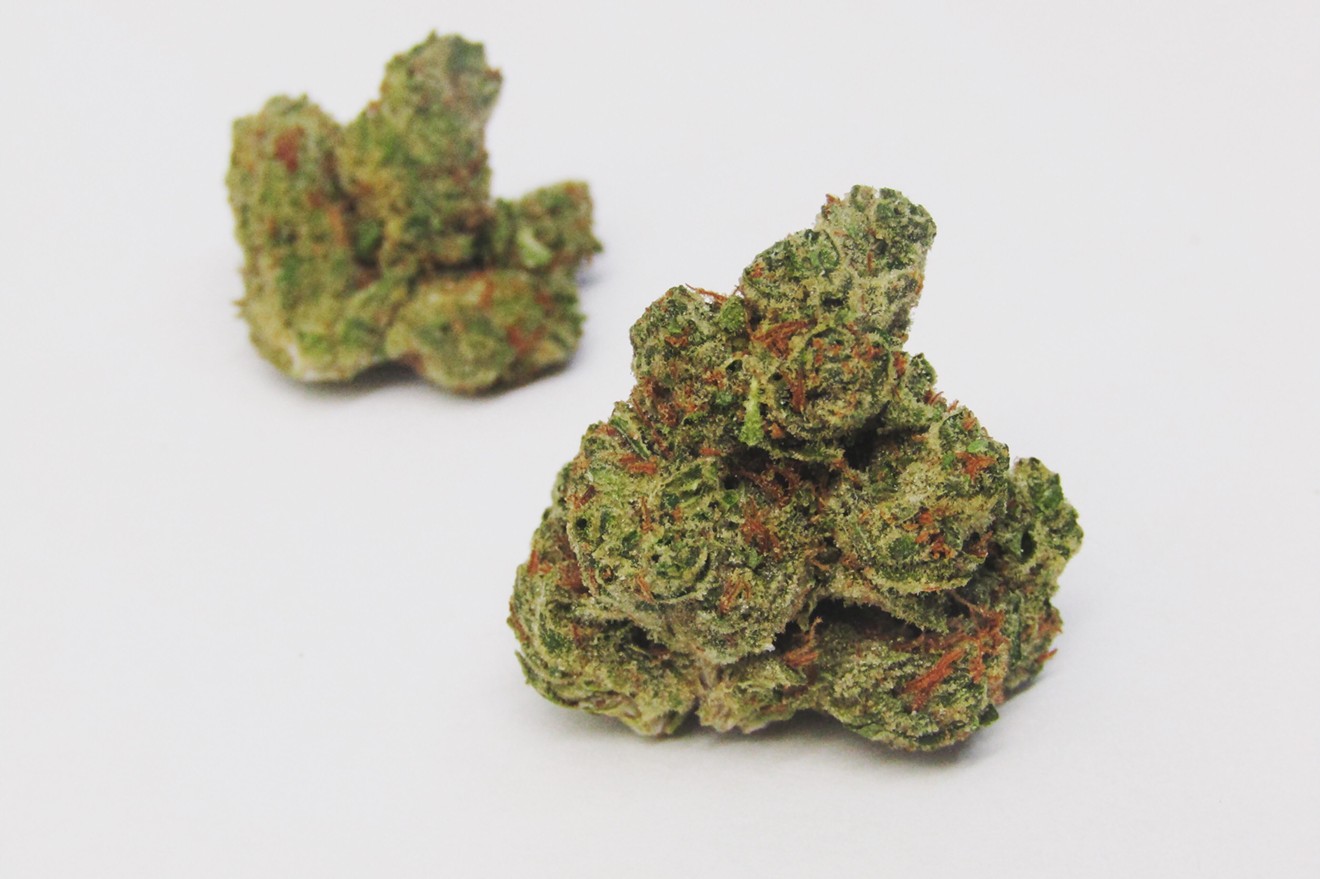 Don't be rude. Wait for La Chem. Herbert Fuego
Once you reach a certain level of regular cannabis consumption, your tolerance doesn’t always allow your body to react to strains as sensitively as less frequent users might. So a hit of Super Lemon Haze won’t make my mind race like it once did, nor does a small bowl of Banana Kush knock me out with the same efficiency. I can still experience the intended effects from particular strains, though I usually have to consume more.

But any little bite of Chemdog will shoot up my spine and zap my brain no matter how big my tolerance and ego get. Whatever it is about Chemdog and the family of chemical-smelling, brain-dicking strains that it has produced over the years, my mind sure can’t handle them.

Such an unproductive bliss isn’t as welcome as it once was now that I have more big-boy responsibilities, but it’s certainly fun for a night or a solo Saturday morning full of cartoons. So when I came across Chem De La Chem, I prepared myself for a session with the head of the class — the Chem of the crop, if you will — and the strain’s forest-inspired funk, gasoline influence and halfwit high didn’t disappoint. Sessions with Chem De La Chem consistently produced a short-lived energy with a long-lasting euphoria, leaving me incapable of giving a shit about answering emails and texts or taking the trash to the curb. Such a vacation from life can be detrimental if taken all the time, but every once in a while, it enables helpful self-help retreats at home over the weekend.

Chem De La Chem hasn’t risen to the top of Denver’s pot hierarchy yet, but a lineage of Chemdog, a northeastern classic, and I-95, a strain named after the East Coast’s main interstate highway, points to roots at the far end of the country. We’ve seen the strain around town at the Giving Tree of Denver, Good Chemistry, Kind Love, Lightshade and Seed & Smith, with wholesale flower further distributed by Willie’s Reserve, and concentrate made by Green Dot Labs. My favorites so far have come from Kind Love and Green Dot, both of which might as well have had gas fumes rising from their bottles.

Smell: Like twisting a lime over an old carpet in a forest cabin and shoving your nose in it. Chem De La Chem is a great balance of Chemdog and OG qualities, with dank, earthy whiffs of sandalwood and pine leaves layered with funky, sour notes of rubber and gas.

Flavor: Expect a more piney, floral taste than the traditional gasoline flavor of Chemdog, but the classic chemical taste undoubtedly makes an appearance. Those earthy, fuel-like flavors are covered in subtle, spicy notes of wood.

Effects: The powerful, disorienting head high also leaks into the body, calming anxious limbs and, in my case, relaxing the stomach to the point of insatiability. I don’t recommend any important social interactions or complex chores after a session, but Chem De La Chem is a prime candidate for anyone seeking relaxation or stress relief.

Home grower’s take: “That Triangle Kush influence in I-95 is likely behind that musty OG scent, but Chem De La Chem smells like straight fuel in the grow. Took about eight or nine weeks to cut down once it started blooming, I think, but I did have to grow this one from seed. Not sure if it’s available in clones out there, but it’s worth a try if you find it. Those Chem-y flavors and the happy head high are worth the time; I don’t care what the yield is.”