Shutterstock/Per Bengtsson
If someone asked you to guess the weekends when dispensaries make the most money, the weekend closest to April 20 would probably be high on your list. After all, 4/20 and, to a lesser extent, 7/10 are known as unofficial stoner holidays around the country. But the biggest weekend of all in Colorado? Last year it was Labor Day.

And the high numbers around 7/10 likely have more to do with summer travel than the dabbing holiday; according to BDS, tourism plays a major role in the shift in sales numbers. In fact, seven of last year's biggest weekends fell in summer months, and only one came after September. Here are the BDS stats: 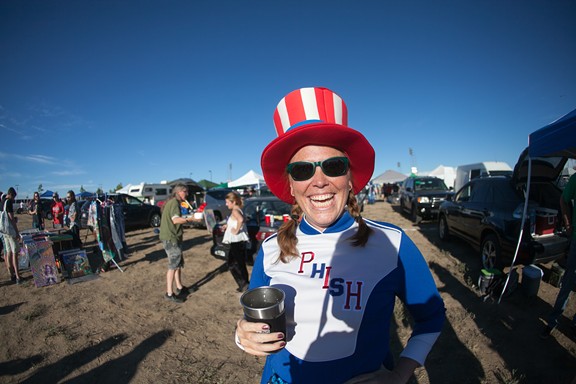 Phish's round of concerts on Labor Day weekend might have something to do with dispensary sales.
Brandon Marshall
The list somewhat parallels the busiest days at the airport: Denver International Airport is expected to be the country's fourth-busiest airport on Labor Day, according to a travel forecast by RewardExpert. Also, 2013 data from the Federal Aviation Administration shows that only three of the thirty busiest days for American airports fell outside of May to August, and only three were within five days of a major holiday.

"While 4/20 receives most of the holiday-oriented pot attention, it has not shaped up to be much of a multiple-day holiday. Instead, 4/20 represents a big day of sales. Labor Day weekend, on the other hand, is a big deal for cannabis retailers," BDS Analytics notes.

Various dispensaries are offering specials this Labor Day weekend. At Native Roots from September 1 through September 4, for example, if you buy one pack of Shortys at the regular price, you get a second pack for $4.20 (while supplies last, tax not included, select strains only...and this deal cannot be combined with other offers or discounts).