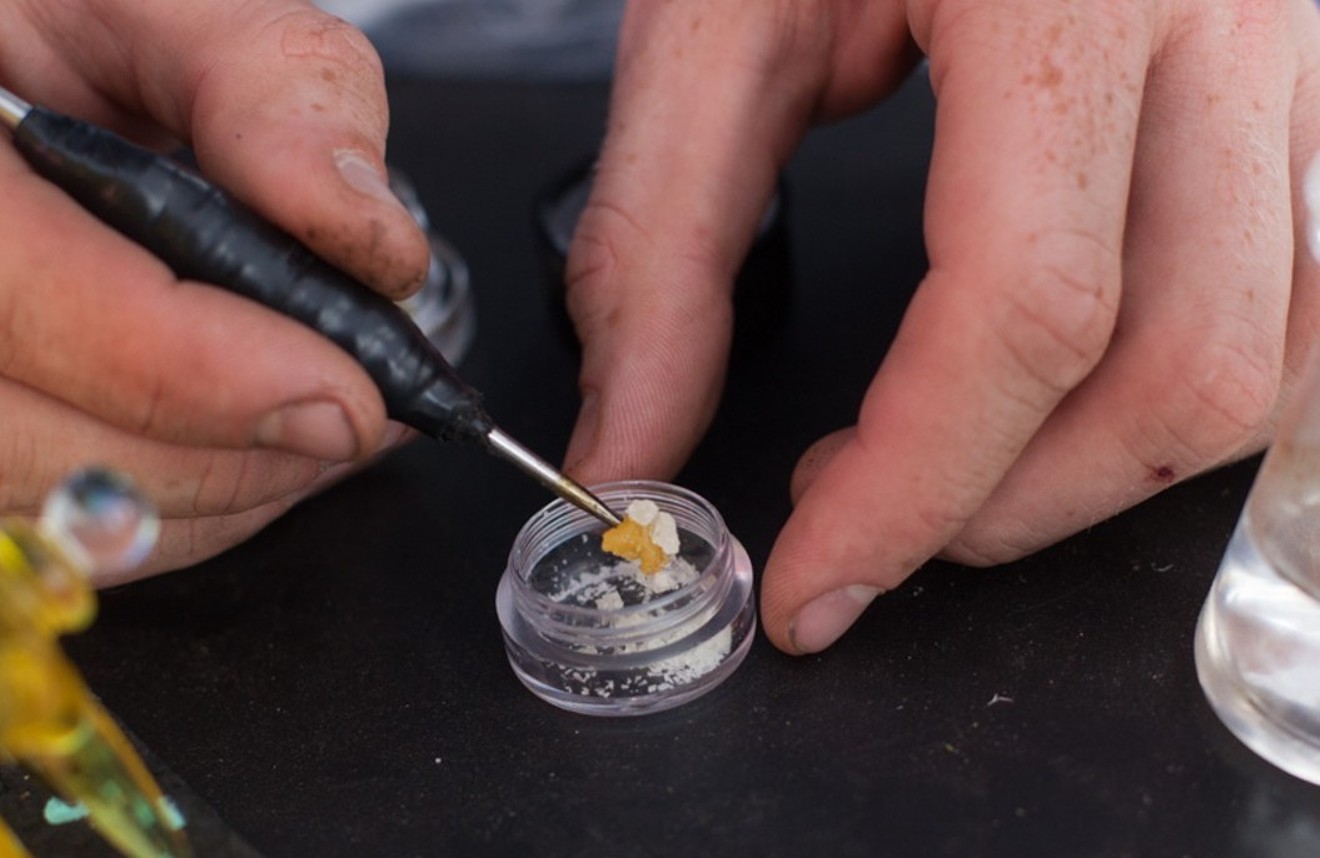 House Bill 1317 calls for several new layers of protocol for medical marijuana patients and their physicians. Jacqueline Collins
Colorado lawmakers have approved an expansive bill that would tighten medical marijuana rules and mandate research into the mental health effects of high-THC marijuana products.

On June 8, the state House unanimously approved Senate amendments to House Bill 1317, passing the measure out of the Colorado Legislature and sending it to Governor Jared Polis. Attracting plenty of attention from both sides of the marijuana aisle, the bill had been heavily amended after its introduction by House Speaker Alec Garnett in May, and changed 29 times during House and Senate discussion.

If signed by Polis — his administration hasn't commented on the measure — the bill will add several additional layers of protocol for medical marijuana recommendations, including a required THC dosage amount and added medical and mental health reviews. The measure would also institute new packaging requirements for commercial marijuana concentrates and create an expanded tracking system for patient purchases.

More state restrictions on concentrated THC products had been pushed by lobbies representing parents, public educators and health-care representatives as Colorado health professionals declared a state of emergency in youth mental health and Colorado Department of Health and Environment data showed that the use of extracted marijuana products more than doubled among teenagers from 2015 to 2019.

Under the bill as passed, all marijuana concentrate products, both medical and recreational, would fall under new packaging or labeling rules created by the state Marijuana Enforcement Division, but the ultimate rules will likely be much lighter than the first version of Garnett's bill, which had suggested that all THC concentrate be individually packaged in servings of ten per gram.

“We were at the table collaborating with policymakers and stakeholders for five months to help create a bill with responsible regulations and balanced public policy,” says Chuck Smith, board president of Colorado Leads, one of the state's largest marijuana trade organizations. “Those of us in the cannabis industry proactively identified areas in the law where the legislature could make policy improvements to further safeguard Colorado teenagers, such as limiting how much marijuana product eighteen- to twenty-one-year-olds with medical marijuana cards can purchase daily.”

Although organizations such as Colorado Leads and Marijuana Industry Group supported the bill and were included in the stakeholder process, some medical marijuana patients and physicians are concerned that their communication with bill sponsors was limited at best, according to Cannabis Clinicians Colorado, a group of health-care practitioners working with medical marijuana.

"The sponsors of this bill seem to believe the 5 percent of registered medical marijuana patients who are eighteen to twenty years old are more likely to both abuse cannabis concentrates and to illegally divert them to minors. Unfortunately, their solution is to restrict all medical marijuana going forward," the CCC wrote in a letter to Polis, asking him to veto HB 1317. The letter warned that if the bill is enacted as written, it would "end Colorado’s medical marijuana program."

Medical marijuana advocates such as the CCC believe that adding dosage and consumption rules to a medical marijuana recommendation makes that a prescription, and doctors with prescription power must register with the Drug Enforcement Administration, which doesn't allow prescribing Schedule I drugs — a federal label that still applies to cannabis.

HB 1317 also requires doctors to recommend medical marijuana within their respective scopes of practice, which would likely require additional doctor visits, according to opponents of the bill.

"HB21-1317 seeks to wrongly limit the scope of practice for cannabis providers by no longer allowing them to diagnose patients themselves, thus forcing patients to pay for two medical visits: one to diagnose, and a second to recommend medical marijuana," the CCC argues.

Some medical marijuana doctors believe that more detailed information should be included in patient recommendations, however.

According to Association of Cannabis Specialists president Dr. Jordan Tishler, giving dosage and consumption instructions to a medical marijuana parent should be part of a doctor's responsibility and fall under informed consent, a federal law requiring physicians to disclose all pertinent information about risks and benefits of the procedure to the patient.

"Being specific about products and their details is not illegal, and we need to recognize that not doing those things violates informed consent," Tishler says. "And if [a medical marijuana product] works or doesn't work, we have some basis of understanding to what's going on."

Although Tishler supports that aspect of the bill, he also says he believes that HB 1317 is harmful overall for medical marijuana patients, and agrees that adding a scope-of-practice requirement could make it difficult for some patients to find a doctor willing to recommend marijuana.

"The appropriate thing is to not pass a new law, but use the laws that exist to examine the physician's actions," Tishler says. "This is not going to accomplish anything positive. It will make life harder for a lot of people."

Medical marijuana concentrate sales limits will also be significantly reduced under HB 1317, and prospective patients between the ages of eighteen and twenty — a contributing factor to youth consumption, in the eyes of the bill's sponsors — would face additional obstacles to obtaining a medical marijuana card.

Under the bill, $3 million would go to the Colorado School of Public Health for an educational campaign about youth use and extracted THC, with another $1 million annually through fiscal year 2023-’24 funding a CSPH review of existing research and further study of the mental health effects of marijuana.

In another $1.7 million project, coroners would annually report the results of THC toxicology screens in suicide, overdose and accidental deaths for people under the age of 26 to the Colorado Violent Death Reporting System.
KEEP WESTWORD FREE... Since we started Westword, it has been defined as the free, independent voice of Denver, and we'd like to keep it that way. With local media under siege, it's more important than ever for us to rally support behind funding our local journalism. You can help by participating in our "I Support" program, allowing us to keep offering readers access to our incisive coverage of local news, food and culture with no paywalls.
Make a one-time donation today for as little as $1.