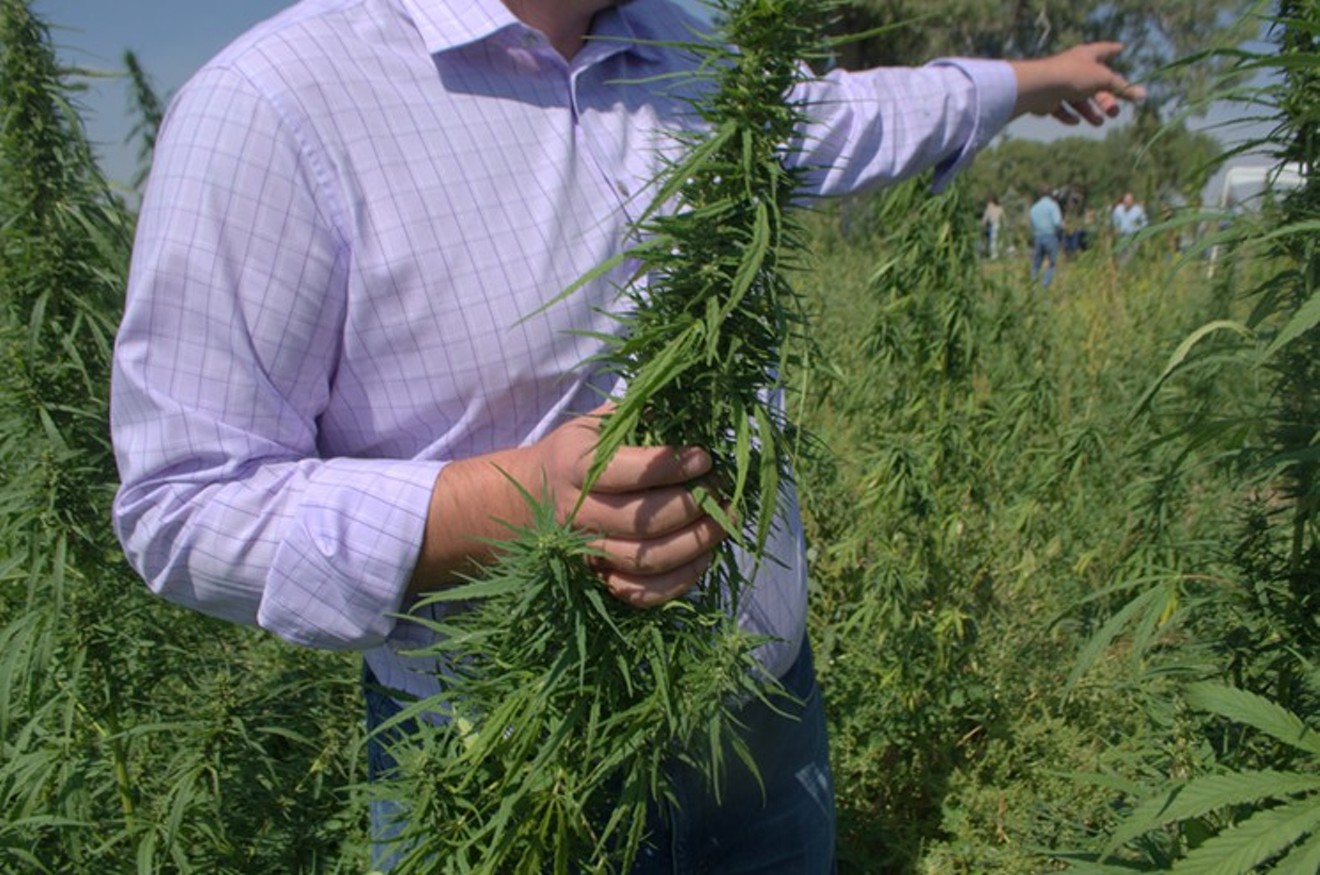 Hemp is a growing cash crop in Colorado and beyond. Lindsey Bartlett
Dispensaries might get all the attention, but hemp farmers are getting the acreage – 23,343 acres, to be exact, according to a new study by Vote Hemp, an organization dedicated to advancing the industrial hemp industry. And which state is leading the pack? Colorado, by far.

Vote Hemp just released the results of its study measuring the number of acres on which hemp is grown across the country. The report found that 33 states have enacted some form of hemp-specific legislation; nineteen of those have created licenses to grow hemp for industrial or research purposes. Among those growing, Colorado accounts for nearly a third of the legal hemp acreage in the country in 2017, at 7,500 acres. Oregon(3,469), North Dakota (3,020), Kentucky (3,000) and New York (2,000) rounded out the top five.

Vote Hemp
“We’ve seen hemp cultivation significantly expand in the U.S. in 2017, with over double the number of acres planted in hemp compared to last year and the addition of four more states with hemp pilot programs,” Vote Hemp president Eric Steenstra says. “The majority of states have implemented hemp farming laws, in clear support of this crop and its role in diversifying and making more sustainable our agricultural economy."

Hemp's legality had been somewhat murky, thanks to the federal government's prohibition of cannabis. Since the passage of the Fertilizer Access and Responsible Management (FARM) Act in 2016, however, the commercial hemp business has boomed. The act includes a section called "Legitimacy of industrial hemp research," which legalized hemp growing for research purposes under agricultural pilot programs and academic research; it also allows states with legalized hemp-growing programs to operate without federal interference.

Like the retail marijuana industry, the hemp field has moved faster in Colorado than in other states because voters approved legalization in 2012, according to industrial hemp farmer Gabe Rimey. Unwilling to deal with the stiff regulations around retail marijuana, Rimey founded Homestead Organics in 2016 to get in on the hemp trade, building a greenhouse in Douglas County where he grows CBD-rich strains of hemp.

"It really is so much easier from a licensing perspective when you talk about hemp laws compared with recreational or medical [marijuana]," he says. "In Colorado, we got a head start when we legalized, and people broke ground on hemp almost immediately. There was no oversight then, sort of like back in 2008, when medical dispensaries just started out." Gabe Rimey tends to his CBD-rich varieties of hemp inside his greenhouse cultivation in Franktown.
Courtesy of Homestead Organics
According to the Colorado Department of Agriculture, there were nearly 500 registered hemp farmers in Colorado as of October 30, 2017. Rimey credits the CDA's embrace of industrial hemp as a strong reason why, pointing to a relatively cheap $500 application fee and $5-per-acre charge that farmers pay to grow hemp. "Once you apply and get a license number, you're kind of off to the races," he explains.

That doesn't mean there isn't room for improvement. Rimey believes that Oregon, which increased its hemp fields from 500 acres in 2016 to 3,469 this year, is in a better position to become the country's leading producer. "They're coming up in a big way. They have a more favorable system out there," he says, explaining that the CDA only tests hemp plants for THC potency and not the final product, such as CBD oils and isolates – unlike Oregon, which tests the final product. Because cannabinoid extraction can further remove THC from CBD concentrates, hemp-industry advocates are calling on states with legalized hemp to apply the 0.3 percent THC limit to the final product, and not the plants themselves.

"With any legislation, you run the risk of unintended consequences. When we started growing hemp in Colorado, everyone was thinking about the traditional lines of growing for seed, food, fiber and shelter," Rimey says. "But that's just not the case anymore."

Hemp farmers have largely shifted their focus from hemp seeds and fibers to CBD oil. Some industry experts estimate that as many as 95 percent of the hemp farmers in Colorado are growing solely for CBD extraction – and with good reason. According to Hemp Business Journal's 2017 mid-year report, CBD product sales more than tripled from 2014 to 2017, going from $108.1 million to $358.4 million. By 2022, the report estimates,the CBD industry will take in $1.812 billion in sales.

"The fact that you can have a 15 to 20 percent CBD percent strain now – that wasn't happening even four or five years ago," Rimey says. "With today's genetics, you couldn't see the difference between a commercial marijuana strain's flower and a high-CBD hemp strain's."