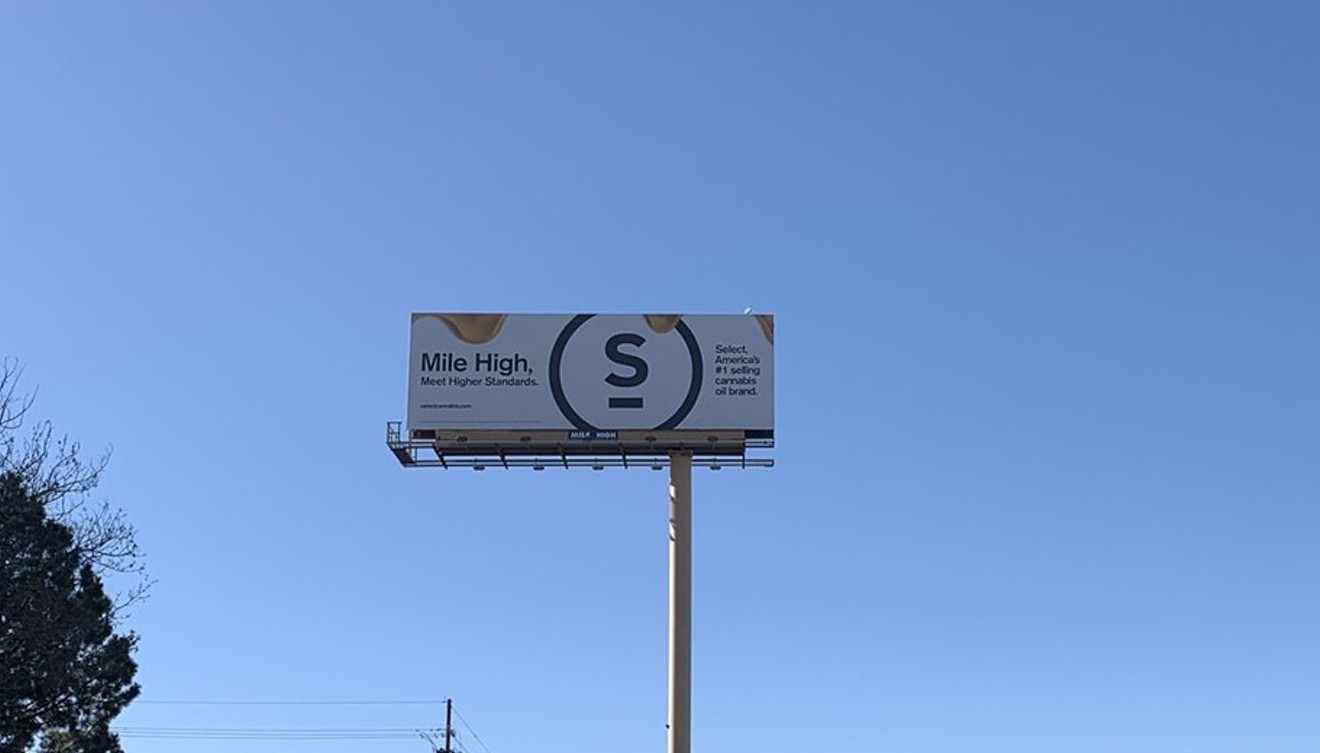 Marijuana advertisements on billboards, like this one in Lakeside, are becoming more common around Colorado. But not in Denver. Clara Geoghegan
Denver hasn't adopted a new state law allowing marijuana industry billboards in Colorado, but that could change soon.

State laws implemented in January let marijuana companies advertise outdoors using billboards, but as with many new pot freedoms, local jurisdictions have to opt in first. And so far, Denver hasn't.

Colorado’s current marijuana advertising laws, created by the State Licensing Authority, follow voluntary advertising restrictions similar to those used by the alcohol industry to prevent the sale or diversion of marijuana to minors. However, the plant's federal status led to a more restrictive advertising landscape for pot than for alcohol.

With the exception of company signs on business properties, any advertising visible from streets, sidewalks, parks and other public places was illegal until January 2020, but that restriction is starting to ease, thanks to a 2019 bill overhauling state marijuana industry regulations. Marijuana businesses may now use outdoor advertising as long as it's at least 500 feet away from schools, playgrounds and churches...and the municipality where the sign site is located allows such advertising.

Denver hasn't joined the party yet, but could allow marijuana billboards in the future, according to Eric Escudero,
communications director for the Denver Department of Excise and Licenses.

All outdoor cannabis advertising is still illegal in Denver, but as nearby communities such as Glendale and Lakeside — which some people assume are pot of Denver — allow the pot industry to buy billboards, "It’s possible that Denver could align more with what the state law is," Escudero says.

Denver City Council is expected to decide whether to adopt a sweep of new marijuana regulations that Escudero calls "Marijuana 2.0" before the end of the year. Along with potential changes to advertising policy, the city will consider adopting looser rules surrounding marijuana hospitality and delivery. After compiling input from public-health officials, industry representatives and social equity advocates, Excise and Licenses will make formal recommendations to the council, which ultimately decides on marijuana policy changes.

Current Colorado law states that advertisements cannot appear in media where more than 28.4 percent of the target audience is under 21, the legal age to buy or possess recreational pot. Marijuana businesses may advertise on television and radio, in print publications or on the Internet as long as the ads comply with target age restrictions, and as long they don't claim that products are safe or have health benefits.

Colorado marijuana businesses have already found another way to showcase themselves, however.

The Sponsor a Highway program — a partnership with the state Department of Transportation in which private entities maintain a clean, two-mile stretch of highway in exchange for a sign displaying the sponsor's name — saw marijuana companies sponsor 48 percent of the program's 248 miles of highway in 2018, according to a Westword report by Michael Roberts.

Silver Stem Fine Cannabis, one of several Colorado businesses that has adopted roads throughout the state, doesn't consider participation in the Sponsor a Highway program a form of advertisement (even though one of the first references on the Sponsor a Highway's website concerns brand exposure). Since the message that appears on a sign cannot include product information or business locations, Silver Stem co-founder Stan Zislis contends that he and his colleagues "truly believe that our sponsorship of Adopt-a-Highway is truly a sponsorship in the full sense of the word, and not advertising."

Although Silver Stem Fine Cannabis doesn't currently have plans for outdoor advertising, Zislis sees the relaxation of cannabis advertising laws as a good move forward. "The underlying message during the Amendment 64 campaign was to regulate marijuana like alcohol. While marijuana still remains a more restrictive commodity, this is a step in the right direction for the industry," he says.

Before any new advertising changes are enacted in Denver, though, the city will consider their impact on how youth perceives marijuana, according to Escudero. Since recreational legalization passed in late 2012, Colorado as a whole has not seen a dramatic increase in youth pot consumption, but marijuana consumption rates among Denver's teens have remained among the highest in the state, according to data from the Colorado Department of Public Health and Environment.

“The priority is making sure that that perception of risk does not go down — making it so that youth do not believe that it’s okay for them to use," Escudero says. “Part of the promise when marijuana was legalized in the state was protecting youth. ... That dire prediction of youth usage skyrocketing has not happened, and we want to keep it that way.”
KEEP WESTWORD FREE... Since we started Westword, it has been defined as the free, independent voice of Denver, and we'd like to keep it that way. With local media under siege, it's more important than ever for us to rally support behind funding our local journalism. You can help by participating in our "I Support" program, allowing us to keep offering readers access to our incisive coverage of local news, food and culture with no paywalls.
Make a one-time donation today for as little as $1.
Clara Geoghegan is a recent graduate of the University of Colorado Boulder, where she majored in anthropology with an emphasis on public health. She worked at Radio 1190’s News Underground and freelanced for Denverite. She is now the cannabis intern at Westword.
Contact: Clara Geoghegan