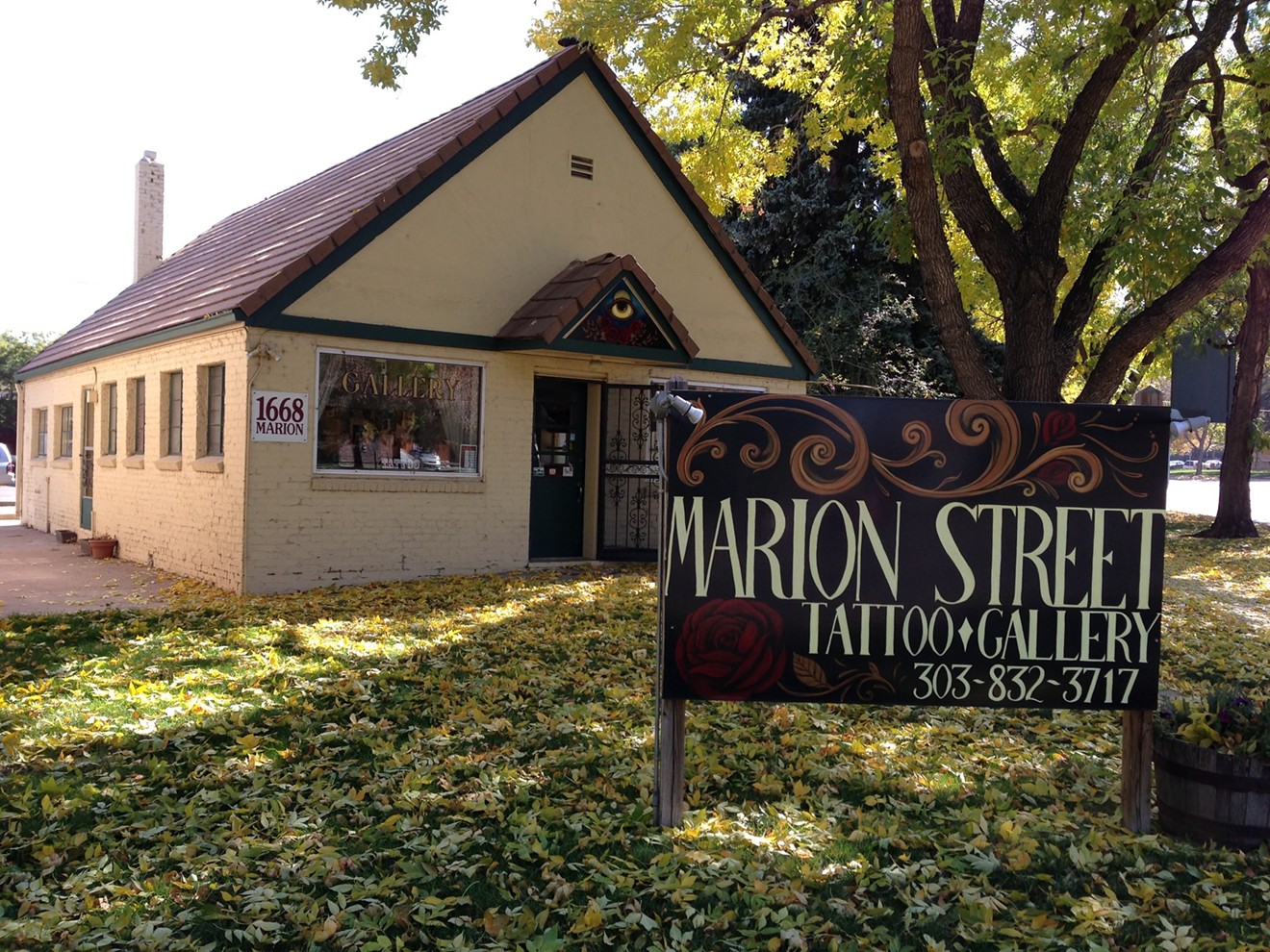 Over the next six months, Seed & Smith will debut a new strain selected by the cultivation staff every month, with hats and shirts sporting creative designs to commemorate the high times. But the business doesn't want its merchandise looking like the Fat Tire shirt you bought your dad in 2014, so it partnered with Marion Street Tattoo Gallery to have artists create designs for Seed & Smith's hats and shirts, with every motif honoring a different cultivar.

According to Seed & Smith community outreach director Robbie Wroblewski, he and several other employees have gotten tattoos at Marion Street over the years, and he's always appreciated the parlor's discounted tattoos and charity drives every Friday the 13th. When the shop was closed for nearly two months at the beginning of the COVID-19 pandemic, Marion Street artists began selling their artwork on clothes to support themselves and other local organizations, and that's when the dispensary collaboration began.

Nate Stephens's interpretation of Grease Monkey, a potent and popular strain of marijuana at Seed & Smith.
Courtesy of Seed & Smith
"We wanted to be sure our friends in the artistic industries are weathering the storm and still performing or are finding the resources they need to keep practicing. Because cannabis and tattooing grew up together in the counterculture, it made sense for us to reach into that realm and see if there was a way we could help," explains Wroblewski.

The legal marijuana industry is hardly struggling this summer, with Colorado dispensary sales breaking monthly records. Tattoo parlors, on the other hand, are closing around the country as artists predict permanent changes to their craft and business models in order to comply with social distancing guidelines and virus fears. For example, while Marion Street is still open for business, it can't accept walk-ins.

"In this instance, we are creating gigs for these guys to keep their creativity flowing as they grow their schedules again. We want this art to be as natural to the artist as if they were throwing it on some skin permanently," Wroblewski says.

The first artist to work with Seed & Smith was Nate Stephens, who designed the art for Grease Monkey, a potent cross of Gorilla Glue and Cookies & Cream. Stephens, who's been in recovery for nine years and doesn't use cannabis, thought the name "Grease Monkey" was just too fun to ignore.

"My creativity is primarily driven by coffee and Sour Patch kids. But I'm definitely pro-cannabis," Stephens says. "I heard the name [Grease Monkey] and immediately had an image of what it needed to be. I tell stories with pictures on a daily basis and oftentimes develop images from a few simple words. That, and talking with Robbie really helped fine-tune the imagery."

Ryan Willard and Trevor Powers are the next Marion Street artists on deck to work with Seed & Smith, with three others expected to join the collaboration in the future. Still, Wroblewski is staying mum on which strains are coming.

"We have some exciting strains in store, a little bit of everything," he divulges. "Exotics, classics, new-gen. We just can’t reveal which ones at this time."
KEEP WESTWORD FREE... Since we started Westword, it has been defined as the free, independent voice of Denver, and we'd like to keep it that way. With local media under siege, it's more important than ever for us to rally support behind funding our local journalism. You can help by participating in our "I Support" program, allowing us to keep offering readers access to our incisive coverage of local news, food and culture with no paywalls.
Make a one-time donation today for as little as $1.