Taking Stoned Snacks Up a Notch at It's a Bodega 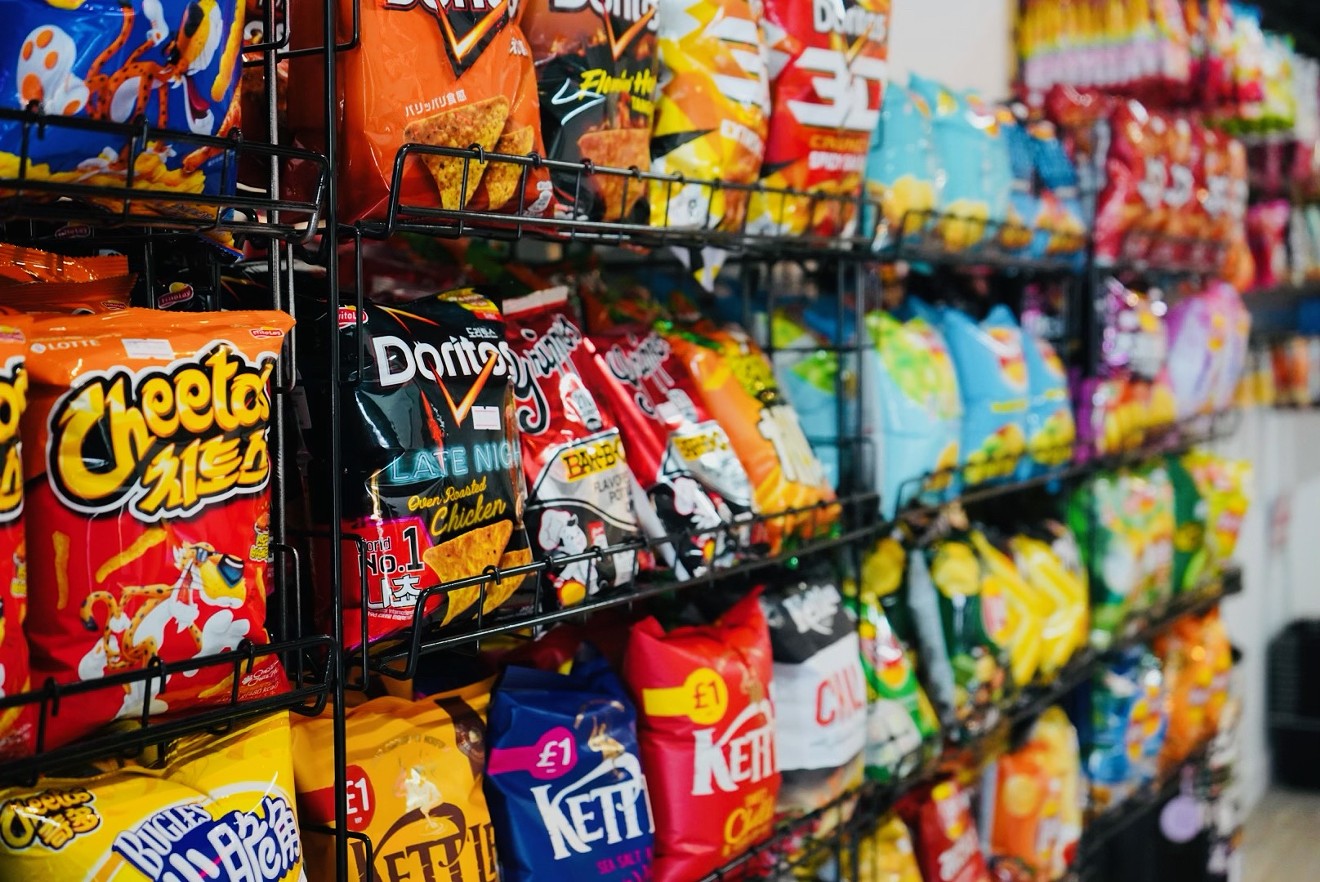 It’s a Bodega carries snacks and sodas from across the globe Courtesy of KC Robinson
Snacking after smoking weed is so commonplace that it has its own culinary category (the munchies), but you don't have to be a stoner to seek out It's a Bodega.

In a world where much of our shopping has gone online, It's a Bodega has no problem getting people to head to 1242 South Broadway for rare Japanese Kit Kats, Taiwanese potato chips with eccentric flavors and outlandish Fanta sodas. Founder KC Robinson launched the exotic snack shop at cannabis pop-ups just before the pandemic hit, but was able to keep the momentum going by catering private events and using social media to forge a loyal following,

Denver now trusts Robinson to procure the sweet and salty goods no matter how far away they're produced. His snacks are so popular that It's a Bodega is opening a new location in RiNo this October, and he regularly puts together snack packs for musicians and celebrities rolling through town. We caught up with Robinson to learn more about snacking from a global perspective and how a true junk-food connoisseur approaches the munchies.

Westword: How did you turn a love of snacks into a business?

KC Robinson: It kind of all started in 2019. I was online and came across some international snacks and foreign Hi-Chews. That was how I was introduced. Shortly after that, I took a trip to London to visit some buddies in the military. Over there I started trying and exploring international snacks that I wasn't familiar with and flavors I didn't know existed. Once I discovered those, my mind was kind of blown.

I brought a whole bunch of stuff back with me from that trip, and all of my friends started taking my stuff. It was a lightbulb moment. I visited more friends stationed in other parts of the world, built supply sources, and then it sort of built itself into a pop-up and online business. Then COVID-19 hit, and it went online.

For a lot of people who've moved here from other countries, these snacks can give them a taste of home. There's a nostalgia factor to it, but they're usually surprised to find out they can buy them here, too.

Are your favorite snacks the international spins on American favorites, like Japanese Kit Kats, or something more exotic?

The Japanese Kit Kats are some of the most well-known and popular exotic foods out there, but I see a lot of the most popular ones being snacks and flavors that Americans never knew existed. One of our more popular variation items are Korean Sun Chips that are a garlic baguette flavor. We also have no-shell Skittles from the United Kingdom, which are one of our best sellers.

What are some flavor combinations or snack variations that you think Americans would embrace more if they had more exposure?

It's a Bodega owner KC Robinson
Courtesy of KC Robinson
Based on what we're selling, the Chinese tiramisu-flavored Oreos are something we can't keep on the shelf. The U.K. likes to make cookies with chocolate centers, like cookies with a Twix filling, which are big here. Then you have a big variety in chips, like steak or turkey-leg Cheetos, fried chicken or avocado Doritos, and other wild things. One of my favorite things is experiencing all of the different fruit flavors from across the world, because we don't get a lot of them here. Things like passion fruit, which are native to Asia, are a popular flavor for candies and drinks.

Which countries are making the most popular snacks at your store?

I would say Japan. They're always popular, but they have the most variety and unique items. The U.K. does, too, and they have a lot of healthier variations of junk food. There are no artificial ingredients or additives in the U.K., like we have here, so you get healthier, more flavorful versions. Australia has some unique flavors, too, like bubble gum-flavored M&Ms.

What do other countries want from us? Which American snacks are popular internationally?

Australians love American Twizzlers, according to my Australian suppliers. I was in the U.K., where they have a store called Taste of America, and it looks just like a Sam's Club and Walmart candy aisle. They had everything we have. People always want what they can't have or didn't know existed.

After a cannabis session, how do you approach the munchies with such a prime stock of snacks?

I have to tread carefully, because I can't overindulge on my own supply. I did that once or twice when I first started, and ended up eating all of my inventory [laughs.] But I do want to try things to give perspective to customers, and I'm a big sweets guy.

I started the business by doing pop-ups at cannabis events, and I saw a lot of people reacting to the stuff I brought. Those events helped me start this store. These things go hand in hand. At some point we've all gone to the gas station or grocery store after consuming cannabis and bought out all the junk food. Being in a "cannabis city" like Denver, this was a natural fit, and people come in all the time because of it. Those pop-ups showed me that someone will pay $10 for a soda if they understood the concept and rarity of something.

Ever have something so rare and expensive that it was hard to eat?

In 2019, we were able to get Oreo Moon Pies from Thailand. We were selling them four for $100, or $25 apiece, and they sold out quickly. Those were really good, but it was hard to eat because of the price. And then at one point we had $40 soda, which was a Fanta White Peach.

What's the one snack you can't get ahold of but really want to try?

As I look through my soda cabinet, I remember a banana yogurt-flavored Fanta from 2008 or 2009. It was discontinued, but it was one of the best sodas I've ever had. As far as candy or snacks, there was a Korean barbecue chicken Doritos — but it was from Taiwan — that I would love to have back.

Pepsi Blue and Fruitopia were discontinued in America, but they still make them internationally, so there are definitely some things out there that you'd be surprised to find, or things that can bring you back to your childhood. I also currently have a Pepsi Crystal, which was brought back for a thirtieth anniversary and is only made for Canada.
KEEP WESTWORD FREE... Since we started Westword, it has been defined as the free, independent voice of Denver, and we'd like to keep it that way. With local media under siege, it's more important than ever for us to rally support behind funding our local journalism. You can help by participating in our "I Support" program, allowing us to keep offering readers access to our incisive coverage of local news, food and culture with no paywalls.
Make a one-time donation today for as little as $1.