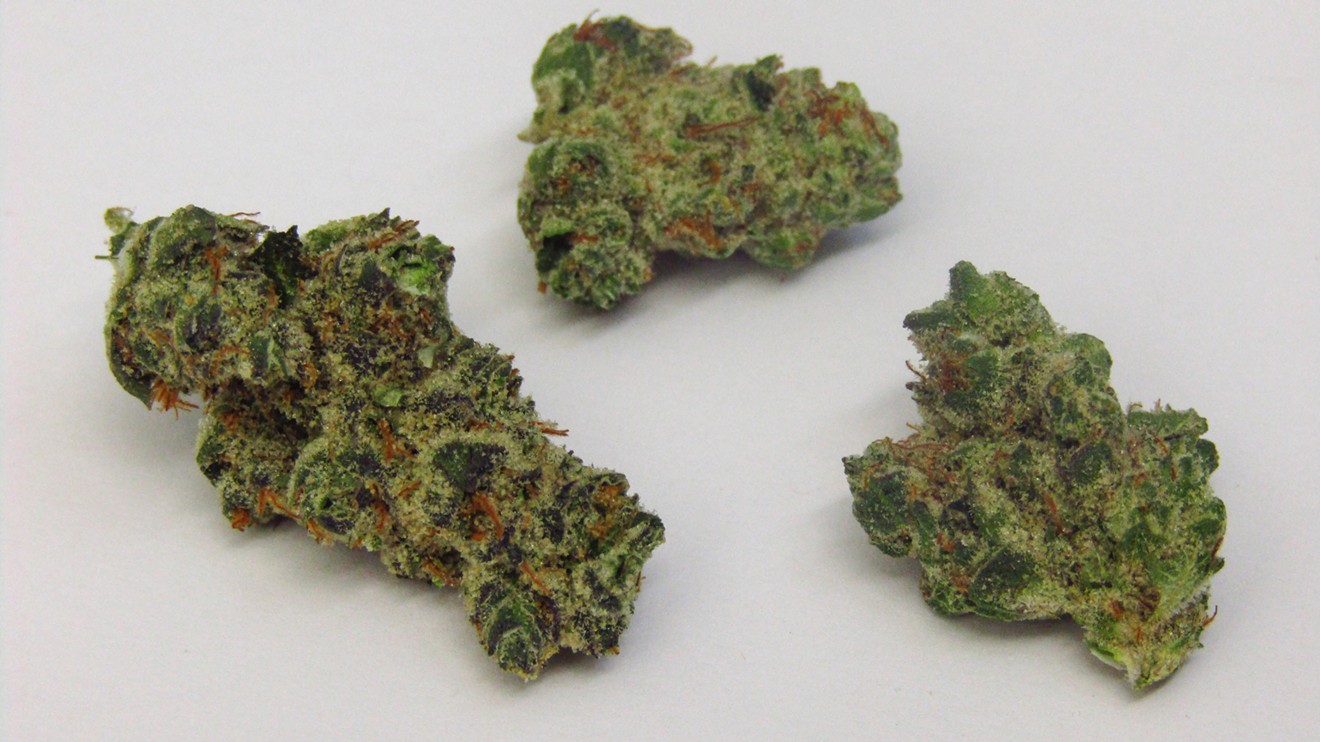 Don't hold GMO's name against it. Herbert Fuego
When I was in second grade, our teacher told us about the grand experiments involving scientists splicing or fusing (or whatever) a gene here or there, which would one day create massive tomatoes and watermelons that could end world hunger. Pretty cool, right? Fast-forward twenty years, and come to find out that my teacher was talking about GMOs (genetically modified organisms), and people are now freaking the fuck out over $6 bottles of juice.

Those who despise GMOs would be unwise to hate on the strain known as GMO Cookies, though. Some breeders and dispensaries have changed the name to Garlic Cookies out of fear of consumer pushback — but anyone who blindly buys commercial pot and whatever the hell it’s laced with, then boycotts a particular strain over its name alone has their priorities wrong.

A child of Chemdog and Girl Scout Cookies from Divine Genetics — a seed bank known for Cookies strains — GMO Cookies is both pungent and sweet, gassy and spicy...and very dangerous. One bowl too many of this strain is like dropping your brain in a wood chipper, slowing you down to half the pace of the rest of the world. Sometimes you’re happy with that, because the tangy, alluring smell makes it hard to turn away. Even when used in moderation, GMO can be disorienting for low tolerances. Know your limits, though, and it can calm tension and upset stomachs.

We’ve spotted GMO and its alter egos at Bgood, Botanico, Frosted Leaf, The Herbal Center, The Herbal Cure, Lightshade and Peak; extractors like Olio and Viola Extracts have sold it in concentrate form to more dispensaries, too. You can’t go wrong with either concentrate version, as both are soaking in piney, gassy terpenes (likely myrcene and caryophyllene, at the very least).

Looks: Generally dark or wintergreen, with regular spots of purple and rust-orange pistils, GMO buds tend to look slender or gnarled, carry a thick coat of trichomes, and have been known to foxtail.

Smell: Full of distinctly different aromas, GMO still finds a way to be somewhat layered, with sweet, rubbery smells of gasoline up front, followed by earthy, chalky notes with a little acidity and spice, like wet, dank grass with a bunch of mud. Still, I think the “garlic” term is forced, unless we’re talking about something fermented. Sure, it smells funky and has some zest, but it’s way too sweet and sour for that name.

Flavor: Like an earthier Chemdog, with a little doughy sweetness hanging around for a few minutes after. The garlic comparison makes a little more sense here, but you still have to look for those zesty and herbal notes.

Effects: Don’t expect to take over the world on this one. GMO can put a seat belt on your couch and keep you there, so treat this as a nighttime or hangover strain. That can take time to figure out, thanks to those Diesel-like fumes, but usually not more than one session. The strain’s relaxing, stoney effects have been used to treat pain, anxiety, nausea, eating disorders and minor mental anguish.

Home grower’s take: “You’ll see a lot more seed banks with GMO or Garlic strains now, especially Divine, Mamiko and Omni. It’s just so thick and sour, like a new-age cut of Sour Diesel, but not a sativa at all. It’ll hold a lot of trichomes, too, so keep that in mind when harvesting and trimming: You can make decent rosin with all the kief that falls down. It doesn’t stretch a ton, and shouldn’t take more than nine weeks to pull. If you can pull a pound and a half from six plants, do it.”