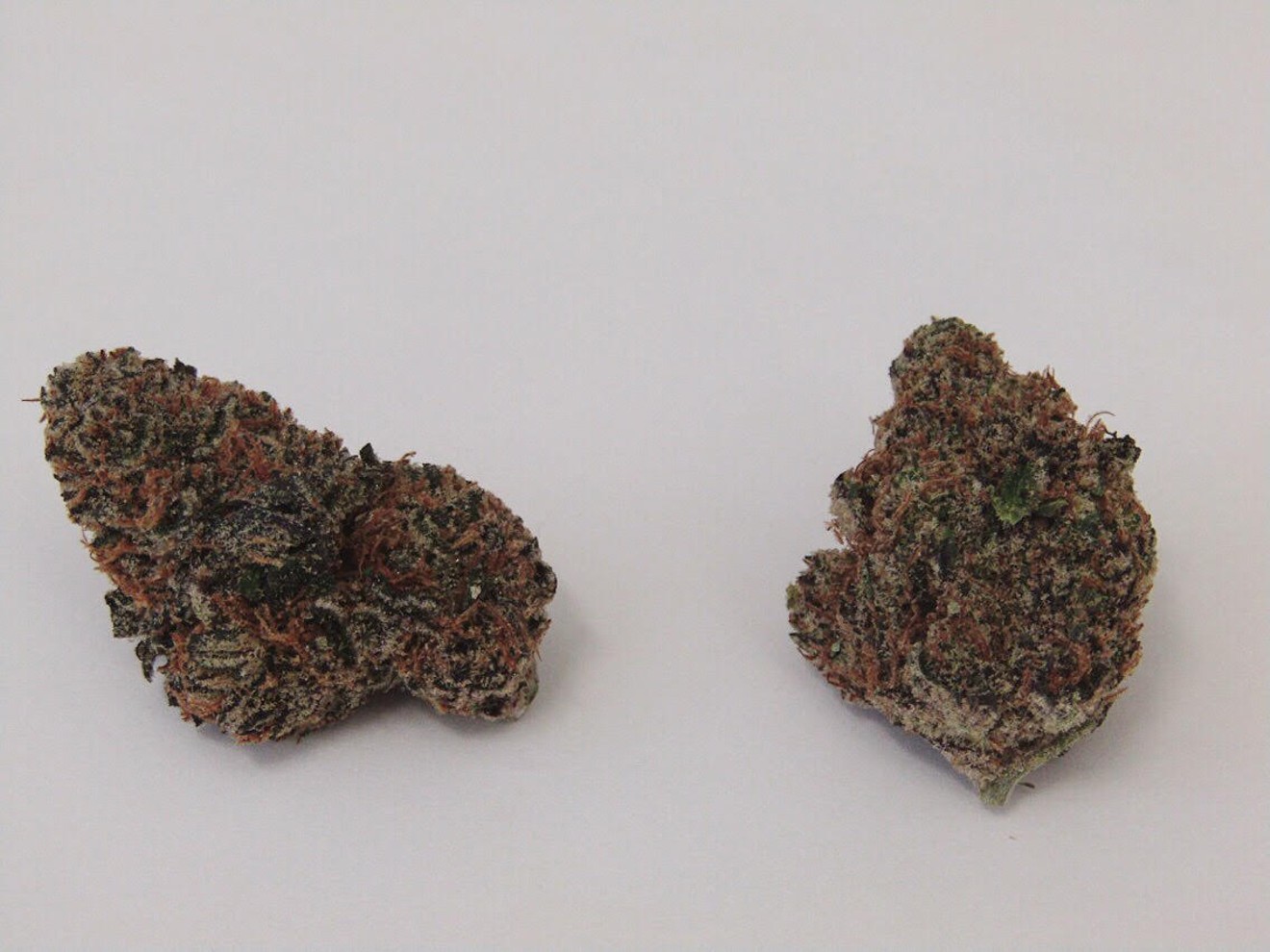 Who's ready to get Funked up? Herbert Fuego
Granola Funk isn’t a jam band that opens for Phish or Umphrey’s McGee, but it might be in the same ballpark. The potent hybrid’s name could easily double as a new genre of yuppie psychedelic music taking over the Front Range, and its characteristics are full of relaxation and nostalgia: perfect for a mid-summer night at Red Rocks.

My love for creamy, cakey strains is well documented, so my wallet can’t come out fast enough when I come across something whose name implies it tastes like a bake sale. Apparently Granola Funk’s moniker comes from a more hippie-dippie background, though: The name refers to a theater crew that attends various Rainbow Family parties around the country. Back in 2006, Granola Funk (the people) came to Steamboat Springs as part of an annual Rainbow gathering and built a pirate ship-style stage during a controversial event now commemorated by this strain.

The strain itself is both funky and sugary-sweet, with a fruity, doughy flavor similar to Froot Loops and vivid purple colors to match. Bred from Girl Scout Cookies and Wookie 15 by Bodhi Seeds, Granola Funk’s striking visual and aromatic qualities make it a top-shelf cut at most dispensaries, and its relaxing, potent effects are gaining a reputation on the West Coast for versatile medical use. Like most of the strains bred from Girl Scout Cookies, it has a heavy THC presence (upwards of 30 percent in some cuts) that can be too much for the lightweight or inexperienced. Pairing it with Wookie, a cross of Lavender and Appalachia strains known for floral and citrus flavors, keeps the potency but enhances the Cookies flavor profile, creating a creamy, tart flavor that reminds users of their favorite childhood breakfast cereal as they zone out to whatever’s on the radio.

Granola Funk is available at a number of dispensaries around Colorado, in both flower and concentrate form. Veritas Cannabis, a wholesale grower, sells its flower to several dispensaries around town, growing a beautiful, stanky cut of the strain that’s sure to impress Cookies fans. Green Dot Labs offers it in the form of live resin, preserving those floral, citrusy and doughy terpenes for an intensely flavorful hit.

Looks: Large, circular and football-shaped buds with a striking contrast of forest-green and dark-purple colors are immediately intimidating, and a heavy coat of milky trichomes adds to the intrigue.

Smell: Sweet, lulling smells of berries and sugar cookies are as clear as they are intoxicating, with creamy scents of lavender and tart, skunky notes jumping in just enough to remind you that you’re smelling weed and not a bakery.

Flavor: Although slightly more earthy and sour than its smell, Granola Funk’s flavor is still packed full of fruity, berry flavors and noticeable aftertastes of dough and lavender. It’s a delicious and well-rounded smoke.

Effects: Although it might be labeled a hybrid, I treat Granola Funk as an indica because of its calming effects on the mind and next-level THC potency. This nighttime and relaxation strain has been used to treat anxiety, stress, eating disorders, insomnia and minor pain.

Home grower’s take: “A Wookie male paired with a Girl Scout Cookies mother, I believe. Beautiful strain, and its looks sort of transcend the grow, unless you really have no clue what you’re doing. I heard of Granola Funk about a year ago, when a friend from Las Vegas put me on to it. Since then, I’ve had buddies in the Bay Area and Portland who have tried it out, and we’ve all gotten plump, purple buds and a creamy lavender flavor. Still not sure how I feel about the high — it’s too debilitating sometimes, and clouds the mind more than I’d like. Hoping someone pairs it with Blueberry soon enough, because that’s an indica I could get down with.”
KEEP WESTWORD FREE... Since we started Westword, it has been defined as the free, independent voice of Denver, and we'd like to keep it that way. With local media under siege, it's more important than ever for us to rally support behind funding our local journalism. You can help by participating in our "I Support" program, allowing us to keep offering readers access to our incisive coverage of local news, food and culture with no paywalls.
Make a one-time donation today for as little as $1.