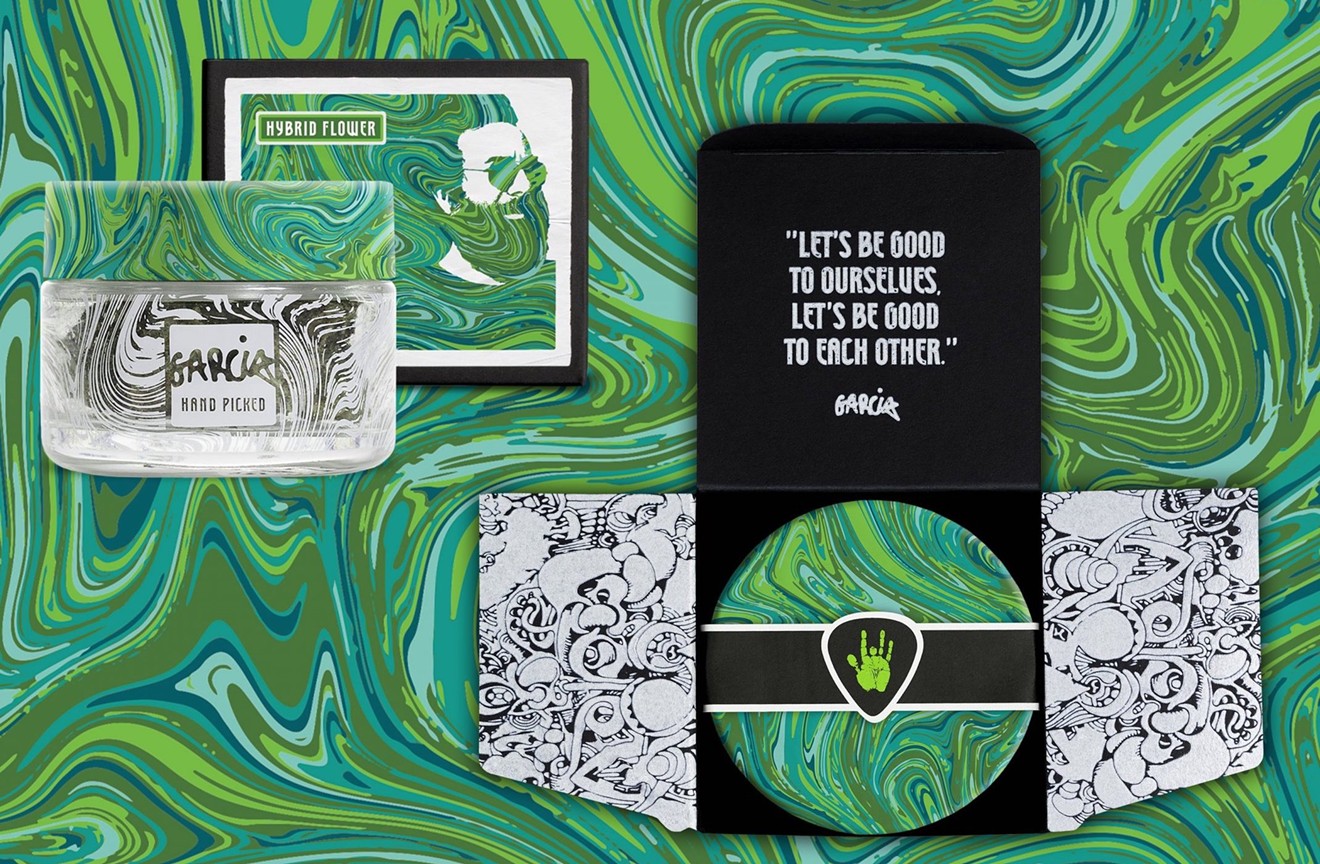 Garcia Hand Picked flower and pre-rolls are now sold in Colorado. Courtesy of Garcia Hand Picked
Almost 44 years after the Grateful Dead played their first show at Red Rocks Ampitheatre, Jerry Garcia has returned to Colorado in a different form.

Founded in partnership with the Garcia family estate and headed by his daughter, Trixie, Garcia Hand Picked debuted in the Bay Area, where the Grateful Dead's bandmembers lived together from 1966 to 1968. But in order to launch in order states, federal prohibition and individual marijuana markets have forced Garcia Hand Picked to either attain a cultivation license or partner with established growers. After successful rollouts in California, Maryland, Massachusetts and Oregon, the Garcia family finally found a Colorado growing partner in Veritas Fine Cannabis.

Now sold in 25 dispensaries across Colorado, Garcia Hand Picked marijuana flower and rolled joints are available in three strains, all of which are named after songs that Garcia wrote: After Midnight (an indica), Love in the Afternoon (a hybrid) and Morning in Marin (a sativa).

To celebrate the new market presence (and what would have been Garcia's eightieth birthday in August), Garcia Hand Picked parked a customized Airstream trailer in the Red Rocks parking lot on the night of a Colorado Symphony tribute concert dubbed "The Jerry Garcia Symphonic Experience."

Back in Colorado last week to celebrate her father's legacy at Red Rocks, Trixie said she was disappointed in the state's lack of licensed marijuana consumption venues or spaces. (Garcia Hand Picked's Bertha trailer was on hand to tout the brand, but no on-site consumption was allowed.)
click to enlarge

“Jerry loved Colorado because of the people. Colorado has long been a mecca for high-minded, freedom-loving nature enthusiasts, and those are our people," she offered in a statement. “It’s crucial to demand and normalize on-site cannabis consumption at as many venues as possible. It’s a very special occasion and major milestone to have Bertha present at Red Rocks for this event. I certainly enjoy a glass of wine, but it’s about time music fans had a choice of what to consume and how to enjoy their favorite artists."

Despite the lack of public places to legally smoke the new product in Colorado (not that it stops anyone at Red Rocks), Veritas president Jon Spadafora believes the new partnership provides a boost to Veritas, which recently underwent a round of layoffs and closed a growing facility as Colorado marijuana prices and sales steadily decline.

Veritas co-owner Mike Leibowitz is a big fan of the Dead, Spadafora explains, making the partnership even sweeter for the company.

"Mike is a huge Deadhead. He came to me about ten months ago all excited and said, 'You'll never guess who I just got off the phone with,'" Spadafora recalls. "For him, this is a dream come true."

Well aware of the vast amounts of Grateful Dead and Garcia-inspired merchandise out there, Spadafora says that Veritas growers picked a few select marijuana varieties before offering them to Trixie, who chose from several phenotypes of each strain.

"For us, it comes down to executing the fundamentals: ensuring we choose strains that are full of terpenes, express our brand and stay consistent with the Garcia vision. We think fans of this genre will see the care we put into it," he adds.

Garcia Hand Picked will be available in more Colorado dispensaries going forward, according to Veritas, but the company says the rollout will be slower than its previous partnership with Bay Area marijuana brand Cookies.
KEEP WESTWORD FREE... Since we started Westword, it has been defined as the free, independent voice of Denver, and we'd like to keep it that way. With local media under siege, it's more important than ever for us to rally support behind funding our local journalism. You can help by participating in our "I Support" program, allowing us to keep offering readers access to our incisive coverage of local news, food and culture with no paywalls.
Make a one-time donation today for as little as $1.