The Mile High 420 Festival takes place at Civic Center Park each year on April 20. Jacqueline Collins
The Colorado manufacturer working with Keef Brands, one of the country's largest marijuana-infused drink labels, has agreed to pay a five-figure fine after allegedly preparing to serve THC-infused beverages at this year's 4/20 festival.

Under an agreement between the Denver Department of Excise and Licenses and Denver Packaging Company, a business connected to Keef that makes the brand's THC-infused drinks, Denver Packaging will pay a $15,000 fine with a $30,000 suspended fine that would be reinstated should the business commit any marijuana code violations or crimes.

According to a show-cause order from Excise and Licenses issued in June, a vendor booth at April 20's Mile High 420 Festival was preparing to sell Keef Colas, Keef's line of THC-infused sodas, to visitors before the event opened to the public. Although Civic Center's annual 4/20 festival celebrates America's unofficial marijuana holiday with a concert and lots of unsanctioned pot smoking, the event is still permitted by the City of Denver, and both the city and the State of Colorado ban marijuana product sales and samples from vendors at public events and on public property. 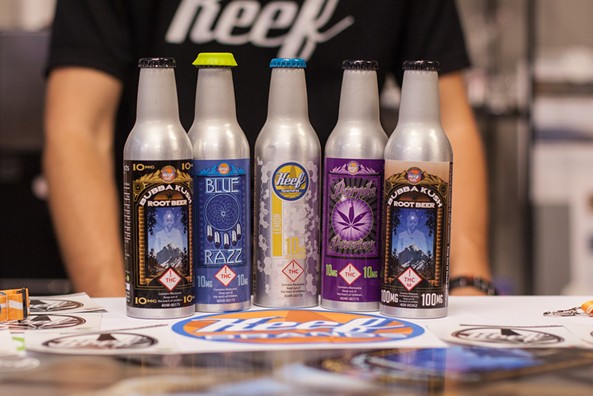 Keef Cola was founded in Colorado in 2010 and has since expanded into other states and countries.
Jacqueline Collines
According to Excise and Licenses, the Keef-branded booth had a sign advertising soda sales to help raise funds for Ukrainian refugees. Inspectors reportedly saw Colorado's THC warning signs, childproof packaging and marijuana harvest batch information on cans that were at an unattended booth, and waited at the booth before eventually reaching Denver Packing Company owner Andrew Veron. The drinks were removed before the event opened to the public.

Denver Packing Company and Keef are different companies, according to Keef, but the two share common phone numbers and connected addresses, and Veron is a co-owner of Keef. Veron was unable to tell inspectors how the THC products had arrived at the event, they reported, suggesting that they came from a dispensary despite not bearing commercial tracking labels. According to the show-cause order, Denver Packaging Company failed to provide a transport manifest for months.

Keef and Veron initially declined to comment on the city's show-cause order; in an email response to an inquiry about the recent settlement, Keef says that the company has "no comment at this time since Keef Brands was not directly or indirectly involved in the allegations or settlement," and that Keef Brands and Denver Packaging are "not the same company or brand."

Keef Brands has become a multi-state marijuana business since launching in Colorado in 2010, offering an extensive line of marijuana-infused drinks and hash oil products. The company's products are now available in seven states, Puerto Rico and Jamaica, but the brand's headquarters remains in Colorado.
KEEP WESTWORD FREE... Since we started Westword, it has been defined as the free, independent voice of Denver, and we'd like to keep it that way. With local media under siege, it's more important than ever for us to rally support behind funding our local journalism. You can help by participating in our "I Support" program, allowing us to keep offering readers access to our incisive coverage of local news, food and culture with no paywalls.
Make a one-time donation today for as little as $1.