Is It Time for Medical Marijuana to Grow Up? 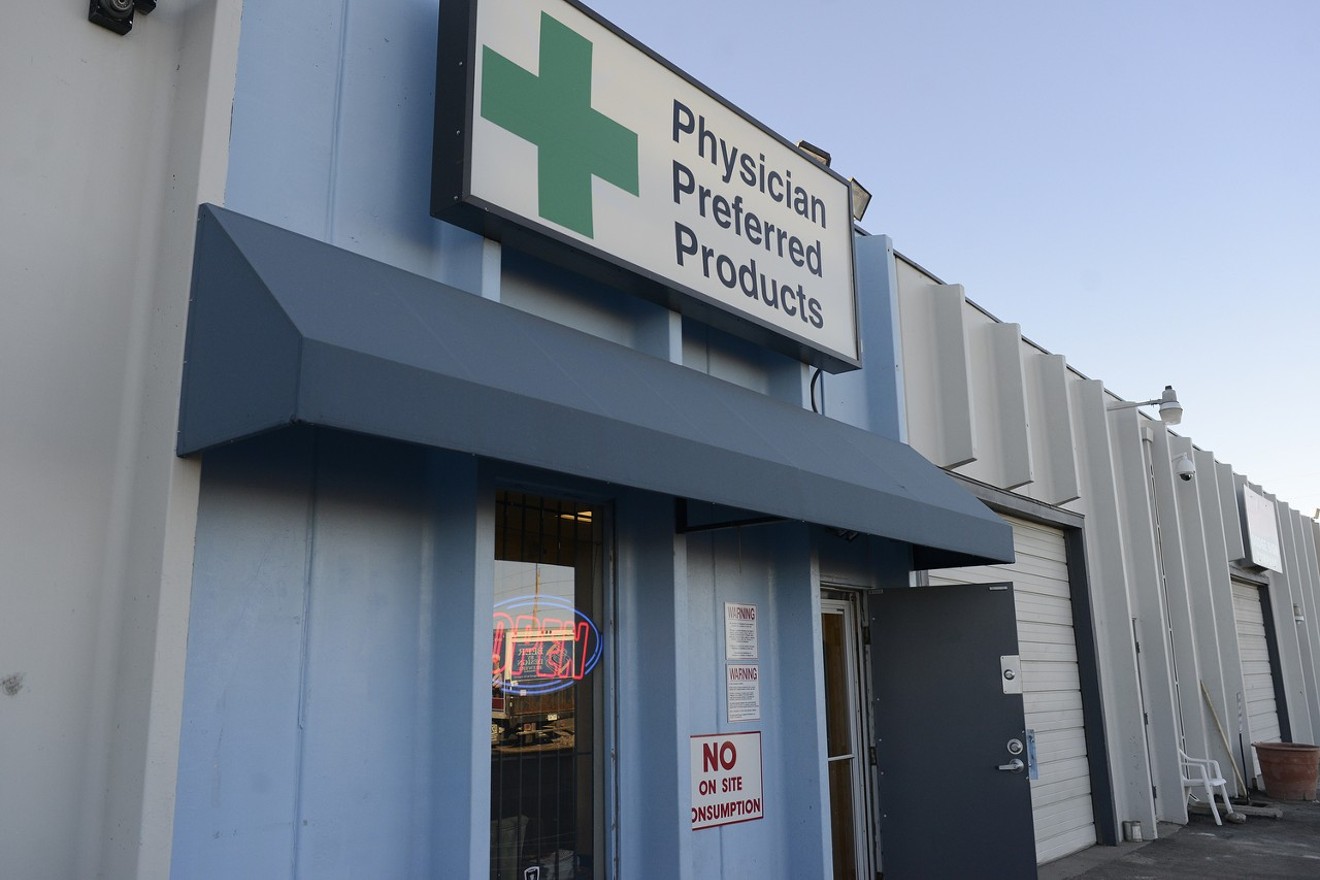 Medical marijuana is going to see a lot of changes if Governor Jared Polis signs House Bill 1317. Scott Lentz
On June 8, the Colorado Legislature passed House Bill 1317, which would add several layers of protocol to medical marijuana recommendations, including a required THC dosage amount and more medical and mental- health reviews. The measure would also expand tracking on patient purchases and require extra doctor approval for patients under 21.

Governor Jared Polis hasn't indicated whether he'll sign the bill, but if he does, a number of changes in Colorado's medical marijuana program are on the way, according to medical marijuana advocates and doctors, who warn that those changes could result in a decline of patients in the state. Still, one influential medical marijuana physician thinks that one aspect of the bill will start an important conversation — even if he opposed its passage.

Jordan Tishler has spent almost a decade as a medical marijuana practitioner, and now directs the Association of Cannabis Specialists while serving on the faculty at Harvard Medical School. While he believes HB 1317 will prove harmful for medical marijuana patients and worries that it could make finding a doctor recommendation more difficult, Tishler thinks it's time that some aspects of the MMJ doctor-patient relationship grew up.

Westword: Do you see states implement and regulate medical marijuana in a similar manner across the country, as we do with recreational marijuana?

Dr. Jordan Tishler: They're similar from a 30,000-foot view, but they get less and less similar as you get closer. Different states allow different types and amounts of products, and they have different testing standards. I think what's embedded in your question, though, is do we need to get past all these different systems and into a national policy? That's something we're spending a lot of time and effort heading toward.

How do you see Colorado's new bill and medical marijuana restrictions lining up with the national policy you'd like to see one day?

I think this bill has some major problems, and it's not something I agree with in its entirety. The fact that the bill has moved on from [the legislature] is as much concerning for me as it is a positive. It wasn't my hope that this bill would come to fruition so much as that it would jump-start a conversation around better elements.

The elements of it that I think are positive are the early sections, where it talks about physicians having to essentially write a prescription that specify what a patient needs to get, how much they need to get, how to use it and when to use it. [These] are things that are sorely lacking in every state besides Florida, oddly enough. This is absolutely essential, because the prescription in the conventional medical world has evolved over the last hundred years or so. It has become a tool that allows us to be very specific about what the patient will get, and it allows us to know the patient got the correct stuff. So if the treatment works or doesn't work, we have some basis of understanding what's going on. Furthermore, it prevents the dispensaries from a lot of unnecessary and inappropriate sales tactics — things like upselling in quantity, deals and specials and side-selling.

I have patients who go into dispensaries for $50 worth of medicine and come home with $400 worth of other stuff that I would've never recommended. Then they'll call me back and tell me it's not working. Right now there is a potential for miscommunication between dispensaries and physicians that harms patients and undermines their therapy. A prescription is how we get past that. I think that portion of the bill is a great aspect, and a part I wanted to highlight.

Dispensaries, both medical and recreational, need to stop giving medical advice. They need to stop telling people that such and such product is good for a medical problem. Now if someone walks into a dispensary and says, "I'm having a few people over and I'm cooking branzino. What do you have that works well with that?" — I have no issue with that. But if someone walks in and asks what's good for a backache, I think dispensaries need to have a clear regulatory mandate that makes them respond with a list of health-care providers who can help with that. That's what happens at a pharmacy, and it's the only way to get patients what they need.

Some attorneys and patients have brought up a legal argument that adding dosage and consumption rules to a medical marijuana recommendation makes that a prescription, and doctors with prescription power must register with the Drug Enforcement Administration, which doesn't allow prescribing Schedule I drugs.

I think it's absolutely bunk. Part of this is a history lesson. Medical cannabis was started back in California in 1996, at a time when the country's approach to cannabis was very different than it is now. At the time, the DEA was threatening physicians with the loss of their prescribing rights, so California's attempt was to say that doctors won't prescribe this, but in their opinion, the benefit outweighs the risks for patients. Arguably, that's not a tenable or ethical point of view, but it was the best they could do at the time.

Now we move forward, and the reality is that the federal government doesn't own prescribing. Prescribing existed long before any federal entity had jurisdiction over it, and there have been a number of cases that affirmed the physician's right to be specific and have a discussion with their patient within the privacy of their offices. Being specific about products and their details is not illegal, and we need to recognize that not doing those things violates informed consent, which is fundamental and legally mandated through Supreme Court precedent. Point being, if the physician is not specific with the patient and doesn't discuss what they need, how to use it, what the side effects and benefits are and all those things, then the physician is remiss in their duty to complete the "informed" part of informed consent. I'd also point out the DEA hasn't punished a physician for that in over ten years.

You mentioned the bill has some major problems. Where do you think those problems are?

There are a number of other issues in the bill. If I were king, I'd say each bill should only have one issue, and there are a lot in here. The issues I have here are those surrounding concentrates and those surrounding young adults, aged eighteen to twenty. I think that requiring two pediatricians or physicians for patients eighteen and lower sounds deceptive, too, and leads to significant barriers of care. For example, in Massachusetts, there was exactly one pediatrician in the entire state who was willing to evaluate and certify child patients for medical marijuana — and he retired. At the moment, there is no one in a state of five million people to do it, and that's a problem.

Putting guardrails to make sure physicians are doing the right thing is an issue for the board of registration in each state. If someone felt pediatric patients were given cannabis without the appropriate evaluation, the state would start a review process to see if appropriate medical standards were upheld. Mandating ahead of time that there is the confluence of two physicians or pediatricians, though — I think that makes things tougher than necessary.

From a medical point of view, it's very clear that eighteen- to twenty-year-olds are closer to the pediatric side of things than the adult side of things on a neuro-development scale, but we draw a line at eighteen and deem that to be an adult in most cases, including health care and a need for privacy and autonomy. It doesn't make sense to strip that autonomy from that age group, statutorily. If people are being mistreated by unscrupulous physicians  — and I acknowledge they exist — the appropriate thing is to not pass a new law, but use the laws that exist to examine the physician's actions and govern behavior for an examination of the circumstances.

Do you see other states with similar medical marijuana programs to Colorado's following suit and enacting restrictions?

That's an interesting question, but I don't know the answer. It could. If those two sections become law, this is not going to accomplish anything positive. It will make life harder for a lot of people. However, I think it doesn't create enough positive change for other states to emulate, unless those states do it based on the theoretical, and not what's actually happening. You'd think other states would be smarter than this.
KEEP WESTWORD FREE... Since we started Westword, it has been defined as the free, independent voice of Denver, and we'd like to keep it that way. With local media under siege, it's more important than ever for us to rally support behind funding our local journalism. You can help by participating in our "I Support" program, allowing us to keep offering readers access to our incisive coverage of local news, food and culture with no paywalls.
Make a one-time donation today for as little as $1.