The Clinic's location in West Highland sits in one of the hottest home-buying neighborhoods in Denver. Scott Lentz
Colorado's decision to legalize recreational cannabis has taken the blame for several changes to the state's rapidly changing landscape, specifically in Denver. Pot has been accused for the rise in population, the rise in homelessness and the rise in housing costs...and now one study believes it has found a solid connection to the increased cost of homes.

Researchers from the University of Wisconsin Madison found that Denver home prices in the immediate vicinity of a recreational marijuana dispensary have risen at a fast pace since retail sales were legalized. By comparing Denver home prices from 2013 with home prices in 2014, the first year of retail pot sales, researcher Moussa Diop and her team determined that single-family homes within 0.1 miles of a dispensary saw an 8.4 percent increase in price. Homes in Colorado municipalities that had legalized retail sales saw a 6 percent increase in the same time frame.

“The presence of retail marijuana establishments clearly had a short-term positive impact on nearby properties in Denver,” says Diop, an assistant professor of real estate and urban land economics at UW Madison. “This suggests that in addition to the sales and business taxes generated from the retail marijuana industry, municipalities may experience an increase in property taxes. It’s an important piece of the puzzle as more and more voters and policy-makers look for evidence about the effects of legalizing recreational marijuana."

The average property-value increase for homes within 0.1 miles of a dispensary was $27,000 higher after legalization, according to the study. However, it also identified some underlying factors that may have increased property values in vicinities closest to dispensaries, including lower crime rates, additional amenities nearby and a surge in housing demand because of Denver's growing marijuana sector. A study by Leafly found that Colorado's marijuana industry had created 23,407 full-time jobs as of January 2017, and Denver crime as a whole decreased by 6.9 percent from 2013 to 2014 (though it's risen every year since).

A local real estate broker and data analyst thinks the underlying factors actually increased home prices more than the excitement of living next to a pot shop did. Greg Eckler founded his real estate agency, Denver Realty Experts, in 2013, the same year chosen for the start of the study of Denver home prices. He thinks many homebuyers in Denver's hot neighborhoods move there for something he calls the "Starbucks effect," which is when people move to an area for a coffee shop, strip of restaurants or other specific amenities. Eckler doesn't believe a dispensary carries the same pull, however.

"Let's say rises were 6 percent, and a dispensary comes in, and the rise goes to 8 percent – I don't think you could prove a direct connection," he says. "I've had people ask about living next to shopping, restaurants and coffee shops, but I've never had people ask to live next to a dispensary." 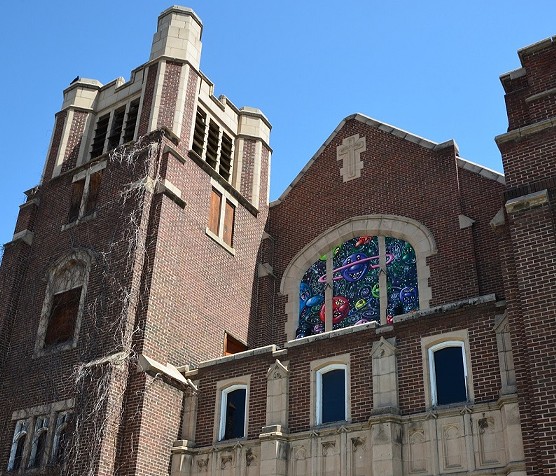 The International Church of Cannabis opened its doors in the West Washington Park neighborhood in April, and many residents haven't been happy about its presence.
Lindsey Bartlett
Based on his experiences with friends and clients, Eckler says home buyers in areas like Bonnie Brae, Lower Highland and West Washington Park still largely prefer to keep their cannabis consumption discreet, and don't necessarily want a dispensary nearby. "Take the five highest-priced neighborhoods in Denver – West Washington Park, Bonnie Brae and so on. If you throw a dispensary in there, you'd have an uproar. In Stapleton, you'd have the same thing if you put one in the town center. People of high income don't want it next to their kids; there's still a stigma attached to it."

Along with Portland and Seattle, Denver consistently led United States metro areas in annual and monthly home-price increases even before legalization in 2014, and the rate hasn't slowed down much since, even as more states legalize recreational marijuana. According to a joint announcement from property assessors in metro Denver, home prices rose by 20 percent from April 2016 to April 2017 in a majority of the municipalities around Denver.

"It's kind of a self-fulfilling thing. The neighborhood prices were already rising," Eckler explains, pointing to a supply shortage in Denver real estate as the real cause for the city's rising home prices. "Out of sight and out of mind is a good thing in real estate. In east Stapleton, [a home] is worth less if you can see the jail out there than if you can't. Same thing goes for a dispensary or the rough parts of Colfax."

Still, at least some of those 23,407 new full-time jobs were given to people who didn't previously live in Denver, and Eckler doesn't discount that. Denver County's population grew by nearly 50,000 people from 2013 to 2016, according to the U.S. Census Bureau.

"I think marijuana as a whole has raised prices on different fronts," Eckler concludes. "People are moving here in droves. Some were going to move here anyway, while others are moving here because of marijuana."