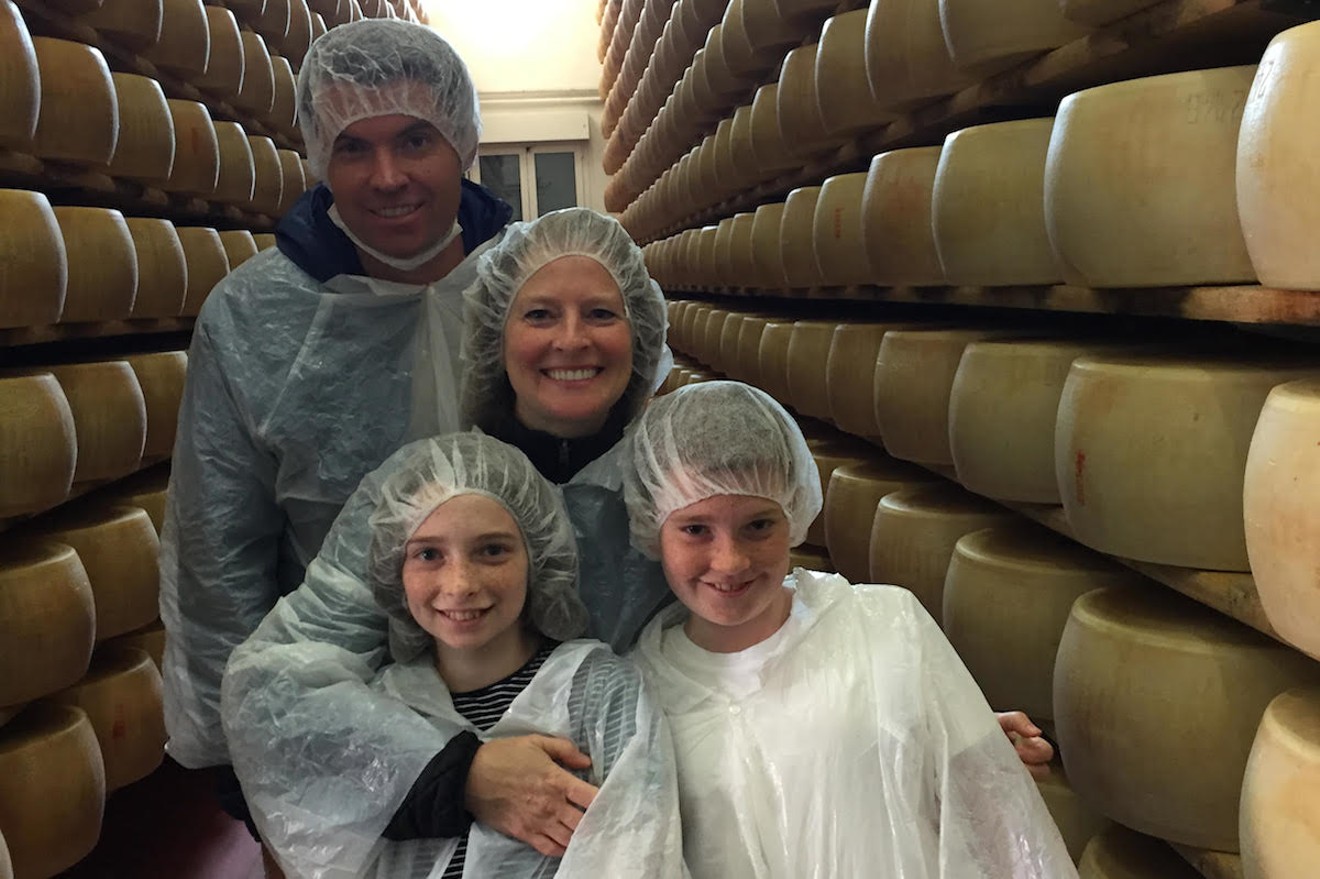 Matthew Kind and his family have visited nearly a dozen countries since 2016, such as this trip to Parma, Italy. Courtesy of Matthew Kind
Matthew Kind can't do many interviews past noon. Next month, he might have to shut off even earlier, depending on which time zone he's in. Such restrictions are usually avoided by talk-show hosts, who stick closely to standard production deadlines in order to consistently churn out content. Yet Kind's ever-evolving itinerary is exactly why he chose this line of work.

The host of the CannaInsider Podcast and his family of four have lived in nearly a dozen countries throughout Europe and North America since 2016, thanks largely to a substance that would get him arrested at most international borders: His weekly podcast, which he hosts remotely with the help of his wife, Bethany, focuses on business and industry trends in cannabis.

The couple also operates a consulting firm for companies involved with legal pot, and provide Amazon consulting services as part of their digital nomad lifestyle. While technological flexibility makes that lifestyle possible, it's really dependent on a growing global interest in cannabis.

Kind (and no, that's not his given name) started his podcast in 2014, after a career in e-commerce and moving his family to Boulder. But he soon realized that he could broadcast from anywhere. "In 2016, our lease was coming up, and we just decided to put our stuff in storage  — the kids had already started home-schooling — and just go," he remembers. "We thought it'd be for about a year. It's been two and a half."

So far, the Kinds have traveled to Mexico and throughout Europe, including trips to the Czech Republic, France, England, Portugal, Austria, Italy, Spain, Scotland and Poland. They've also traveled through much of the American South, including Florida, Kentucky, the Carolinas and Georgia. Matthew Kind and his children, Charlie and Madeline.
Courtesy of Matthew Kind
It's not just a vacation, though: Matt is expanding his cannabis education in Europe. He's visited a Czech university in Prague that studies CBD derived from hemp, researched Germany's growing demand for medical marijuana, checked out Spain's interesting approach to cannabis consumption clubs, and learned about the growing shift toward pharmaceutical cannabis products from gray-market weed in the Netherlands.

His most interesting experience, however, came in Portugal, where all drugs are decriminalized but largely unregulated. "It's still really fragmented abroad," he explains. "All drugs are decriminalized in Portugal, so you can get pretty much anything out there. It's all black-market stuff, though — which is different, even from Amsterdam, where they're pushing for more pharmaceutical-grade."

"Cannabis is definitely going global now," he continues. "I pick the most interesting people who are doing the most exciting things in cannabis, and then I talk to them. If they're really interesting, I'll bring them on the show. This is what I did in Boulder. I was just calling people all day long, getting little snippets of their ecosystems."

The time-zone differences haven't created much of a hurdle, since calendar apps handle interview schedules "without all the emails waiting for you after you wake up because everyone's still asleep in America," Matt says. They also haven't stunted the growth of the podcast, which reaches 50,000 listeners a month, he adds.

As a result of their travels, the Kinds have been able to provide a rare upbringing for their children, eleven-year-old Charlie and thirteen-year-old Madeline. The children have gone to summer camp in Scotland for the past two years, visited famous World War II sites in France, toured the ruins of concentration camps in Poland, and studied the Spanish colonial architecture of San Miguel de Allende, Mexico. Other than a couple of trips to Chicago to see family during the holiday season, the Kinds haven't been in the United States for almost two years. The Kind family on the road.
Courtesy of Matthew Kind
Life on the road is "both amazing and challenging," Bethany says. "Amazing because we've been exposed to such amazing people, places, languages, cultures and foods that we never would have experienced, and challenging because we have to get up and go every month or two and learn a new landscape and culture. I don't think that being in these exciting places has been distracting, but rather has enhanced our learning, in that we get to experience so much of our world's history and culture hands-on and in living color rather than reading about it in a textbook and daydreaming about it."

The Kinds haven't shied away from educating their children about cannabis, although Charlie and Madeline haven't asked many questions yet, Bethany notes. But with their father hosting a weekly podcast about the plant and even offering a cannabis-focused scholarship to college students in 2017, the topic is likely to start coming up more often.

"Matt and I try to be very open with our children, and are happy to answer any questions that they may have, which right now are not many. Legalized cannabis, just like alcohol or any other substance, is a topic that we do not take lightly when it comes to educating our children," she says.

The Kinds don't have any plans to end their international journey yet; they're currently in Paris, meeting people both inside the cannabis community and in their neighborhood. "It's comforting getting to know your local baker and grocer where you're living, even if it’s only for a month or two. It's also made us realize how important community is, and making friends no matter where you are," Bethany says. "We definitely could not have had this experience without the flexibility of Matt's work, including the podcast."
KEEP WESTWORD FREE... Since we started Westword, it has been defined as the free, independent voice of Denver, and we'd like to keep it that way. With local media under siege, it's more important than ever for us to rally support behind funding our local journalism. You can help by participating in our "I Support" program, allowing us to keep offering readers access to our incisive coverage of local news, food and culture with no paywalls.
Make a one-time donation today for as little as $1.