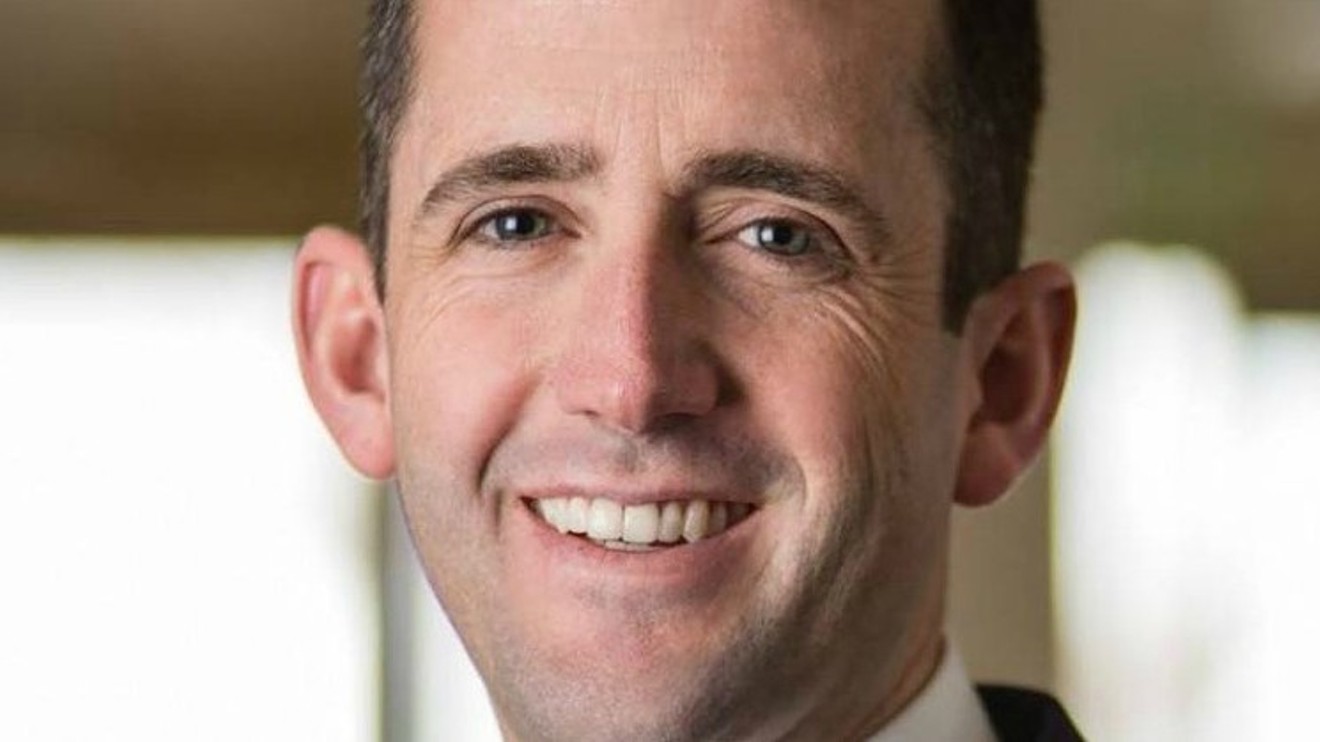 "I don't see how this is going to make American great again," Smarter Approaches to Marijuana president and keynote speaker Kevin Sabet said during his talk on the dangers of legalized cannabis. "At least we got rid of drug dealers. What are they all doing now — going to dental school?"

The symposium, Marijuana's True Impact on Colorado, isn't hiding its intent. Although it will conclude with an independently moderated debate between Centennial Institute director Jeff Hunt and cannabis attorney Rob Corry, the keynote speakers and the symposium sessions are definitely anti-cannabis commercialization. Over 200 people from Denver, Pueblo, Colorado Springs and even Georgia are in attendance, collecting tips on how they can fight back against a state and collection of lawmakers they feel have largely ignored them.

SAM President Kevin Sabet.
Courtesy of Smart Approaches to Marijuana
Hunt, who has started a petition to ban the Denver 420 Rally and published an op-ed in USA Today condemning Colorado's choice to legalize retail cannabis, had three goals when he created the symposium. "First, I want to better educate people about what's happening from commercialization," he told me. "I also want to create bonds that get people to work together. We've been working independently before this."

Individuals and groups opposing pot legalization haven't achieved a constructive level of unity, according to Hunt, who organized the event in hopes of rallying support to fight back against the cannabis industry. With more troops on board, Hunt hopes to achieve his third goal: placing guardrails on Colorado's industry and stopping cannabis commercialization in its tracks so that it doesn't reach the rest of the country.

Many of the discussion topics at the event have similar titles to cannabis industry and advocacy seminars; the tone, attitude and solutions discussed are virtually the opposite, however. Social health effects, edibles packaging, the amount of revenue created, the endocannabinoid system and homelessness are all part of the focus, but the narrative is much more morose and alarming than at an industry mixer.

Centennial Insititue director Jeff Hunt.
Colorado Christian University
Frank McNulty, anti-commercialization lobbyist and former Speaker of the House in Colorado, said that he and his colleagues are outnumbered by pot-industry lobbyists and firms nearly four to one, but he still believes Coloradans have something to fight for.

"Up until this last legislative session, it wasn't a battle. The industry had sway," he told the audience. "There is no doubt in my mind that the recreational marijuana industry has significant power with state senators." According to McNulty, a bill passed last session that limits the number of plants Coloradans can grow at home is the first legislation to successfully overcome industry opposition; the Marijuana Enforcement Division's rule against fruit- and animal-shaped edibles is long overdue, he added: "I presented a bill like that three years ago," he said. "We could've done it then."

The symposium hasn't completely disregarded some of the plant's medical benefits. Several speakers, including Sabet, said that CBD medication should be available to children suffering from epilepsy and frequent seizures — but added that the thought of half-ounce joints and potent concentrates like wax and shatter being presented as medicine was hypocritical.

"I"m not going to throw the baby out with the bathwater here. I'm not a nihilist about this. The science is there that there's a potential benefit," pain medicine doctor Dr. Ken Finn said. "But I want a purified, developed product instead of this free-for-all."

Finn is based in Colorado Springs, where more medical patients reside than in Denver and only medical marijuana dispensaries are allowed. He'll recommend medical cannabis for terminally ill patients, he said, but added that he's noticed a trend of patients exaggerating symptoms when they ask for a medical marijuana card. Marinol, a synthetic alternative to THC and the only cannabinoid approved by the U.S. Food and Drug Administration, is available for patients, "but nobody has ever asked me for Marinol," he noted.

Other topics covered at the event include marijuana's impact on youth, the industry's responsibility, how marijuana affects homelessness and how law enforcement deals with black-market activity. The symposium will continue until 3 p.m. today, when it will be followed by a ninety-minute debate between Hunt and marijuana attorney Rob Corry.