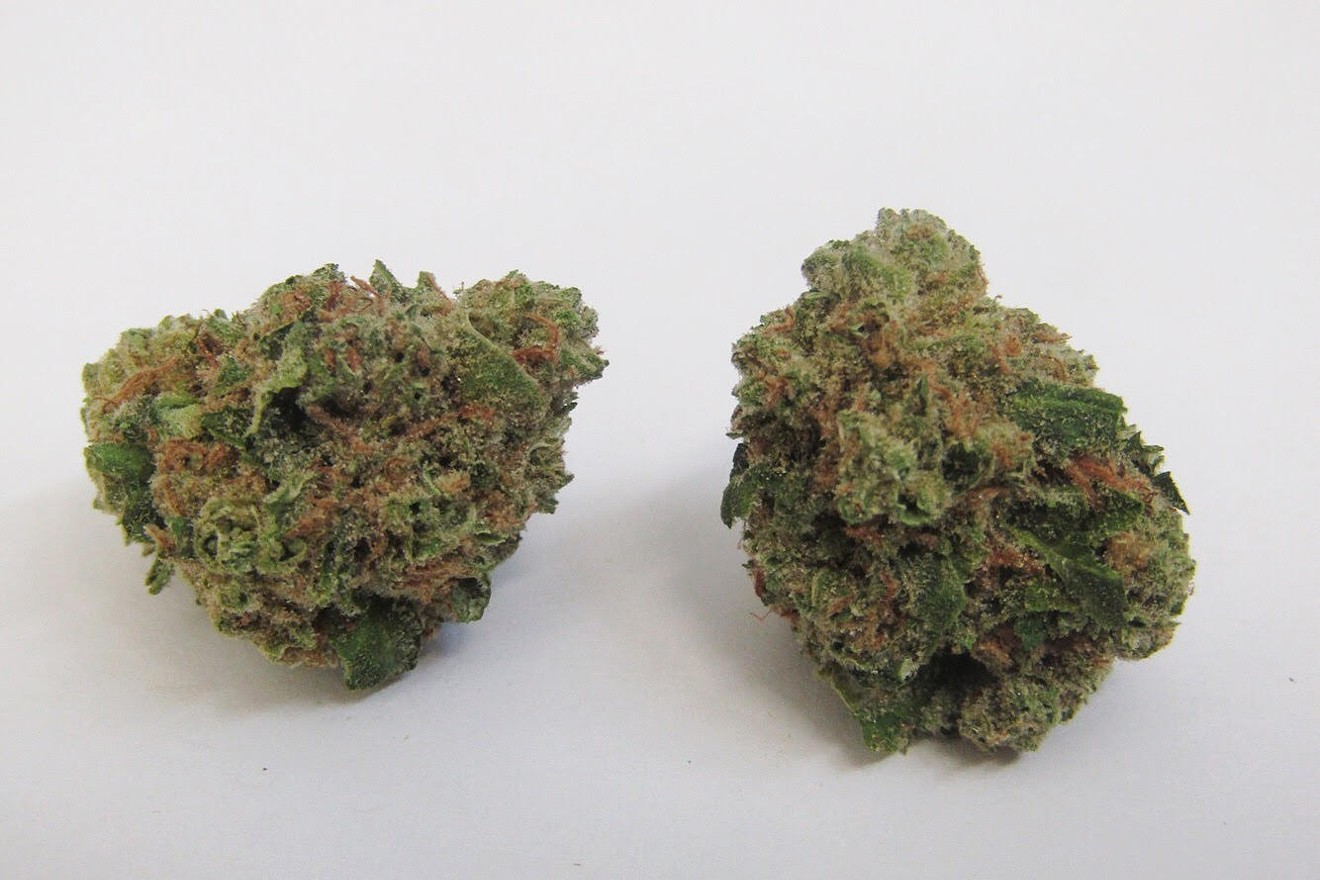 Break off a chunk and enjoy. Herbert Fuego
Pineapples have become too trendy. Don’t believe me? Go to a Target or H&M and you’ll find button-up shirts, shower curtains, cups, underwear and loads of other generic shit decorated with little pineapples. The same people are also abusing cacti — though they probably don’t even know that word and just call them “cactuses,” which is fucking wrong.

I refuse to let commercialization destroy my love for all prickly plants, including cannabis (anyone who’s trimmed weed knows how prickly trichomes are). Hit by full empathy for all three during a dispensary pit stop on my way home last week, I bought an eighth of Pineapple Chunk in the hopes of enjoying a relaxing evening.

A Dutch import from Amsterdam breeder Barney’s Farm, Pineapple Chunk carries more substance than flash compared to Pineapple Express, another example of industry exploitation (and iffy genetics from dispensary to dispensary) playing off Hollywood hype. Barney’s bred the hybrid strain with a Pineapple phenotype and cross between Cheese and Skunk #1, giving it a middle-of-the road high that can take users either direction, depending on their tolerance and energy level before the session. Whichever way it takes you, be prepared for a long ride.

Every chunk I’ve ripped off this Pineapple has put me down inside of an hour, keeping my head and eyes foggy the entire way. However, I’ve heard of the strain giving some users a youthful spark of energy, or an up-and-down roller-coaster ride. Be mindful of those teetering effects when trying Pineapple Chunk for the first time — and make sure you have a clean palate to enjoy the spread of flavors.

Looks: Pineapple Chunk’s buds are circular and cone-shaped, and look like a bunch of sticky green thumbs, pebbles or footballs. These dense lime-green nugs have mauve fan leaves and occasional light-purple spots, with peach pistils and moderate trichome coverage.

Flavor: Anyone who enjoys a good charcuterie board or fruit-and-cheese plate will enjoy Pineapple Chunk’s flavor profile. It’s full of thick, cheesy notes followed by a rush of rubbery pine and tart acidity. The sour fruitiness and cheesy funk would be enough on their own; consider the earthy pine flavor the gravy.

Effects: Although Pineapple Chunk’s smell and flavor are easy to distinguish, its effects are much harder to identify. It drains my energy and focus after a short initial jolt, then increases my appetite past the point of gluttony. Other users experience a more uplifting high, but one lacking focus. Both highs are long-lasting and usually require sleep to fully shake off. Medical benefits include treating anxiety, stress, eating disorders, minor pain and headaches.

Home grower’s take: “Clones of this are out there, but I’ve never come across them in Colorado. You can try for seeds, which I have. Pretty sure they all came from overseas, though. That kind of sucks, because I like the flavor and high of this way more than Pineapple Express. It’s cheesy , sweet and sour in the grow and in my mouth. It also gives me some good, blind energy before a bike ride. I really wish it were easier to find around here, because it’s a good strain in the grow, too. Those Cheese and Skunk genes make it tough against mildew. You can pull it down after eight weeks if you want, too.”