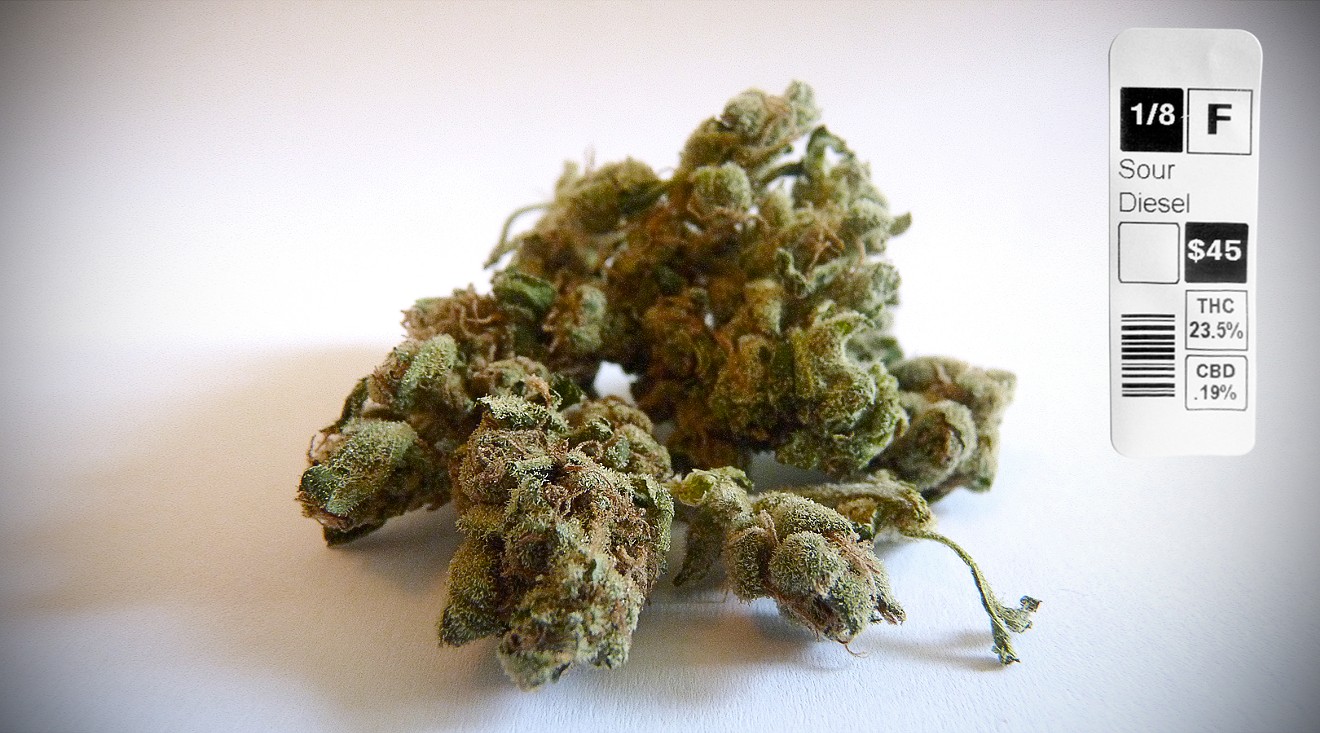 Sour Diesel's place in the strain hall of fame is secure, but how relevant is it today? Flickr/Furvert 101
I’ll never forget the first time my parents accused me of smoking weed. I thought I’d done everything right: My teeth were brushed, my eyes were clear and my shirt was fresh. The giveaway wasn’t how I looked, though, my old man later told me. It was the gas fumes coming out of my bedroom.

Trying to contain Sour Diesel’s skunky, sour aroma of gas and tennis balls with a few Ziploc bags is like taking on a charging rhino with a slingshot. Every doe-eyed pot smoker discovers this eventually, and it was Sour Diesel that enlightened us.

If you compare strains to beer, Sour Diesel is a Pilsner. Smooth, refined and consistent, and top of the list for our desert island stash. But Sour Diesel is also finicky in the grow, notoriously susceptible to powdery mildew, and it doesn’t yield a lot of weight compared to some of today’s resin-covered heavyweights, which can smell damn good in their own right.

Built on a loose, old-school bud structure and lacking the frosty trichomes of its modern counterparts, Sour Diesel has become harder to find in Denver over the years as users trend toward newer, sexier strains.


Nearly every dispensary had an in-house cut when recreational stores first opened in 2014, serving as a standard for judging grower against grower. Since then, though, the go-to defining strain has gone from Sour Diesel to Blue Dream to Gorilla Glue to Girl Scout Cookies to GMO to who gives a hoot, because none of the new kids will bring a smile to a longtime grower’s face like Sour D.

“I still think it’s one of the best strains we have,” says Veritas Fine Cannabis co-founder and longtime cannabis grower Mike Leibowitz. A New England native, Leibowitz remembers his reaction to Sour Diesel’s energetic, clear-minded high in the ’90s.

“We were smoking a lot of Skunks at that point, and I was getting tired of them. But then Sour Diesel comes along,” he recalls. “It was so potent, but in a different kind of way — more uplifting. It wasn’t making you go straight to bed, and that was new back then.”

Sour Diesel’s backstory and genetics are a little hazy, but it’s generally accepted as having a Chemdog influence, and rose to fame on the East Coast over two decades ago before eventually ending up in the hands of California growers. The strain has trademark fluffy lime-green buds and fan leaves that look like bits of dark-green paper, and an even more recognizable smell and taste. The effects, right out of a euphoric cup of coffee, make for a quintessential daytime high. When medical marijuana dispensaries began opening in Colorado in 2008, Sour Diesel was one of the first plants that a grower would choose. 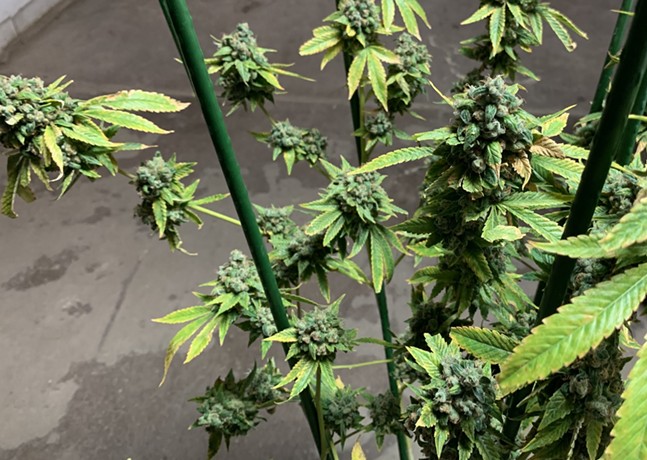 Sour Diesel's open bud structure and vibrant colors are easy to recognize.
Thomas Mitchell
Although he says he’s been able to garner a good yield from the strain, Leibowitz says that Sour Diesel takes longer to bloom than most strains and “has a lot of challenges” compared to other cannabis varieties. Despite being one of his favorites at the company, Sour Diesel doesn’t gain as many new fans as it used to, either, he notes. And for all the passion and love they put into the plants, growers still have to run a business.

“There are so many flavors of the week and month that are legitimately awesome. I’ve grown Sour Diesel for a long time, so I get why people would look at Orange Zkittlez or some form of Cookies, but for me it’s one of the top strains in the world,” he says. “No one is bragging about breeding with Sour Diesel, though, because that’s what they did eight years ago. If you’re coming out of the gate as your own flower company right now, you’re probably not leading the news with Sour Diesel at this point.”

New growers trying to make a reputation for themselves have to weigh more than popularity when picking out strains or breeding lines, too. Malek Noueiry, founder of wholesale cultivation Malek’s Premium Cannabis, says he works to balance commercial factors such as yield, potency, pathogen resistance and flowering time when picking out strains to grow, and cannabis breeders have been matching strains to maximize those characteristics. Taking Sour Diesel’s gassy qualities into consideration and matching it with a sturdier strain has been done before and will be done again, but that can dilute the original appeal, Noueiry says.

“That’s why a lot of stuff has been hybridized over the years — to make it grow better in certain conditions. You’ll find easier-growing plants that yield a little better and are more resilient to pathogens and problems than Sour Diesel,” he explains. “A lot of commercial grows need to hit numbers to pay the bills, but that can drown out some of those original qualities you look for.”

A Sour Diesel lover since 2002, Noueiry first bought an eighth of the strain for $75 while living in Texas. He’s been a fan ever since, but waited a few harvests before introducing Sour Diesel into his commercial lineup as his company worked to reach new cannabis customers, many of whom weren’t buying weed twenty years ago (but are still willing to pay the same prices for colorful packaging). According to Noueiry, most new users don’t immediately learn about Sour Diesel like they might have six or seven years ago.

“We’re in this battle of everyone trying to update their menus, keep things fresh and appease the masses. The less educated customer who follows what’s being marketed on Instagram might think Sour Diesel is old or played out, but it’s not,” he says.

Inside the grow at L'Eagle, where old-school strains have a loyal following.
Thomas Mitchell
With the challenges and time involved with growing Sour Diesel, growers who don’t have a personal connection to the strain might not feel the need to keep it around. Noueiry admits that if it weren’t for his interest and nostalgic connection to Sour Diesel, he’d probably be growing “whatever is hot” right now, while pointing out that other popular strains from decades past, like Grand Daddy Purple, Headband or Orange Kush haven’t held on the way Sour Diesel has.

Some dispensaries have built followings based on their ability to grow older strains, however. L’Eagle, a Denver pot shop founded by John and Amy Andrle in 2010, still sells strains like Hindu Kush, Grape Ape and Strawberry Cough. Never sold on discount and occasionally limited to an eighth per customer, Sour Diesel is the store’s most popular strain, according to John.

“We never take it off the exclusive shelf. We never run it on special. People get it, and they’re willing to pay that premium,” says L’Eagle store manager Rob Hamman. “For the people who are tried and true, they’re still going to be attracted to that. It’s an awesome strain to smoke. To grow, it’s not so awesome, and that scares some dispensaries away.”

Other growers are trying to keep Sour Diesel’s legacy and genetics intact while taking a new approach. Lama Brand Cannabis founder Tony Karas cuts his Sour Diesel down in two months instead of ten weeks, and says he hasn’t noticed any compromise on yield or flavor. The yield and overall THC content still falls short of more trendy strains like MAC and Papaya, though.

THC potency isn’t always the most important ingredient in good weed, Karas argues. Caryophyllene, myrcene and limonene, the plant terpenes responsible for Sour Diesel’s strong smell and flavor, are just as important in the recipe. Even as cannabis names and flavors shift away from the gas station and toward the bakery, he believes that regular users, new and old, always gravitate to the fumes eventually.

“The OGs who’ve been around forever, they’ll always respect Sour Diesel, and that’s what they want to keep smoking,” Karas says. “That gassy profile is what I love most. Exotics are hot shit right now, but Sour Diesel is a classic.”

Trends come and go, but classics are eternal.
KEEP WESTWORD FREE... Since we started Westword, it has been defined as the free, independent voice of Denver, and we'd like to keep it that way. With local media under siege, it's more important than ever for us to rally support behind funding our local journalism. You can help by participating in our "I Support" program, allowing us to keep offering readers access to our incisive coverage of local news, food and culture with no paywalls.
Make a one-time donation today for as little as $1.