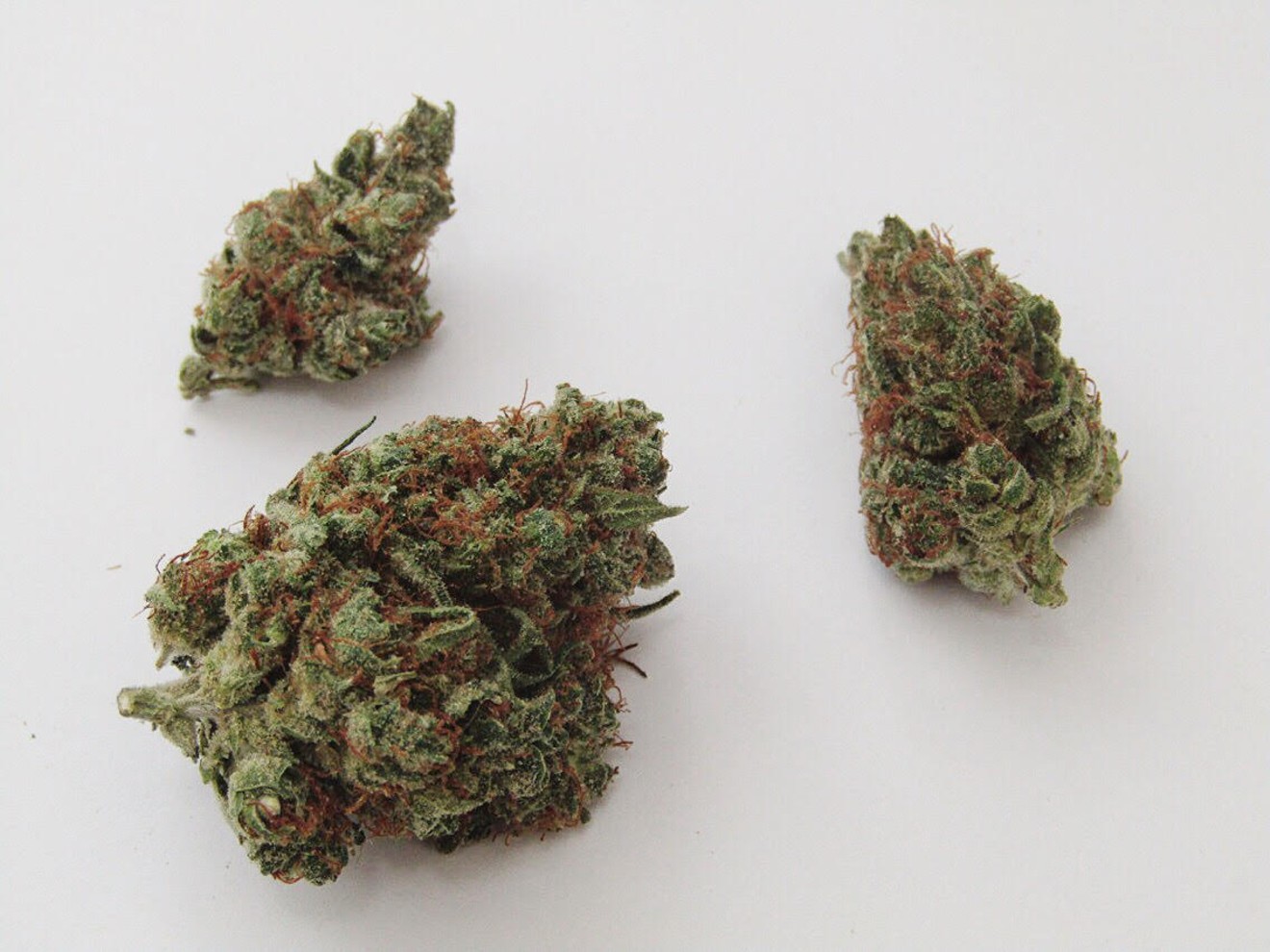 Why the sour look? Herbert Fuego
Too much of a good thing can quickly become a bad thing. Nitro coffee and milk, for example: It’s a delicious concoction that will leave me strung out like Sheila from Friday after more than a few drinks. Certain sativas often act like nitro coffee in a weed jar, which is why Sour Tangie — a combination of sativa powerhouses Sour Diesel and Tangie — was one of the more intimidating strains I’ve encountered of late.

I’ve always enjoyed Sour Diesel for its amiable high; its classic scent is a close second on my list of favorites. Despite the high’s potency and long-lasting effects, if not overdone it brings bountiful energy without the jitters, and a whiff of that nostalgic, rubbery funk is like hearing a favorite song from childhood. Tangie is newer on the scene, with a heavy tangerine flavor and crashing high that can be way too much in large doses. The combination of the two had me worried that the strain would be an orange-heavy version of Durban Poison, a classic sativa with an amazing flavor but a racy high that nosedives into a nap after the peaking point.

My fears about Sour Tangie’s high were only slightly realized, as two bong rips gave me enough energy to start multiple chores around the house — but not enough focus to finish any — and my body started leaking energy like the Exxon Valdez within two hours. The high was still much more relaxed on the brain and body than Tangie’s, though, limiting aches and anxiety after a long day’s work. Its taste, while strong, wasn’t overpowering in any single facet, combining Tangie’s heavy orange influences and Sour Diesel’s skunky, tart notes for a tangy smoke perfect for anyone looking to depart from earthy, grainy OG and Cookies strains.

Sour Tangie is most popular along the Pacific Northwest coast, but it’s become a relatively easy strain to find around Denver. The Clinic, Colorado Harvest Company, Fox Cannabis, High West Cannabis, the Joint, Lightshade, Rocky Mountain High and The Green Solution have all carried the strain lately; your favorite cut might depend on your sensibilities. My top three come from the Clinic, the Joint and Kind Love (in no particular order). All have a perfect balance of tangerine and Diesel flavors, noticeable in even the sludgiest bong water.

Looks: Big, fluffy buds in the shape of footballs and fists show off the strain’s light-green color and open calyxes that are much like those of its parents.

Smell: Tart, tangy and sharp, Sour Tangie’s aroma has more citrus than gas, but its Diesel influence can’t be ignored. Powerful, sweet notes of tangerine and honeysuckle carry a sour tinge, with rubbery, skunky scents backing them up so that it’s not orange overkill.

Flavor: Although Sour Tangie’s taste is slightly less sweet than its fierce smell, the citrus train keeps running. Its stark orange flavor is like a poorly stirred glass of Tang, and a rubbery, skunky back end brings a welcome change of pace.

Effects: Sour Tangie isn’t quite as intense as Tangie, nor does it provide as much focus as Sour Diesel, but its high is more euphoric and relaxed than either, and it becomes very predictable after the first use. Its effects have been known to battle anxiety, depression and stress, eating disorders, nausea and minor pain.

Commercial grower’s take: “Fast in [vegetation] but pretty slow to bloom. Sour Tangie should take at least nine weeks to flower, but I think it yields more than either of its parents for us, so it’s worth the wait for a popular strain like that. But I wouldn’t recommend it for anyone who’s not used to sativas or tall plants, because this fucker gets tall fast within the first month. You have to be ready to top those leaves when you need to, or it’s going to lose a lot of weight. Not for the inexperienced or lazy.”