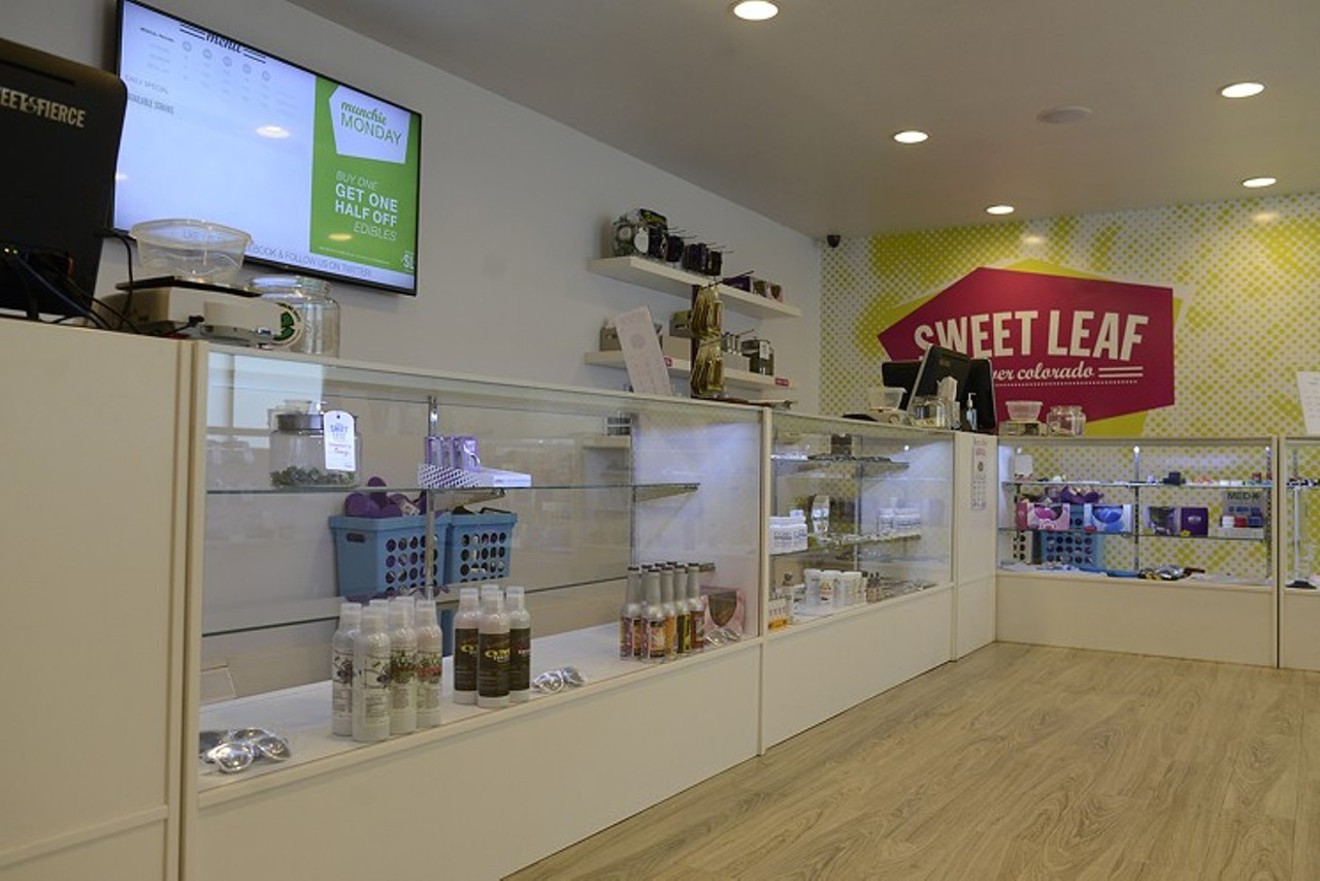 Sweet Leaf was once one of the largest dispensary chains in Colorado. Scott Lentz
Sweet Leaf owners Anthony Sauro, Christian Johnson and Matthew Aiken will serve jail time for their roles in the dispensary chain's scandal over illegal marijuana sales, ending over a year of legal battles between the company and law enforcement agencies.

Under plea deals with the Denver District Attorney, the three men will each serve one year in prison and face a year of parole and a one-year probationary sentence to run concurrently for charges under the Colorado Organized Crime Control Act, as well as felony marijuana distribution charges. The cannabis consulting and management companies they collectively own, Dynamic Growth LLC and AJS Holdings, will relinquish all assets and each pay fines of up to $125,000 on charges of organized crime and failure to file tax returns.

Sweet Leaf was once one of Colorado's largest marijuana brands, responsible for eleven dispensaries at one point. But a majority of its shops and production facilities were raided in December 2017 by the Denver Police Department after a yearlong investigation into the company for looping, or illegal pot sales. Those raids eventually led to Sweet Leaf losing all of its dispensary, cultivation and infused-product manufacturing licenses in Colorado.

According to prosecutors, the three men were aware of the looping, which allegedly led to nearly 2.5 tons of marijuana entering the black market in Colorado and other states.

“This case began thanks to a watchful citizen who observed the same people making multiple purchases of marijuana from a single Sweet Leaf dispensary in one day and tipped off the Denver Police Department,” Denver DA Beth McCann says in a statement. “The vast majority of Denver’s marijuana-industry businesses and owners are reputable and responsible and strive to obey our marijuana laws. However, Sweet Leaf is an exception. My office will prosecute those who do not comply with our marijuana laws.”

After complaints from neighbors and numerous stakeouts, Sweet Leaf budtenders were caught selling an ounce of marijuana to undercover DPD officers multiple times in the same day, which violates a Colorado law banning the purchase of more than one ounce of retail marijuana in a single day by the same person. Until 2018, however, the language in that law was vague; the disputed sales were conducted in 2016 and 2017.

Still, the state's Marijuana Enforcement Division had sent a memo to marijuana business-license owners in May 2017 explaining its interpretation of the language at the time: that customers couldn't buy more than one ounce per day, not per transaction.

At least eighteen budtenders were arrested in 2017 and 2018 in connection with the investigation; their charges have been dropped. In November, former Sweet Leaf vice president Nichole West and retail operations manager Ashley Goldstein both pleaded guilty to felony marijuana distribution charges related to the dispensary chain; each was sentenced to thirty days in jail.

According to DA communications manager Carolyn Tyler, looping customers could face charges in the case, but she declined to name any individuals. Sweet Leaf and its attorneys did not respond to requests for comment.

Sweet Leaf and its legal representatives argued that the looping sales were legal under state law at the time, despite the MED notice. They also argued that West even contacted the MED for clarification about the rule in 2016, before the MED's memo.

In an email exchange with former MED compliance officer Renee Rayton — who was indicted in 2017 for her alleged participation in an unrelated marijuana trafficking ring — West asked for clarification on the limit of marijuana transactions, asking how much time must separate them. Here is Rayton's response:

We are aware the statute says per transaction, which I (speaking for myself) take as a single sales transaction. According to 'higher-ups' at MED, if you do more than one transaction with an individual, you are sending them away with more than ONE OUNCE, which violates State Law of having more than one ounce on your person (even if that person has taken a transaction to their home or car). So...that is all the information I have regarding this rule.

West responded with a picture of a notice Sweet Leaf was handing out to customers that essentially put the responsibility on them for going beyond the one-ounce limit, explaining that employees could refuse service if they feel "like you are abusing the system."

Sweet Leaf handed out this leaflet to customers warning of possession laws.
Courtesy of Rob Corry
Although she pleaded guilty, West feels Sweet Leaf was unfairly targeted over a rule the state failed to fix. “It’s absolutely terrible what’s happening to these men. They are hardworking guys who genuinely care about their team and community," she says in a statement. "I hope this can serve as a learning moment for the entire industry to push for federal legalization, and that at the very least Colorado cannabis professionals demand change on the currently still-grey regulation surrounding 'transactions' in the state of Colorado.”

Both sides felt like the ambiguous conversation proved their respective cases, but Sweet Leaf's defense began to soften in October, when the company agreed to deals with the MED and City of Denver that called for it to part ways with all of its marijuana business licenses in Colorado, with Aiken, Johnson and Sauro also facing millions of dollars in fines and banishment from the state's pot industry for fifteen years.

Marijuana attorney Rob Corry, who represented Johnson, claimed that the DA was threatening to bring in federal prosecution for further charges if no agreement was reached. The DA's office wouldn't comment on the accusation, but in September, then-U.S. Attorney Robert Troyer threatened federal action against one of the state's largest dispensary chains for illegal sales. Troyer never said which dispensary chain that was, however, and no federal enforcement has taken place against a Colorado dispensary since then.

At the time, we reported that Sweet Leaf's agreement with the MED was part of a larger upcoming deal to be announced with the DA. While the DA never confirmed such an agreement, it looks like the final nail in the coffin for Sweet Leaf has been struck in Colorado.

Update: This story was updated at 11:40 a.m. Friday, January 25, to correct an error regarding additional Sweet Leaf employees facing future charges. According to the DA's office, only looping customers are still being investigated.
KEEP WESTWORD FREE... Since we started Westword, it has been defined as the free, independent voice of Denver, and we'd like to keep it that way. With local media under siege, it's more important than ever for us to rally support behind funding our local journalism. You can help by participating in our "I Support" program, allowing us to keep offering readers access to our incisive coverage of local news, food and culture with no paywalls.
Make a one-time donation today for as little as $1.