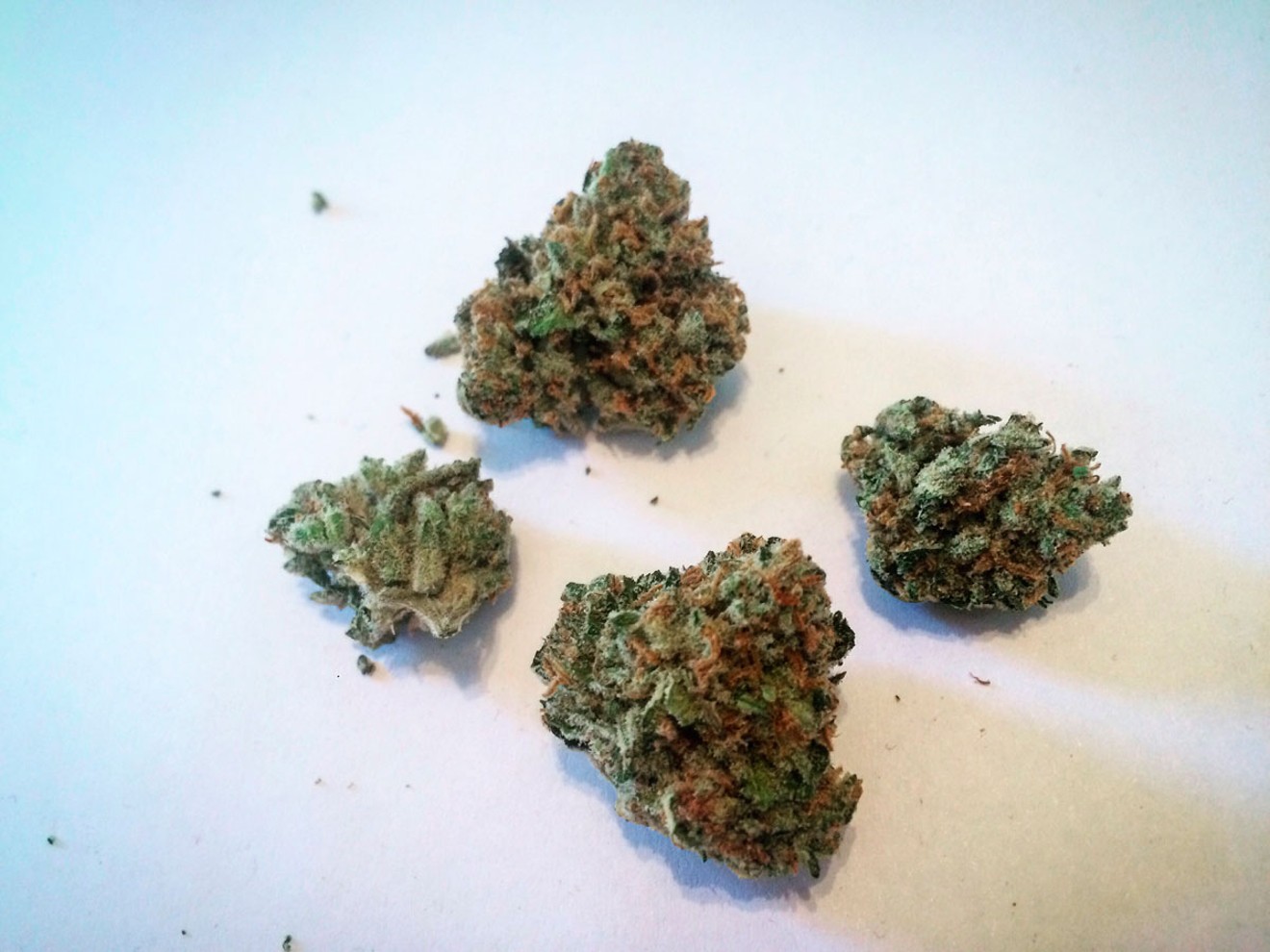 Get in the spirit with Ghost Train Haze. Herbert Fuego
When you walk into a dispensary and ask a budtender to recommend a strain, you’re basically asking this: “What is your strongest?” Although the recommended strains will vary from shop to shop, many budtenders will pull out their version of the THC titan known as Ghost Train Haze.

Ghost Train Haze is available in a few phenotypes; as with Gorilla Glue, each of them is numbered. Ghost Train Haze #1 is by far the most popular in Denver, and many dispensaries have dropped the “#1” altogether. A true hometown success story, Ghost Train Haze #1 was bred by Denver-based Rare Dankness from Ghost OG and Nevil’s Wreck (another Rare Dankness strain) genetics. The sativa-dominant hybrid won awards at the High Times Cannabis Cup in 2012 and again in 2014, and is a regular on lists of the world’s most potent strains.

Although it’s known for testing above 25 percent THC, Ghost Train Haze has more desirable qualities than other top testers, with a much more dynamic flavor profile than Gorilla Glue and more consistent sativa effects than Blue Dream. Needless to say, a little bowl will go a long way with the Ghost. Toked in moderation, it can make users feel uplifted and creative, motivating them to do anything from write a poem to climb a Fourteener. But overdoing it can also cause paranoia and bring on a harsh case of cotton mouth, so start light and go from there.

It’s always nice to see a Denver strain stack up with heavyweights from Southern California, the Bay Area or Europe, and Ghost Train Haze’s resin-glazed buds do more than that: They shine on their own. Growers can buy seeds from Rare Dankness, and buds are available at Ajoya, the Colfax Pot Shop, Healing House Denver, Green Man, Lightshade, L’Eagle and Medicine Man, among other Denver-area dispensaries.

Looks: Ghost Train Haze is a radiant bright green, but its visual appeal lies in its trichome coverage. (Don’t trust any variety without a thick white blanket of trichomes.) Nug structure should be tall and long with lanky limbs, but denser than a traditional sativa.

Smell: Also on the sativa end, the strain’s smell should be dominated by a tart citrus scent, followed by earthy, floral notes and rounded out by a classic and noticeable Haze spiciness.

Flavor: Ghost Train Haze has a sour citrus punch that’s similar to its smell. It’s a little zesty on the front, followed by earthy, spicy flavors, a reminder of its Haze genetics.

Effects: This strain delivers effects similar to other sativa heavyweights, bringing shots of energy and a case of the munchies, but possible paranoia, too. Medical patients use it for pain, lack of appetite, exhaustion and stress. Creatives use it in low doses for an inspirational rush.

Home grower’s take: “Super-strong sativa strain, and it’s pretty popular now. I think it has different phenotypes out there — they’re numbered, like Bruce Banner or Gorilla Glue — but I’ve never seen a number next to the clones I’ve bought. The high is incredible. It pumps me up if I smoke a little and gets me zonked out if I smoke a lot.

Commercial grower’s take: “A great creation by Rare Dankness, and I root for the Colorado-bred strains. My friends in Florida have had some amazing plants growing Ghost Train Haze outdoors, and I’d love to talk to guys in Pueblo or anywhere outside here to see how it does. The bud density depends on the phenotype, but #1 is the most popular, and that has long, dense buds. Takes a while to flower — like ten weeks on the short end — but the yields are above average, and it’s likely a top-five strain in terms of potency at any dispensary that has it.”

Is there a strain you’d like to see profiled? E-mail [email protected]
KEEP WESTWORD FREE... Since we started Westword, it has been defined as the free, independent voice of Denver, and we'd like to keep it that way. With local media under siege, it's more important than ever for us to rally support behind funding our local journalism. You can help by participating in our "I Support" program, allowing us to keep offering readers access to our incisive coverage of local news, food and culture with no paywalls.
Make a one-time donation today for as little as $1.